R. W. Fernstrum & Company is a third-generation, family owned business that manufactures heat exchangers, primarily for the commercial marine industry. In addition to its GRIDCOOLER line of keel coolers, it also manufactures and sells Weka Boxcoolers in the Americas and Tranter Heat Exchangers.
“The origins of our product lines have been a foundation for our success,” said Sean Fernstrum, current president and an owner of R.W. Fernstrum & Company, in assessing the creation of the company by his grandfather 65 years ago. “The GRIDCOOLER Keel Cooler was developed to solve a cooling problem for landing craft during WWII. My grandfather, Robert Fernstrum, was the chief engineer at Gray Marine and Continental Motors during the war. Gray Marine built landing craft and needed to devise a compact closed-circuit cooling system to meet the needs of a wide range of operating conditions. Existing cooling systems were far too large for landing craft, so Robert developed a solution on his own. His compact keel cooler was the prototype for what would become our GRIDCOOLER Keel Cooler line.”
R.W. Fernstrum also offers the Weka Boxcooler, which was a development of Cees de Kwant in the Netherlands. After reviewing the construction of existing box coolers in the industry, Cees saw the inherent weakness in the materials being used in box cooler construction. His solution was to utilize a material that had proven itself in decades of use in other products working in the same environment: copper-nickel. His use of this material and innovative creation of easily applied protective devices make this product line stand out. In addition it offer Tranter’s line of heat exchangers that go back to Ransom Olds and his development of chilled plates used in milk wagons 100 years ago. Today those plates are providing efficient heating of cargo in applications like petroleum and sulfur barges. Tranter Heat Exchangers also provide cooling in applications like live wells on commercial fishing boats. These heat exchangers along with various plate and frame offerings allow Fernstrum to provide a wide variety of solutions to its customers.

2014 & Beyond
“Overall, 2014 has been a positive year for Fernstrum,” said Sean Fernstrum. “There is still growth in the U.S. offshore market; a positive for many in the industry. We have seen growth in other segments as well, tank barges and alternative energy. The changes in the engine tier ratings have been a challenge over the last few years; but we are adapting.”
Looking ahead the company sees plentiful opportunity. Particularly, the emerging inland market segments and existing offshore segments are at or near capacity for the near future,  signs that 2015 along with the next few years should be good for the U.S. commercial marine market.

Innovation to Come
Fernstrum will focus on reintroducing the Tranter Platecoil line to the inland marine market; a product line that the company represents in the marine industry. “Platecoil is proving to be an efficient, cost effective heating solution for barges and bulk cargo vessels,” said Sean Fernstrum, “and we are looking to reintroduce this solution to a wider audience in the upcoming year.
When evaluating the innovation coming from his Menominee, Mich., shop, Sean Fernstrum lays the credit to the company’s employees in executing the vision, year in, year out. “I think our commitment to a hardworking and knowledgeable employee base along with a focus on problem solving are two of our greatest strengths,” said Sean Fernstrum. “It is a formula for success that has proven itself for decades. We sell solutions, not just a product. Our customers’ relationship with us doesn’t end with a signed purchase order, that’s just the beginning of what I hope will be a long and mutually beneficial relationship.”
While the company’s core product line was born out of combat necessities created in World War II, the company’s focus for decades has been the commercial marine industry. Starting with shrimp boats in the Gulf of Mexico back in the 1950s, it quickly moved to push boats, tugs and other commercial vessels. While it does have land based applications, the commercial marine industry is clearly the market driver for the company.
“The maritime industry is our home,” said Sean Fernstrum. “Over the years, the hardworking people in the industry have become our friends, family. We spent hours working on projects to come up with reliable solutions for their applications. It is our customers that allow us to continue to strive in the industry.” 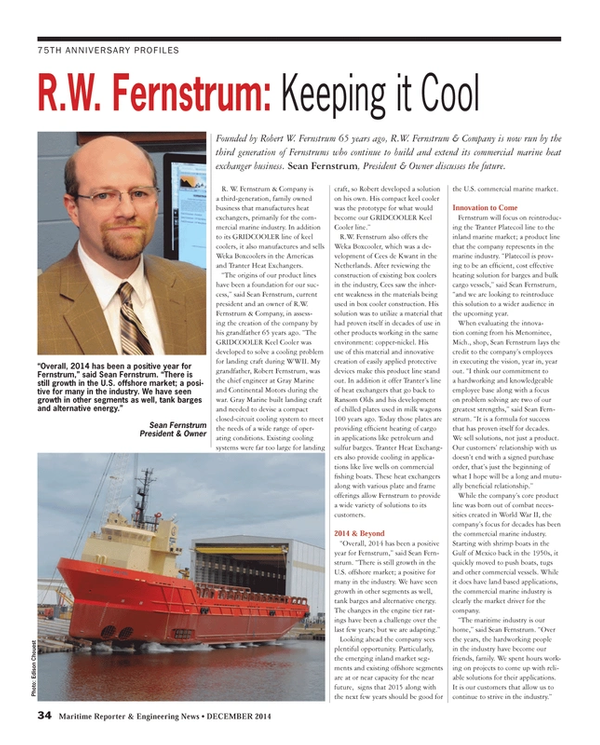