In 2011 Harvey Gulf International Marine became the first U.S. vessel operator to contract for construction of vessels by LNG. The first of these vessels to be delivered is the Harvey Energy. In addition to being able to operate on cleaner burning natural gas, the Harvey Energy  has “ENVIRO+, Green Passport” Certification by the ABS. The requirements for this certification include that the vessel be continuously manned with a certified Environmental Officer, be completely constructed with certified environmentally friendly materials and have advanced alarms for fuel tanks and containment systems. Along with the Enviro+, Green Passport notations, these LNG powered OSV’s will be the most environmental friendly OSV’s in the North America. When operating on LNG, the Harvey Energy meets the highest environmental emissions standards, and Harvey Energy will exceed the EPA Tier 4 emission requirements that are to take effect on January 1, 2016. Harvey Energy is diesel-electric and powered by Wärtsilä 6L34DF dual-fuel-diesel gensets. Three of them produce a total of 10,100 bhp. They will power two azimuthing stern drives: Wärtsilä LIPS units producing 3,620 bhp each. The vessel has two bow thrusters: LIPS FT225 M-D units producing 1,717 bhp each.  A challenge in designing a boat to run primarily on LNG is onboard LNG storage. Since LNG contains less energy by volume than diesel oil, the LNG tanks have to be significantly larger to give the vessel the same range as with conventional diesel. Harvey Energy has a single 100 ft. long cylindrical LNG tank located along the centerline under the cargo deck just aft of the house. Harvey Gulf selected Gulf Coast Shipyard Group to build the first six of these historic vessels. 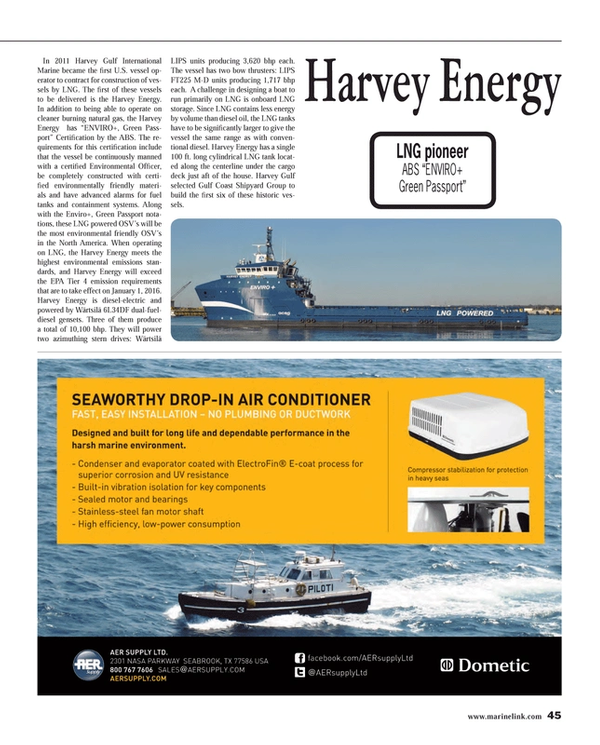