MAN Diesel & Turbo has developed a lead in the supply of modern engines with dual fuel capability. Here we speak with the company’s Ole Grøne, SVP, Low-Speed Promotion and Sales, for his insights on the company’s future trajectory.

Simply put, MAN Diesel & Turbo is all about power with one of the world’s premiere line-up of product, services and systems. The company invests regularly and mightily in R&D to ensure that it is on the leading edge of power solutions.
“We place a particular focus on R&D and see the refinement of our existing technology and, especially, the introduction of innovation to the diesel concept, as the only way of assuring our future,” said Grøne. “A great part of our current strategy is the expansion of our dual-fuel concept and the development of engines that satisfy every industrial niche and have the potential to run on a growing variety of fuel types.”
Case in point is the company’s lead position in the supply of engines fuelled by LNG to power a burgeoning fleet of new ships, a development that will help ship owners to dramatically reduce emission while potentially saving fuel costs.
“Looking back at 2014, I think MAN Diesel & Turbo’s primary success within the low-speed market has been the very positive development of our low-speed, dual-fuel ME-GI engine,” said Grøne. “Since its introduction it has really captured the market’s imagination with the result that our order book now stands at over 70 units with more, identified orders to come.”
The year 2014 was also significant as it saw the completion of the first ME-GI unit at Doosan with a successful Factory Acceptance Test confirming the viability of the ME-GI concept. The ME-GI has added important references such as the first gas-powered car carrier for United European Car Carriers. Another important reference includes the expansion of the number of fuel types that the ME-GI can run on to include ethane, and in a variant of the GI concept, the LGI engine using methanol and, later, LPG.
Companies such as MAN Diesel & Turbo are an excellent bellwether of the overall market in general, and signs point to a sustained market.  “Our Two-Stroke licensee reported that the order book for low speed engines has obviously slumped since its historic peak in 2009 but 2014 showed a determined upturn in the curve and a definite, positive trend,” said Grøne. “Simultaneously, in terms of manufacturing, there is still plenty of two-stroke engine capacity. Therefore, overall, I think we can only be positive about the future. However, regulatory changes, triggered by enhanced environmental awareness in the marine market calls for an even more intensified and costly development effort.”

Looking Far Forward
With large, capital intensive systems such as propulsion, long-range planning is as critical to success as near-term performance. “We are looking ahead to 2015 but, of course, also much further forward than that,” said Grøne. “If, as predicted, the world commercial fleet is to grow by 100% over the next 20 years, than this means 1,500 -  2,000 new ships will be added every year, which means some 25,000,000 more kW will need fuel every year. The big question arising from this is: which fuels and what technology?”
Obviously, the Tier III emission regulations for NOx and SOx now to be enforced in the North American NECAs and in SECAs are going to have a major effect on the marine market.  “Through primary measures and refinement of our existing diesel technology, our entire engine portfolio has already been Tier II-compliant for several years,” said Grøne.
However, to meet the even stricter Tier III requirements, secondary measures will be necessary.
“Fortunately, we already have the necessary technology in place, much of it integrated within the engines, and I am confident that the market will take even more to our solutions than they already have. Primary among these are our SCR (Selective Catalytic Reduction) and EGR (Exhaust Gas reduction) systems for NOx control. Implementation of these on board will be a major task in the future for the industry,” said Grøne. In the coming year, MAN Diesel & Turbo has no major new product introduction imminent, rather it will continue on its path toward developing and refining its power products to meet immediate needs and long-range projections. “I would say that the intention is not so much to introduce further, new products or services but, rather, to continue rolling out what we have already set in motion,” said Grøne. “We expect the order for the 100th ME-GI engine to be announced during 2015. Our G-series of engines, characterized by their significant contribution to lower CO2 emissions, will also shortly reach order number 1,000 less than five years after first being announced. The ever-expanding fleet of engines of our design will be looked after by  MAN PrimeServ, our after-sales division, who will also be kept busy by a number of significant projects involving the conversion of two-stroke, HFO-burning engines to dual-fuel running following the ME-GI concept, and other large retrofit projects for applying new technologies to the existing fleet.”
For the increased retrofit activity anticipated at PrimeServ, the company developed a host of products, the most recent from this year being MAN EcoCam. The EcoCam is a hydraulically controlled, variable exhaust-timing solution that enables a variable cam profile without any mechanical modification of the camshaft. When it is active, the engine can run at a lower load with reduced fuel consumption. It can also be deactivated whenever necessary, allowing the engine to run at full load. We also expect an increased activity in replacing older propellers with the more efficient, MAN Kappel-designed propellers. 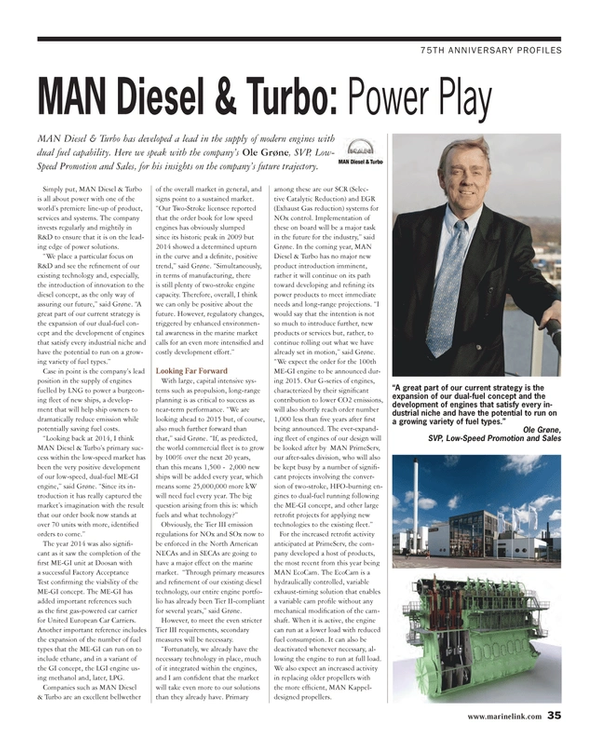