NASSCO: The Face of US Shipbuilding

General Dynamic’s NASSCO in San Diego arguably has the most diverse and enviable shipbuilding backlog in the U.S., with its navy and commercial orderbook stretching out for three years. With the yard humming at record pace, we sat down with Kevin Graney, VP & GM in San Diego to discuss how he and his team intend to keep the momentum rolling forward.

General Dynamics National Steel & Shipbuilding Co. – NASSCO – has quietly become the face of U.S. shipbuilding, deftly balancing a newbuild and repair workload with the U.S. Navy while simultaneously amassing arguably the strongest commercial orderbook, a commercial backlog which includes eight tankers and two containerships, the latter being the world’s first LNG-fuelled containerships for TOTE.
“To me the key is having that ‘open kimono’ approach with the customer,” said Graney in explaining how NASSCO is able to juggle a navy and commercial workload in the same facility, a feat that many shipbuilders have tried and failed. “Whether they are government or commercial customers, it’s about getting the details nailed down as soon as possible.”
As any shipbuilder can attest, money is made or lost in the planning stage, with changes to the ship growing more costly with each passing day. That’s why Graney is particularly proud of the company’s performance on the U.S. Navy’s Mobile Landing Platform (MLP), two of which are delivered with the third variant floated out early last month.
“There were a lot of commercial best practices that we incorporated into the MLP program and it worked great,” said Graney. “So here we are, we have a lead ship –  a navy lead ship – delivered with only 2.5% re-work, which is unheard of in the Navy: fixed price, on schedule, under budget. So we took a commercial model, applied it on the government side and made it work.”
While the MLP – Lewis B. Puller – is the third in the series, in some respects it has lead ship qualities as it is designated MLP 3 / AFSB, the first to be equipped with a flight deck, a hangar and accommodations for about 250 people. This variant is designed to conduct mine countermeasure warfare with the Navy, with space available to support special ops.
The third ship’s flexibility and affordability comes courtesy of its flight deck, a flight deck which is geared towards helicopters, but can also support as many as four MV22’s, according to a recent study of the space. So with its lift capacity, flexibility and price tag, the ship is  viewed as a tremendous value for the investment.
“The MLP is really like the Ford F150 pick-up truck; you can put anything you want in the bed; in this case we put a flight deck on it,” said Graney. “It is a versatile platform, and it’s exciting for us because the demand signal looks in our favor. This was a three-ship program a few years ago; we’re in the process of negotiating the fourth ship; and this year the Navy put in a fifth ship. We’re keeping our fingers crossed on that fifth ship.”


The TOTE Ships
The pair of LNG-fuelled containerships being built for TOTE dominate the San Diego shipyard, both being built  on the yard’s incline shipbuilding ways. At the time of our visit in mid-November, the ships were  72% and 33% completed, respectively.
“I can’t believe how quickly that ship is coming together,” said Graney. “Last week we lifted 3000 tons in the shipyard, most of that on the TOTE ships; which is the most steel blocks that we have erected in a week.”
Graney said that DSME – the Korean builder with whom NASSCO has had a close relationship with for nearly a decade – “thought we were nuts” for building these ships on the incline ways, because being perfectly square is crucially important when building a containership, and throwing in a 2.5 degree angle is not the optimal build solution. But the shipyard’s graving dock, which was designed for the construction of tankers and is relatively shallow, was not suited for the ships, so the choice was made. Graney admits there was some concern at the outset: “We were worried about the longitudinal strength members of the containership. We had to make that highly accurate; that’s up to 65mm steel. We built a jig for the transverse bulkheads as well for the cell guides, so the cargo holds have come out very accurate.”
Though the shipyard had not built a containership in nearly 20 year – and it had never built any LNG-fuelled vessel –  it had little to no concern that it would be done successfully and efficiently, leaning on its partnership with DSME for timely insight and advice.
“We’ve learned that LNG really isn’t rocket science,” said Graney. “Yes it is a cryogenic system; yes it is a high pressure system, but we know how to build those. It isn’t something that takes us out of our core strengths as a shipbuilder. I think the testing program will challenge us a little bit, there’s a little bit of risk there, but that’s something we’re looking at very hard right now.”
“Part of the beauty of the relationship that we have with Korea is that they have such a handle on state-of-the-art marine equipment,” Graney continued. “We’ve had no issues in terms of manufacturing and first article testing and shipping (to San Diego). The ME GI engines have both passed their first article tests. MAN is committed to making sure these engines are the benchmark for LNG engines, so we’ve gotten a lot of cooperation from them. And even the fuel gas system (FGS) is a DSME creation, designed and patented by them, and has already been in operation over there.”
As the ships have progressed at NASSCO and additional orders for more LNG-fuelled vessels have been placed around the world, questions and concerns surrounding the fuel itself are starting to fade, said Parker E. Larson, Director, Commercial Programs, NASSCO. “We don’t have a conversation (with a shipowner) today where LNG does not come up. People now realize it’s something that you can put on a ship. I don’t see much worry surrounding LNG other than the concerns such as ‘what is the cost to put it on’ and ‘where do we go to get the supply.’”
In fact the most concern for NASSCO concerning the LNG system was not the technical system, rather the increased U.S. Coast Guard involvement and oversight of the project given its unique nature. “We were concerned about the Coast Guard involvement on this,” said Graney. “We always go with ABS in this yard, and we go with the Alternate Compliance Program that ABS offers in acting for the Coast Guard.  When LNG came along, the Coast Guard allowed ABS to handle the things that were typical shipbuilding matters, but when it came to LNG they wanted some oversight. But Graney and his team approached this as they approach all business relationships: straight-forward with all cards on the table … or “open kimono” as Graney likes to say, and “even though we have this extra chef in the kitchen, it has worked out very well.”

The Path Ahead
While the TOTE containerships have garnered many of the recent headlines, NASSCO is perhaps best suited to build tankers and currently has eight tankers on its orderbooks, including for SEA-Vista a series of three ECO Tankers that last month started construction. SEA-Vista LLC is a joint venture between Seacore Holdings and Avista Capital Partners. The tankers on order are 50,000 dwt, measuring 610-ft. long with 330,000 barrel cargo capacity. The LNG-conversion ready Jones Act tanker series was designed by DSEC, a subsidiatry of Daewoo Shipbuilding & Marine Engineering (DSME). The ECO MR tanker is designed for fuel efficiency courtesy of optimized hull design and the inclusion of the G-Series MAN ME slow speed main  engine, dual-fuel capable with the ability to accommodate the future installation of an LNG fuel-gas system and tanks.
The vagaries and uncertainties of shipbuilding and repair markets makes forward planning – for even the most seasoned veteran – part art, part science, part luck. When asked how long he sees the current run U.S. shipbuilding bull market, Graney was blunt; “if you would have talked to me two years ago, I would have told you that we would not build another tanker for five years or so. Well here we are today, and we have eight in the backlog.”
While the shipyard is filled and bustling with work, Graney figures that it has not reached its capacity. NASSCO asked its DSME colleagues to evaluate yard ‘as is’ and, while the ship type mix is a critical factor in determining total yard output, “if we’re talking about product carriers, they think we could do nine ships per year. We have eight tankers in the backlog, and in 2016 we’ll deliver six tankers, and that’s the most we’ve ever done in our history.”
While the current situation is impressive, Graney and his colleagues are not likely to rest on their laurels, and he considers maintaining a strong, steady order book one of the chief challenges of his job. “My main challenge? How do we sustain this. We have 11 ships in the backlog which will sustain us for three years, which is the longest time horizon apart from T-AKE that we’ve ever seen. When we’re building commercial ships, being able to see three years out is big,” said Graney.
“So the big challenge: We are hiring all of this fresh young talent, developing them rapidly, but it won’t mean anything if we don’t have work beyond the next three years to help retain them and their skills. How do we keep those guys gainfully employed in this business? That to me a challenge.”
He’s not alone. 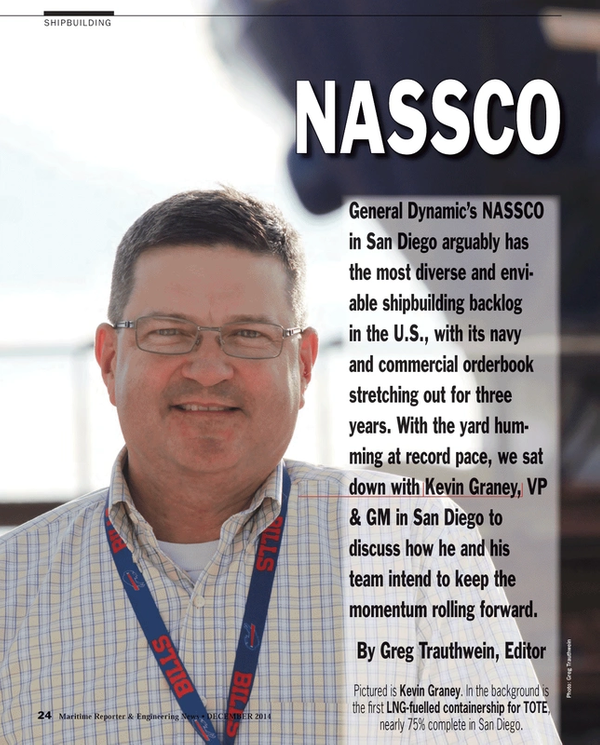 Read NASSCO: The Face of US Shipbuilding in Pdf, Flash or Html5 edition of December 2014 Maritime Reporter