Seven years ago, I authored an article on quarantine and isolation.  With the outbreak of Ebola virus disease (EVD) in West Africa, it is time to dust off and update that article.
The concepts of quarantine and isolation lie at the juncture of medicine, law and public safety.  When these concepts intersect with the maritime community, things quickly get both interesting and complicated.
Quarantine and isolation have been invoked in cases of communicable diseases throughout human history.  Special treatment of lepers is mentioned in the Bible.  During the Middle Ages, the Venetians required ships arriving from suspect areas to anchor out of port for 40 days, based on the assumption that any disease on board would run its course during that time.  Modern quarantine and isolation are more sophisticated, but only slightly.  The outbreak of severe acute respiratory syndrome (SARS) in 2002 revealed the difficulty of instituting efficient and effective quarantine and isolation protocols in an interconnected world village.  EVD, and its isolated occurrence in the United States and Western Europe, have provoked fresh reactions.  Other illnesses, such as avian flu and Middle East respiratory syndrome (MERS), present their own challenges.
Congressional hearings have been held.  Some members of Congress have called for travel bans.  Health agencies and law enforcement agencies are re-examining their procedures and their authorities and have commenced enhanced monitoring of arrivals.  The U.S. Coast Guard and sister agencies in other port states have issued requirements for and reminders relating to disease reporting.  New regulations and enhanced utilization of existing protocols should be expected.  Concern about a possible pandemic caused by an emerging disease is growing.

Definitions
Now is a good time to define some terms.  “Epidemic” is the widespread occurrence of a disease.  A “pandemic” occurs with the outbreak of a new contagious disease that causes death or serious illness in large numbers of persons.  EVD is not considered to be likely to develop into a pandemic.  While highly virulent with a death rate of about 50% among those infected, it has a low capacity for contagion.  SARS is a recent example (but fortunately was stopped before becoming widespread, making it an epidemic rather than a true pandemic), but the Black Death in the Middle Ages, the so-called Spanish flu in 1918-1919 and flu outbreaks in 1957 and 1968 are other examples.  “Isolation” involves the separation of a person who has been diagnosed with a specific infectious disease from those who are healthy and a restriction of the movement of that individual to stop or deter the spread of the illness.  In most cases, isolation is voluntary, but authority exists for compulsory isolation if proven necessary.  Persons in the United States diagnosed with EVD have been placed in isolation.  “Quarantine” is the separation and restriction of movement of persons who, while not yet ill, may have been exposed to an infectious agent.  As with isolation, quarantine is generally voluntary, but may be enforced when and if necessary.

International Impact
SARS, which was first identified in southeast China and Hong Kong in late 2002, provides a good example of a potential pandemic and the impacts that flow therefrom.  While governments did not impose mass quarantines and isolations, travel was effectively restricted and commerce was impaired.  The SARS epidemic caused over 8,000 reported cases of the condition, including almost 800 fatalities.  In China, Hong Kong, and Southeast Asia during the height of the epidemic (second quarter of 2003), the gross domestic product of the affected nations is estimated to have dropped 2% on average.  If a pandemic were to occur in the near future with the same severity as SARS, but not so limited in geographic impact, the World Bank estimates an economic impact of approximately $800 billion.
EVD has had less, but noticeable, impact on travel and trade.  Various airlines have ceased regular flights to the affected West African countries.  Maritime trade has been restrained for ports in the region.  Owners, operators and traders have started inserting into charters and other contracts clauses to address the threat of EVD, seeking to minimize the risk of delay if a vessel after calling at a port in West Africa transits to other ports.  If delay occurs, some clauses allocate in advance the financial liability that ensues.
Justifiably, concern about a potential pandemic is widespread.  The World Health Organization (WHO), a sister agency to the IMO within the United Nations, implemented new and enhanced International Health Regulations on June 15, 2007.  The regulations are intended to provide for improved procedures for addressing significant health emergencies and address a wider range of medical conditions than previously. Among other things, the revised IHR provide for a declaration of health by ships and for minimum sanitary conditions for cargo loading areas, including areas where shipping containers are packed.  Following the EVD outbreak, the WHO issued biorisk reduction guidance, but has specifically stated that bans on travel and trade are inappropriate.  The IMO has endorsed the WHO position.

United States Approach
In the United States, isolation and quarantine are generally matters for state and local health authorities and law enforcement agencies.  Only when the problems involve interstate and international movement and exceed the ability of local control do the federal authorities normally step in.
At the federal level, quarantine and isolation are primarily the responsibility of the Centers for Disease Control and Prevention (CDC).  The CDC is empowered to detain, medically examine or conditionally release individuals reasonably believed to be carrying a communicable disease.  The list of quarantinable diseases is established by a 2003 Executive Order, which was amended in 2005 to include “influenza caused by novel or reemergent influenza viruses that are causing, or have the potential to cause, a pandemic” and in 2014 to redefine severe acute respiratory syndromes.  As of the date of writing this article, EVD has not been added to the specific list.  Isolation or quarantine, though, may be ordered by state or local authorities if appropriate.

Changes in Regulations
In recent years, the quarantine and isolation regulations have been amended several times.  The changes, among other things, make it easier for the CDC to require a ship clearing or departing a foreign port bound for the United States to obtain a bill of health from the US consular officer for that port setting forth the sanitary history of the vessel.  The CDC can also suspend, in whole or in part, entries and imports from designated foreign countries or places.  This would be done when the CDC Director determines that the risk of introduction of a disease into the United States is increased by the introduction of persons or property from such foreign countries or places.
Operators of ships on international voyages are required to report deaths or illnesses prior to arrival.  Operators are required to report not just persons on board with a designated communicable disease, but persons defined as ill, meaning a person who: (1) has a temperature of 100.4°F (38°C) or greater accompanied by one or more of the following: rash, swelling of lymph nodes or glands, headache with neck stiffness or changes in level of consciousness or cognitive function; (2) has a temperature of 100.4°F (38°C) or greater that has persisted for at least 48 hours; (3) has more than common diarrhea; (4) has severe bleeding, jaundice or severe persistent cough accompanied by bloody sputum, respiratory distress or a temperature of 100.4°F (38°C) or greater; or (5) displays other symptoms or factors that are suggestive of communicable disease.
Arriving vessels are subject to inspections and sanitary measures may be directed if there is evidence that the ship or something on board is or may be contaminated with a communicable disease.  The ship may be detained until satisfactory sanitary measures have been completed.  The owner of the ship would bear any expenses relating to sanitary measures and detention.  In the case of animals, articles or things on board the ship, any expenses relating to detention would be borne by the owner thereof.
The CDC may, at U.S. ports, conduct screenings of arrivals to detect the presence of ill persons.  Any person reasonably believed to be infected with or exposed to a quarantinable disease may be provisionally quarantined.  If evidence (such as diagnostic tests) indicates that an arrival is infected with or has been exposed to a quarantinable disease, the CDC may issue a quarantine order to that person.  A person for whom a quarantine order has been served may not be required to undergo medical treatment, but may be subject to movement restrictions throughout the period of incubation and communicability of the disease.
Persons violating the quarantine laws and regulations would be subject to a fine of up to $250,000 or one year in jail or both.  Violations by organizations could result in a criminal fine of up to $500,000.

Port State Measures
Various port state administrations, including the U.S. Coast Guard, have adopted measures intended to reduce the risk of introduction of EVD via maritime vectors. The Coast Guard issued a notice reminding owners, operators and masters of the obligation to report hazardous conditions on the vessel prior to arrival.  The Coast Guard considers an ill person on board an arriving vessel displaying symptoms of EVD to constitute a reportable hazardous condition.  The agency also monitors advance notices of arrival to determine if a vessel has visited a CDC-designated EVD country within the previous five port calls.  Other port administrations, including France, the Netherlands, Singapore, Spain and the United Kingdom, have adopted similar measures.

Summary
The real penalty regarding communicable diseases such as EVD is not government-imposed financial sanctions but the potential disruption in maritime trade.  Due to the potential reduction in international trade resulting from communicable diseases, many ships would be without cargoes (and possibly crews, support personnel and bunkers).  Ships could end up delayed in departure ports because the arrival ports are not accepting ships therefrom.  Alternatively, the ship could be required to anchor out for an extended period awaiting clearance – recalling the ancient quaranta giorni or 40 day delay imposed by Venice.  All of this would add fresh meaning to the concept of “restraint of princes.”

The Author
Dennis L. Bryant is with Maritime Regulatory Consulting, and a regular contributor to Maritime Reporter & Engineering News as well as online at MaritimeProfessional.com.
t: 1 352 692 5493
e: dennis.l.bryant@gmail.com 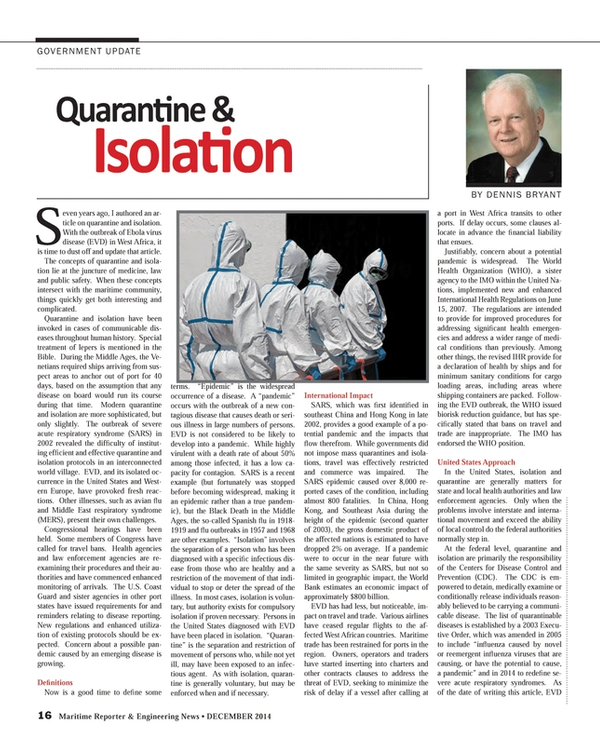