Austal’s U.S. operation consists of more than 4,000 employees supporting the design, construction and sustainment of two U.S. Navy programs, the 127-meter, trimaran Independence-variant Littoral Combat Ship (LCS) and the 103-meter, catamaran high-speed troop and equipment transport known as the Joint High Speed Vessel (JHSV). Austal has block-buy contracts in place for both programs totaling over $5 billion. In the past year, it has  delivered the Jackson (LCS 6), USNS Fall River (JHSV 4) and USNS Trenton (JHSV 5).
Construction began on two LCS and two JHSV and Austal christened and launched two ships from each program as well. Delivery for USNS Brunswick (JHSV 6) and the future USS Montgomery (LCS 8) is scheduled for late 2015.
Five of 10 JHSVs have been delivered and three more are currently under construction. Three of 12 LCS have been delivered and six LCS, part of the 10-ship block-buy contract, are under construction at Austal’s Mobile, Ala. manufacturing facility. According to Austal USA President Craig Perciavalle, “We’re pleased with how well our ships are performing once delivered, how well these programs are maturing, and how well our performance continues to improve ship to ship.”
Regarding the future outlook for Austal, Perciavalle said, “The Navy shipbuilding plan has us delivering LCS’s into 2025. In addition we’re excited about the potential growth of the JHSV program given the feedback we’ve received from the fleet so far and the fact that two additional JHSVs have been appropriated and about growing our sustainment business to support our ships as they are delivered and enter the fleet to serve our country.”
Austal’s latest facility expansion project is its Vessel Completion Yard (VCY), a 36-acre facility at the northern tip of Pinto Island on the eastern bank of the Mobile River. When fully constructed, the completion yard will boast a protected 1,000 x 300 x 1,400-ft. u-shaped slip with four wet berths, two on each side of the slip. The berths will provide services for the ships during completion, sea trials and delivery, and post-delivery activities through sail away. Austal plans to invest $73 million into the VCY with much of that going back into the local economy.  The first of three phases required to complete the project - 800 feet of berth with services - is scheduled to be completed mid-2016.
This past spring, Austal honored 48 employees who graduated from our four-year employee apprenticeship program which is certified by the U.S. Department of Labor, Alabama Department of Postsecondary Education, and the Alabama Department of Veterans Affairs. It is governed by the Department of Labor Standards of Apprenticeship for the respective trades of pipefitter, marine electrician, fabricator, and fitout. The Alabama Department of Postsecondary Education has approved Austal’s four trade programs for the Department of Veterans Affairs which means that all eligible veterans may receive GI Bill benefits earned during military service.  Austal is proud to say that the retention numbers for these apprenticeship classes were above regional averages for other apprenticeship programs in our area. A new class of 85 apprentices began their four-year journey in June. 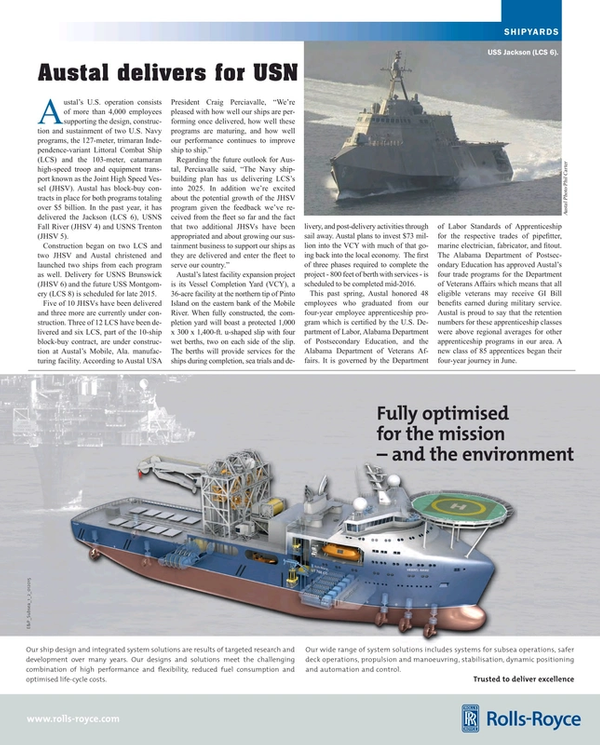