With the publication of the 2015 Rules for Building and Classing Steel Barges, ABS has amended the rules to require the submittal of a steady state temperature distribution for Oil Tank Barges that carry heated cargos at temperatures greater than 50°C (122°F) and a structural assessment to determine the resulting thermal stresses in barges where the steel temperature is expected to exceeds 50°C (122°F). While similar requirements have been in place for several years for chemical tank barges, the expansion of the requirement to include oil tank barges (which includes asphalt barges) is expected to significantly increase the demand for advanced analysis to evaluate the steady state temperature distributions in integrated double hull tank barge structures, and the thermal stress resulting from the large thermal gradients generated between the heated cargos and significantly cooler external sea water.
With the increase in the classification requirements for oil tank barges comes the need for additional guidance on the use of advanced analysis tools to satisfy the ABS requirements. While ABS does not currently have published guidance on the use of Finite Element Analysis (FEA) for the calculation of temperature distributions or thermal stresses, they are currently working to develop a guidance note for thermal analysis. At a February 2015 FEA Seminar and Workshop presentation in New Orleans, ABS presented their ongoing work to develop guidance for the use of advanced analysis in thermal stress assessment, and provided several examples of the successful work performed by naval architecture and marine engineering firm, Viking Systems International, Inc. The examples provided by ABS showcased the process developed by Viking over the past 15 years to leverage existing advanced analysis tools along with in-house developed SAGA software to load and evaluate the structure for the combined effects of the thermal loads with traditional hydrostatic and seaway loads.  (Image: steady state temperature distribution plot)
Viking Systems International Inc has worked with shipyards, designers, and owners of heated cargo barges and tankers over the past 15 years to develop a methodology for the prediction of the steady state temperature distribution through the double hull structure. Viking has worked with thermal measurements from several barges in service to correlate with the numerical predictions, and validate the methodology.  The advanced analysis method incorporates solid elements into a global finite element model to represent the boundary layer of the heated cargo and the external seawater and air, as well as the stagnant air within the empty ballast tanks and above the cargo level in full tanks. The finite element model is then used to solve for the accurate thermal gradients between the project specific cargo core temperature, and the ABS required external air temperature of 5°C (41°F) and a sea temperature of 0°C (32°F).
Hydrostatic and hydrodynamic seaway loads are calculated with a full hydrodynamic analysis for the barge in a realistic extreme sea state and combined with the thermal loads for a series of critical load cases developed to maximum global and local design loads on the structure. The finite element model is solved, and the resulting stresses are evaluated against the appropriate acceptance criteria from the classification society. To optimize the design and verification efforts, SAGA is paired with other industry leading software and can account for various regulation standards throughout the industry (ABS, DNV-GL, or BV for example). For the majority of these projects in the US, the acceptance for both yielding and buckling are evaluated in global FEA models with the ABS Dynamic Loading Approach (DLA) Guide and ABS Steel Vessel Rules (SVR), respectively.
As these rules begin to develop, the finite element analysis will be an integral part of solving the complex interaction between thermal loads and tradition barge hydrostatic and dynamic seaway loads. Methods have shown the ability to accurately predict the thermal distribution of real world operating barges. The development of custom analysis tools put in place has efficiently streamlined this complex process to generate a more efficient approach while satisfying the increase class requirements, compared to previous traditional methods.

The Author
Fritz Waldorf is Director of Sales and Marketing for Viking Systems International, Inc. Viking Systems has been assisting shipyards and ship designers worldwide with the efficient implementation of advanced analysis tools in the floating vessel design process.
e: [email protected] 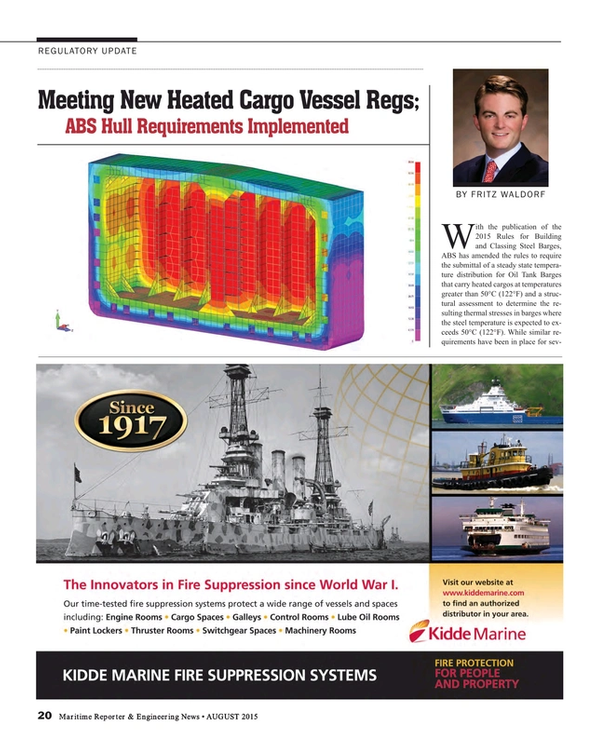