The General Ship Repair Corporation, a fixture on the Baltimore water front for nearly a century, continues to build a strong business while preparing for fourth generation ownership.


General Ship Repair Corporation is as ubiquitous of a presence on the Baltimore waterfront as Under Armour, Domino Sugar and “Natty Boh.” General Ship Repair has stood strong for nearly a century since its founding by Charles “Buck” Lynch in 1924, evolving today into the de facto ‘go to’ for workboat repair in the Baltimore area. Today it is in the midst of a strong year, and per its history it invests in its people and facilities with an eye on the future, a future which is planned to include a fourth generation of Lynch leadership.
In its time the company has serviced schooners and steamships, paddle wheelers and super tankers, as well as everything in between. Today though, providing repair and maintenance service to the regional workboat market with its pair of 1,000 ton floating docks is the heart and soul of its business.
Today the company is owned and operated by a trio of Lynch brothers: Charles F. “Derick” Lynch, Cary B. Lynch and Michael Lynch, who took over from their father Charles “Jack” Lynch in the early 1990s. In the management wings are two of Derick’s sons, Charles (Chaz) Lynch and Ryan Lynch. Chaz Lynch served in the U.S. Coast Guard for four years before deciding his fate lie in the waterfront shop his great grandfather pioneered. Mid-stream in his USCG stint he switched to the mechanical side of the operation. “He called me two year in and said that he really wanted to come back and work at the shipyard,” said Derick Lynch. “And I told him ‘you’re a deckie … I don’t need a deckie, I need a machinist.” Today Chaz serves the company as a foreman and machinist.
Ryan Lynch graduated from the United States Merchant Marine Academy, and today works in the yard as a project manager, working part-time for the moment in between his sailing at sea obligations.
‘Self-Sufficient’ is perhaps the best term to describe the yard, its management and its team of 45, a focused group available 24/7/365 to its workboat clients that depend on it to keep its equipment functional and in the water earning money.
“We’re having a very good year,” said Derick Lynch. “We’re doing a lot of tug and barge work, we’re doing some work for Kirby as well, and we’re booked a month and a half in advance, which is a long look ahead for us. We’re working with all of the major players, from Vane, to Kirby to McAllister to Wilmington Towing.”
Serving as the tug and barge repair facility in the Port of Baltimore, its experience with the maintenance and repairs of tugboats and barges is extensive. General Ship Repair operates its own floating equipment, trucks and portable equipment, and is able to service a vessel during cargo operations, at anchorage or at its own facility. Central to its success today is its pair of 1000-ton floating drydocks, the second added in 2012 replacing a smaller 350-ton unit. The addition of the second 1000-ton unit was truly the key toward making the yard more efficient, according to Derick Lynch.
“We were always struggling with that one-horse town drydock,” putting one boat up there and having the various work crews doing what was needed one step at a time, he said. “It’s so much more efficient having both drydocks.”
Another big investment was in the yard’s water blasting system, replacing the more labor intensive but cheaper sand blasting. “We’re not sandblasting anymore,” said Derick Lynch. “Even though the UHP (water blasting system) is more expensive to use and maintain, in the long run it is much cleaner and it helps us in productivity as it eliminates sand getting into every crack and crevice.”
While the company has a long history of investing in facilities and equipment to ensure it meets vessel fix needs, Derick Lynch maintains that investment in its people is central to its long-term (and continued) success. “We put money back into the yard when we can put it back. At the end of the year the first priority is giving back to our employees in the form of bonuses, and setting aside some money for some major projects.” 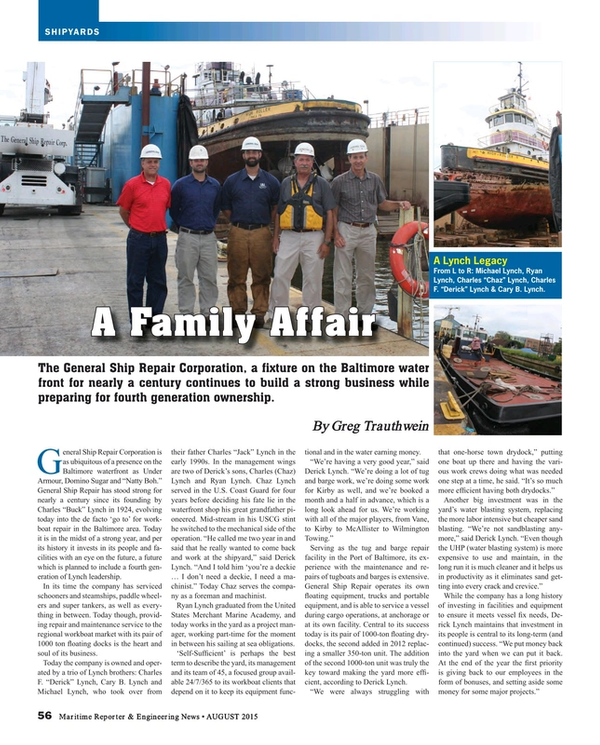