Maritime Surveillance: Autonomous and in Real-time

Conventional surveillance technologies cannot easily help to detect fast boats, which generally have small radar signatures and do not carry automatic identification systems (AIS). For this reason, the NATO STO CMRE (Center for Maritime Research and Experimentation) has addressed this problem along with other project partners, as part of the European project PERSEUS.

The PERSEUS project (Protection of European BoRders and Seas through the IntElligent Use of Surveillance), coordinated by Spanish technological company Indra, is one of the most significant initiatives within the 7th Framework Program of the European Commission, and has constituted the flagship of R&D in the maritime security segment.

In the project’s term, ended in June 2015, CMRE scientists and engineers worked to design, develop and demonstrate at sea concepts of continuous, real-time passive underwater acoustic systems for maritime surveillance. The objectives have been successfully met by using innovative solutions integrated on board unmanned mobile platforms, i.e. both on an underwater glider (an autonomous underwater vehicle which uses shifts in mass to steer and changes in buoyancy to dive and surface) and a Wave Glider (an autonomous vehicle with a surface float and a submerged glider, generating forward movement by exploiting sea wave energy). 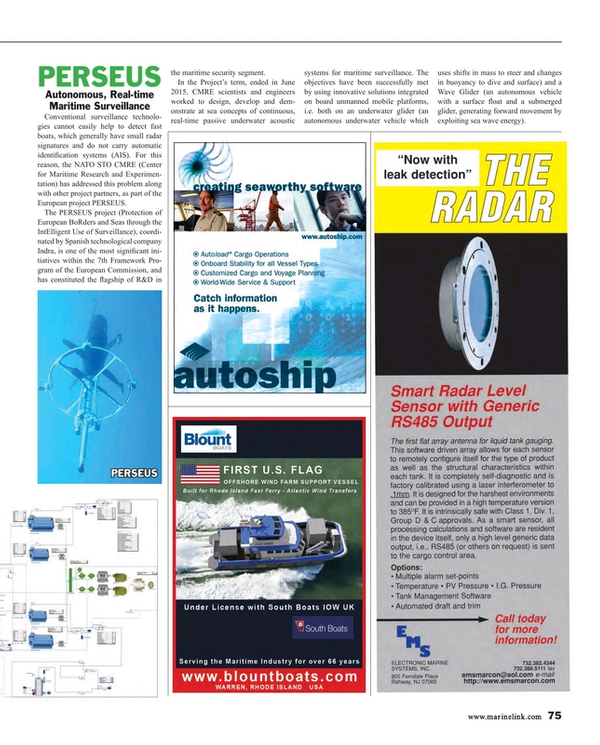