The Lowdown on Ocean Acidification

Scientists say that the world’s oceans are acidifying.  This term is correct, but somewhat misleading.  Until recently, the oceans have had (so far as can be determined) a pH level of about 8.4 for millennia.  A pH of 7.0 is neutral.  Thus, the oceans are alkaline, not acidific.  But, since the beginning of the industrial age when emissions of carbon dioxide started to rise, the oceans’ pH level has dropped to 8.3 and the waters have become less alkaline.  Some argue that that is not a big change in 200 years.  But it is the largest change known to have occurred in 20 million years.  In addition, most of that change has occurred during the past 50 years and the rate of change is accelerating, keeping pace with the increase in carbon dioxide emissions.  It has been estimated that the average pH of the oceans will fall to 7.8 by the end of the 21st century if the carbon dioxide emissions trend continues.
Why do we care?  We don’t live in the ocean and we don’t drink seawater.
We care because there is only one Earth and one biosphere.  Oceans cover about 70 percent of the Earth’s surface and constitute more than 90 percent of the biosphere (that portion of the Earth capable of supporting life).  Many chemical reactions, including those essential to life, are sensitive to even small changes in the pH level.  A small change in the pH of seawater can have harmful effects on marine life, impacting chemical communication, reproduction and growth.
Ocean carbonate chemistry is a natural buffering system, but this buffering capacity is being compromised as a direct result of carbon dioxide absorption by the oceans.  The dissolved forms of carbon dioxide – carbonic acid, bicarbonate and carbonate – have a significant impact on seawater pH levels because their concentrations are rapidly absorbed and distributed compared to other seawater constituents.
As the oceans uptake the increased amounts of carbon dioxide from the atmosphere, a portion converts into carbonic acid, thereby reducing the alkaline level of the water.  Higher acidity of the oceans can reduce the ability of some marine species to mature and form shells and it can alter their physiology or behavior, affecting growth, fertilization, embryonic/larval development, and survival.  It impacts marine ecosystems by such means as disrupting predator and prey relationships in food chains and altering habitats, including by degrading barrier reefs that protect coastal areas.  Over time, lowering of pH levels can damage local economies by disrupting fishing and tourism.
Higher levels of carbon dioxide in seawater cause chemical reactions that reduce the saturation state of calcium carbonate minerals such as aragonite and calcite.  Many marine organisms, including oysters, clams, starfish, and zooplankton, as well as some plants and algae, construct their shells and other structures from these minerals.  As the saturation state approaches, these minerals are leached out of the shells and other structures, having potentially fatal consequences.  Even if the organism survives, it must devote more energy to shell/structure grow and maintenance, leaving less energy available for reproduction and other activities.  Disrupting the calcium carbonate cycle not only impacts these animals, it has adverse effects on the entire marine ecosystem.
The pH level of the blood in marine animals is lower than the pH level of the seawater.  Ocean acidification reduces the difference between those two pH levels, with adverse consequences.  Respiratory proteins in the blood, such as hemoglobin, bind oxygen at high pH and release oxygen at low pH.  This allows oxygen uptake at the gills or similar structures and oxygen release at the cells, where metabolically-produced carbon dioxide has decreased the pH.  If the pH levels at the gills and at the cells are similar, a condition called respiratory acidosis results and death can occur.
Most, but not all, marine plants and algae will probably suffer few adverse consequences from a moderate lowering of the pH level of seawater, but further research is required.  What is known is that ocean acidification reduces biodiversity, ultimately causing adverse impacts throughout the biome.
In 2009, Congress adopted the Federal Ocean Acidification Monitoring and Research Act (FOAMRA).  This statute established an ocean acidification program within the National Oceanic and Atmospheric Administration (NOAA) and directed comprehensive research on the processes and consequences of ocean acidification on marine organisms and ecosystems.  As the statute’s name indicates, it only authorizes increased and coordinated monitoring and research relating to ocean acidification.  Active measures to reduce or ameliorate ocean acidification must be undertaken under separate preexisting or subsequently adopted statutory authority.
The problems posed by ocean acidification are not local or even regional.  They are worldwide.  Halting or reversing this process requires global action, principally involving the reduction of carbon dioxide emissions.  Needless to say, this will be a heavy lift. 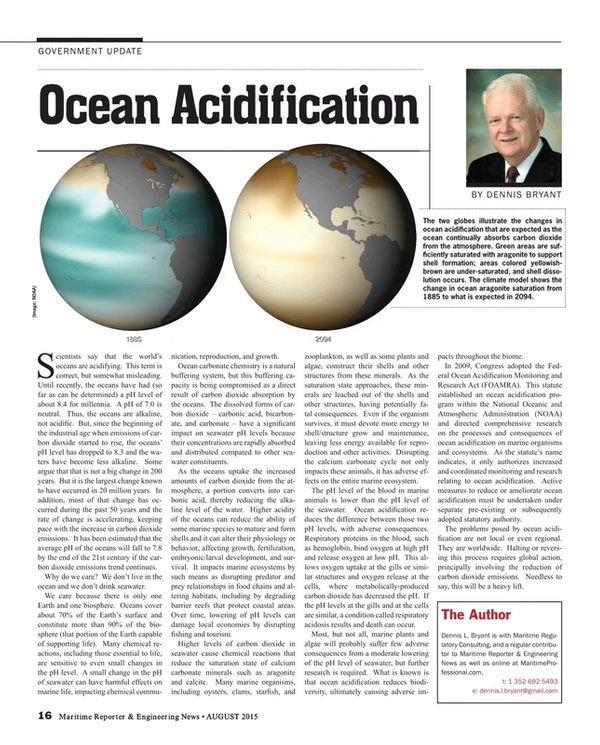 Read The Lowdown on Ocean Acidification in Pdf, Flash or Html5 edition of August 2015 Maritime Reporter