General Dynamics NASSCO has invested several hundred million in capital projects as part of its efforts to increase efficiencies via  modular shipbuilding, including: two 300-ton cranes allowing shipbuilders the ability to increase the size of the erectable blocks; a block assembly line to optimize construction of commercial ship blocks; inverted block and grand block outfit areas to more fully install components and equipment on blocks; and a state-of the-art, environmentally-friendly blast and paint facility to paint blocks indoors with high capacity equipment. .
General Dynamics NASSCO is also committed to environmental stewardship.
The company recently unveiled one of the largest controlled lighting systems for a manufacturing site at its shipyard in San Diego, California.
Designed specifically for industrial use, the new $630,000 state-of-the-art system is part of a three-phase lighting enhancement project that will significantly reduce energy consumption. Energy reduction reduces NASSCO’s carbon footprint and improves sustainability.  By switching to controlled lighting, the company is projected to save more than 1.3 million kilowatt hours (kWh), per year.
Additionally, a commitment to training and workforce development for employees and new hires is embedded in the company’s culture. General Dynamics NASSCO offers year-round employee and supervisor professional development programs and extensive training. Since last year, more than 580 shipfitters, welders, outside machinists, and others have completed new hire training and joined the workforce.
The company is committed to continuous improvement to reduce the cost of shipbuilding, resulting, in part, to the largest backlog in NASSCO’s history. NASSCO is competing for several new government and commercial shipbuilding opportunities including the Navy’s T-AO(X), LHA-8 and LX(R) programs.
NASSCO’s extensive repair operation spans both coasts, including 16 different locations in four major U.S. Navy ports. In 2013, the repair operation made substantial capital investments to its pipe shop facility to allow for much needed space and crucial crane services. The upgrades allowed repair employees the opportunity to work safer, and more efficiently.

Recent Deliveries
In the second quarter of 2015, General Dynamics NASSCO delivered the USNS Lewis B. Puller. The ship is named in honor of the late U.S. Marine Corps Lieutenant General Lewis “Chesty” Puller, the most decorated Marine and the only one to be awarded five Navy Crosses. NASSCO shipbuilders began construction on the ship in 2013.
The mobile landing platform, configured as an afloat forward staging base, is the first of its kind. Designed exclusively by NASSCO, elements of the ship include a 52,000 square-foot flight deck, berthing, fuel storage, equipment storage, repair spaces, and accommodations for up to 250 personnel.
The ship is capable of supporting multiple missions including Air Mine Counter Measures (AMCM), counter-piracy operations, maritime security operations, humanitarian aid and disaster relief missions and Marine Corps crisis response. The ship is designed to support MH-53 and MH-60 helicopters, and will be upgraded to support MV-22 tilt rotor aircraft.
The U.S. Navy awarded General Dynamics NASSCO a contract for the detail design and construction of a fourth mobile landing platform, to be configured as an afloat forward staging base. Construction is scheduled to begin in the fourth quarter of 2015.
In the past decade, NASSCO has delivered 16 ships to the U.S. Navy.
In the fourth quarter of 2015, General Dynamics NASSCO will deliver the world’s first LNG-powered containership. Built for TOTE Maritime, the 764-foot long Marlin Class containership will be the largest ship powered by LNG, in the world.
The Marlin-Class containership reduces particulate and gaseous emissions by more than 98 percent, making these ships the greenest ships of their kind anywhere in the world.
NASSCO has delivered 11 commercial ships in the past decade, and currently has ten commercial ships under contract, including two Marlin Class containerships for TOTE. 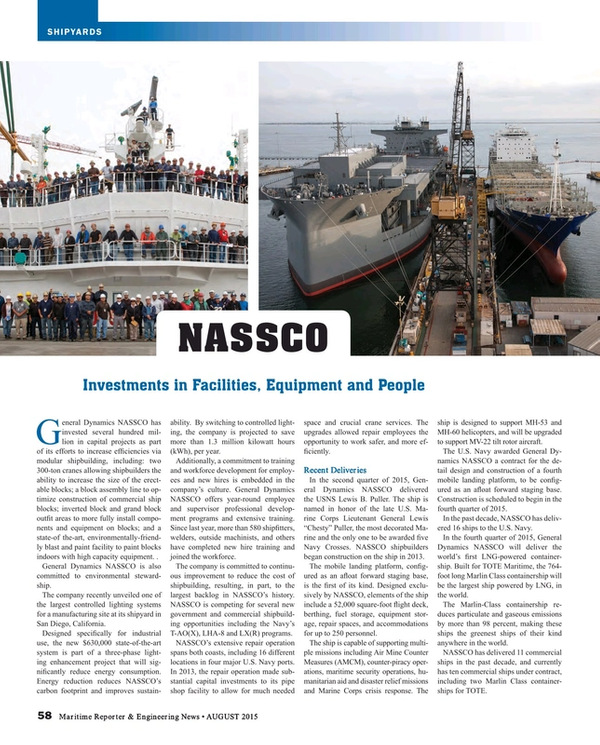