Oman Drydock Company (ODC) is growing fast. In January, the yard hit an important milestone - its 300th drydocking. Harnessing the power of its new $1.8 billion, 1.3 million sq. m. shipyard it aims to become a leading shipyard in the Gulf over the next five years. A key selling point for ODC is its geographical position.  ODC is in poll-position for the Asia – Europe shipping routes and critically, saving ship owners time, and potential disruption, as ships can come straight to us without deviating through the Strait of Hormuz.
In terms of investment, ODC plans to spend around $80 million this year. As a result of the falling crude oil price, ODC is concentrating effort on conversion projects as demand for carrying and storing crude increases.  It recently began two massive new OBO to VLCC conversions for the Greek owned Springfield Shipping Company.  These follow the successful multimillion dollar OBO to VLCC conversion of the Olympic Luck it undertook for Springfield in January. The two new vessels Olympic Leopard and Olympic Lion are due to complete in the autumn.  In addition to conversion contracts, ODC will carry out repairs on a royal yacht and several navy ships. Moreover, it has many repair works pre-booked for the second half of 2015, allowing ODC to achieve its revenue target which has doubled since 2014.

Dr. Al Abri  Takes the Helm
ODC has a new Deputy CEO in Dr. Ahmed Al Abri, one of Oman’s most experienced maritime professionals. Dr. Al Abri, draws on 17 years experience working as a naval architect overseeing major projects in shipyards around the world.  “It is fantastic to have the opportunity to put years of experience into practice here at the main shipyard in Oman,” he said. “We are tackling big issues that have slowed operations in the past such as visa and customs bureaucracy as well as complex environmental obstacles. In addition, we are expanding our supply chain building strong alliances with a broad cross section of companies including welders, painters, blasters and engine suppliers. Moreover, we are improving the truck, rail and logistics access to Duqm.  All these factors make us much more desirable to customers who want to ride a commercial wave and see real passion, real commitment and real hunger from a new keen shipyard that wants to impress by delivering the best service.” 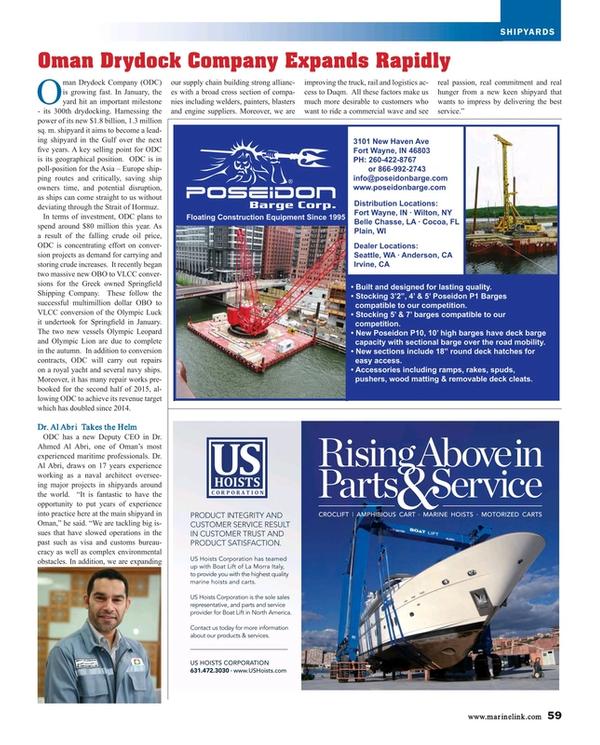