Up to May 2015, ASRY (Arab Shipbuilding & Repair Yard), was seeing encouraging results from it’s 2015 strategy to combat the widespread challenges facing the maritime repair market, particularly shipowners reduced repair budgets. In terms of revenue, the ship repair side of ASRY’s business has been solid in 2015, with almost identical revenues to the same period in 2014, with the number of ships showing a slight increase for the same period last year. Up until the end of April, 65 ships were repaired at ASRY, showing evidence that the commercial team have been able to compensate for lower budgets with larger number of projects. These projects are split between the Arab markets and International markets in similar proportions to ASRY’s usual client mix, with the Arab market being slightly dominant.
This solid performance has included a variety of noteworthy projects in H1 that includes two of Kuwait Oil Tanker Company’s tankers – Wafrah and Al Jabriyah II – docking as part of the exclusive fleet agreement signed in early 2015 which will see almost its entire tanker fleet dock at ASRY in the next two years. Another interesting project was the Rimthan II, an OSV from Saudi Aramco, which had a new installation of a 75-tonne Liebherr deck crane, including all engineering calculations, design analysis, inclining experiment upon completion to verify vessel reliability and reissue of new stability booklet. All this work was carried out in-house by the ASRY New Construction & Engineering Division, which has been growing its engineering portfolio throughout 2015. A third interesting repair was a widening of a Derrick pipe-laying barge from 31.7 to 40.3 m, by adding sponsons on the port and starboard side. The whole project – again completed entirely in-house – was completed in a 45-day time window, by pre-fabricating the sponsons before the vessel arrived.

Project Jupiter
A probable cause for ASRY’s ability to weather the ship repair market conditions is Project Jupiter - ASRY’s initiative to build the leading cluster of specialist services in the Arabian Gulf. The project has been gaining regional praise for its approach to yard-contractor partnerships and made another important addition recently, this time with the signing of a specialized Services Agreement with Relay Engineering Limited, the specialist engineering company based in the UK, to offer its expertise in electrical, mechanical and constructive engineering directly to ASRY’s customers from a dedicated service point in the yard.
With Relay Engineering, the number of onsite specialist subcontractors now numbers 35, with more due in 2015, making ASRY the most convenient hub for maritime repairs.

Adding Newbuild Capacity
Diversification is another of ASRY’s strategies that is paying dividends, with the important new move by the  yard to kickstart its newbuilding program. The New Construction & Engineering division recently signed a $2.8m agreement with the Bahrain Coast Guard to design and construct a new Landing Craft for the transport of vehicles, potable water and fuel.
The craft, potentially the first of two, will be delivered in 2016 and will be approximately 34.5m in overall length, with two 600 hp engines, having a top speed of 10 knots and cargo deck capacity of 40 tons. ASRY created a New Construction & Engineering Division in 2014, which has increasingly been developing its portfolio of engineering packages, and now signed this first newbuild deal. ASRY already has past experience in the new construction sector having built a fleet of four ASD tugs, power barge hulls, and a 35m Offshore Support Vessel for Kuwait Oil Tanker Company.
The New Construction & engineering division is able to attract these kind of newbuild projects due to its advanced engineering capabilities such as its FARO 3D scanner, a team of hand-picked experts, and decades worth of combined engineering expertise.


(As published in the August 2015 edition of Maritime Reporter & Engineering News - http://magazines.marinelink.com/Magazines/MaritimeReporter) 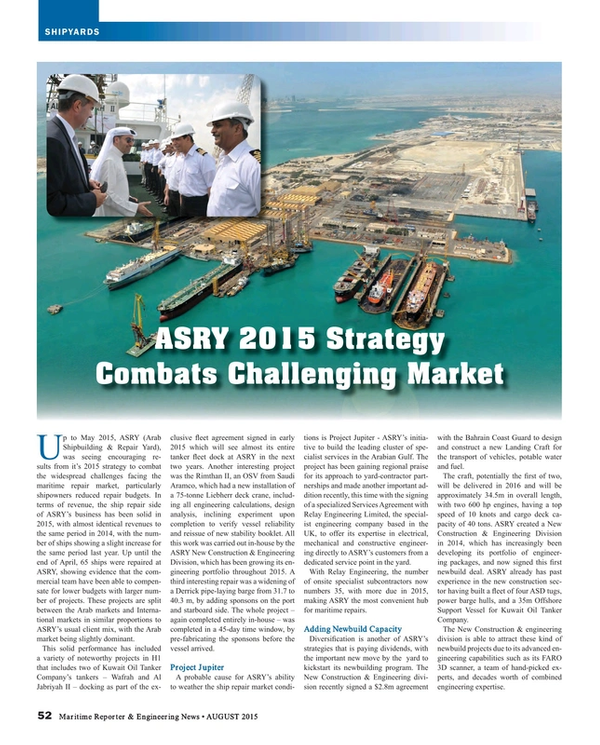