A pair of market entries — one a business of powerful Japanese technology players, the other a newbie with some pedigree — reveal how bold, modular design could pay dividends in a competitive market. Their increments of innovation add up to timely ways to comply with changes, including extra U.S. Coast Guard strictures due out on the eve of an International Maritime Organization meeting in November 2015. The record numbers of vendors at Norway’s Nor-Shipping show offer paths to compliance, as countries add rules or ratify IMO Section B edicts aimed at stifling foreign species incursions by ballast water.
The IMO’s mandatory Section B ballast water strictures come into force for all vessels on Jan. 1st, 2016, but that’s not why we slide ourselves into a seat at Ecomarine’s booth and absorb a video on how the company’s filter-first, UV and electrolysis neutralizing technology kills stowaway sea life.
Through the presentation we come to understand that Nor-Shipping is Ecomarine’s first foray into a sizeable market of Norwegian owners and operators. We ask how their technology compares to that of dominant Norwegian player, Optimarin, and a sales representative says, “The same.” We take it he means “also an ultraviolet-light system” for killing invasive organisms in ballast water. The trademark Ecomarine is a brand and joint venture of Hitachi Zosen and Sumitomo Electric, so its presence is significant at Nor-Shipping. Optimarin dominates Norway market share via sales to offshore service vessels with ballast pump capacities of from 80 cubic meters per hour to 250 m3ph (and other vessels up to 2,000 m3ph). So, Ecomarine is competitive with its “IMO and AMS approved” UV system for up to 600 m3ph. Its 600 m3ph Electrolysis system is understood to be waiting for “type approval” later in 2015, around the time the IMO meets.
The dates are a reminder of what Optimarin CEO Tore Andersen once told this writer: “No one is type-approved,” a shake of the head at ongoing class and country changes for ballast systems that seek to eradicate some 200 plankton and bacteria measured by the C.M.F.D.A and USCG.
“It seems no one has been able to meet (total eradication levels),” Andersen said.

Modular magic
Unlike metal mesh systems, the Ecomarine system starts by circulating ballast water through a “non-woven” filter system that feels like a strong, papery fabric in the hand. An image of the filtered water at 50 micrometers appears to show no sign of zoo- or phytoplankton.
By January 2016, ships have to manage the aquatic life in that water to the strict standard described in the IMO’s rule No. D-2. Retrofits and new-builds offer a steady flow of business for shipyards, but once installed, ballast water system vendors promise minimal maintenance.
As we watch the Ecomarine man remove the filter cartridges (sections, really) from the one-third-scale Sumitomo Electric RC filter, we realize the system is tiny yet robust, light and easily installed and maintained. It could spell cost-savings. The sight of these “portable” systems at the world’s shipping fairs might be one reason India recently lost its fear of retrofits for older vessels and ratified Section B of the Ballast Water Convention.

Satellite treatment
As we walk around, it’s clear not all filter systems are created equal. Some percolate. Some boil. Some poison. Some zap. One newcomer to the Norwegian show uses satellite communication to relay to and pinpoint for owners, operators and port authorities which vessels need ballast treatment or treatment help ahead of entering port.
KraftPowercon offers portable power for electrostatic ballast systems, where a small portion of ballast water is sent to an electrolysis cell to generate sodium hypochlorite. In these systems, that portion of water is mixed with seawater and sent to the ballast tank during ballasting or to a neutralizer to lower sodium hypochlorite concentrations during de-ballasting.
“The consumption of power has been the problem in the end,” echo Mr. Andersen’s words. When we last spoke, Optimarine was waiting for type approval of a cable intended to make the installation and powering of its system easier.
One of KraftPowercon’s cards in the Ballast Water Championships are its references, which include coast guard vessels and navy submarines. And like Ecomarine’s filters, its rectifiers are modular and small.
Like Ecomarine, KraftPowercon appears to be venturing into a new market: any vessel using an electrolysis system, especially those waiting to enter Shanghai harbor. KrafPowercon produces its solution in Sweden, India and China, yet the ace up KraftPowercon’s sleave is a satellite signal from its kit that tells its service people and clients when a section needs to be lifted out and changed, a process any crew can do without special training.

Tense market
All this is sweet news for fleet owners contemplating compliance and its costs ahead of “enforcement” in January 2016. Rules extras the Coast Guard appears to be compiling seem to add even more insecurity.
“The IMO would mean fewer acronyms,” Andersen said. “The USCG might recognize that the IMO is the only way to go. Why wait while we pollute as much as we can.”
Yet, it is understood DNV GL, the German-Norwegian class society, has been contributing to the USCG’s growing list of ballast water rules. In an interview with Maritime Reporter on the central stage of a Nor-Shipping conference, Commandant of the USCG Admiral Paul Zukunft tells us even stricter standards are sought on ballast water and securing consensus and compliance “is one of the biggest challenges right now.”
“Many states in the U.S., for example, want very stringent standards where the technology doesn’t exist. So, we’re also promoting the advancement of technology through the use of independent labs that validate (new) systems for worldwide use, not just for domestic use in the United States. It’s very global. It’s very collaborative.”
Asked when ballast-water strictures might become universal, he says the USCG can only work with its four independent labs to validate technology.
“We’re working with four independent labs right now to validate (technology) submittals. There are three submittals right now in the final stage. Eight others are in the initial stage of review. I’m pretty optimistic we will have Coast Guard approved ballast water standards by the IMO conference in November.” 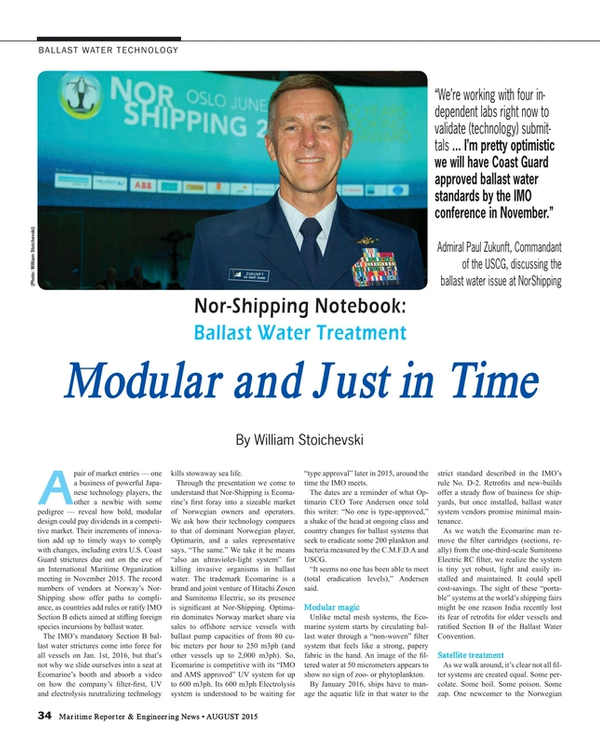