Ballast Water Tech Business Gearing for a Surge in ‘16

While the trek to see the ballast water technology market ‘really take off’ has stretched more than a decade longer than he anticipated, Ecochlor’s president Tom Perlich has maintained course and is ready to grow in rapid step with the market.

When Tom Perlich left Corporate America in 2001 to start Ecochlor, he left behind the security of a major corporation and all of its benefits, just one month after the birth of his fourth child. Why? He saw the vast potential of the global Ballast Water Technology (BWT) market, which at the time he assessed it would really take off in just six months.
“I missed that,” he deadpanned during a visit to his office earlier in the summer.
While Perlich may have been off in his timing, he shares a literal shipload of companions in this regard, as the BWT issue slowly but surely inches toward resolution both at the international and domestic U.S. level.
Perlich has made a career in water treatment technology, and he found out about the BWT issue about 15 years ago in a paper written about the Chesapeake Bay.
“We looked at the different technologies that people were exploring, and I simply didn’t think (that many of them) were going to work effectively. I was surprised to find that no one had looked at chlorine dioxide, which I felt was hands-down the best technology for two reasons: it is highly effective, and the chlorine dioxide by itself will decay quickly in water,” said Perlich.
“What you want for ballast water is something that is highly effective that will kill the most tenacious organisms under a wide variety of water conditions;  chlorine dioxide is perfect for that.”
So began a journey of nearly 14 years. Perlich was encouraged to see his first system sold within two years. To date eight Ecochlor systems are in ships and on the water with an additional 32 systems on order. He sees 2016, with the finalization of BWT rules and the begrudging acceptance by shipowners to accept the BWT reality, as the true turning point for his company and the industry as a whole.
“We have been seeing a lot of activity in the last six months, and I expect Q4 2015, in preparation for 2016 to be very busy. We’re starting to see shipowners begin to take this issue much more seriously than two years ago. The people on the shipowner side that are calling meetings are the senior decision makers who have done their research and are asking more targeted questions on ease of installation, long-term effectiveness as well as true life-cycle costs.”
Today, Ecochlor has the ability to build 150 to 180 systems per year, but is standardizing processes and procedures that will make it easy to ramp up production as needed,” Perlich contends. “I don’t see a bottleneck; it’s a simple system, with many standard components.”

The System
Ecochlor Ballast Water Treatment Systems use chlorine dioxide technology, which has been used in water treatment and industrial applications in over 50 countries world-wide for over 60 years.
“Chlorine dioxide is preferred over chlorine in dirty water applications, because chlorine will chlorinate organics and create chlorinated by-products,” said Perlich. “In many industries, chlorine is being replaced by technologies that don’t chlorinate, because it doesn’t chlorinate, it oxidizes.” Perlich said one of the advantages of the Ecochlor system lies in its flexibility. He has targeted the refit market as a prime one for the Ecochlor solution, and notes that the components that make up the system can be re-arranged liberally per ship type and size. The system, with the exception of the filters, can be placed almost anywhere on the vessel and can be custom designed to meet existing space limitations.
“Right now, we’re concentrating on the retrofit because the newbuild market has really slowed down,” Perlich said.
The Ecochlor® BWTS is a simple two-step process: A filtration stage (of all ballast water coming in) with a 40 micron self-cleaning filter.
Then a dose of chlorine dioxide is generated on demand with a set dosage as required for the measured ballast water flowrate.
When it comes to the Ecochlor solution, Perlich said the bigger the ship, the higher the ballast water flow, the better his system stacks up.
“The bigger the system the better,” said Perlich. “The system is easily scalable: it can handle 10x the ballast water flow, but the size of the physical unit may grow only 30%. With a lower ballast flow rate, we can’t make our system that much smaller and we can’t make it that much cheaper. But there are great advantages when we get on bigger ships, because the cost and the physical footprint do not get that much bigger.”
At the time of our meeting Perlich was preparing to personally relocate to Cyprus to open Ecochlor’s new Global Sales office and to be more present in  the well-established maritime center of both Cyprus and Greece.

A Lifetime Decision
“Shipowners need to be familiar with what they are buying, and what they are going to have to live with for the next 20 years. They don’t want to have to replace a BWTS because of more demanding procedures in the future. ”
To this end Perlich and his team are focused to make the replenishment of chemicals onboard the ship as seamless as possible. Each system is designed with an eye on replacing the chemicals every 6 to 12 months.
When a shipowner signs on with Ecochlor, it agrees to buy the chemicals from Ecochlor and will also work with personnel that are trained to safely complete the resupply with no ship crew involvement or need to evacuate the vessel. To make the cost predictable, Perlich said that the cost of the chemicals will stay exactly the same – except for a pre-agreed inflation escalator – for the life of the system.
“We try to make it as easy as possible for the shipowner on a cost basis, because they have to buy the chemicals from us. On a practical basis, we know where the vessels are and we know how much chemicals are onboard – the shipowner gives us the information to see where the ship is, how much it’s ballasting, etc. … which allows us to put additional chemicals onboard at their convenience.”
In reading tea leaves on the mercurial BWT market, Perlich sees more positives than negatives today. “You are starting to see a more knowledgeable customer base: ship owners are asking a lot of tough questions, and that excites me, because if they’re asking us, they’re asking everyone and it just gives us more opportunity to expand upon the real benefits on using the Ecochlor system on their vessel.” 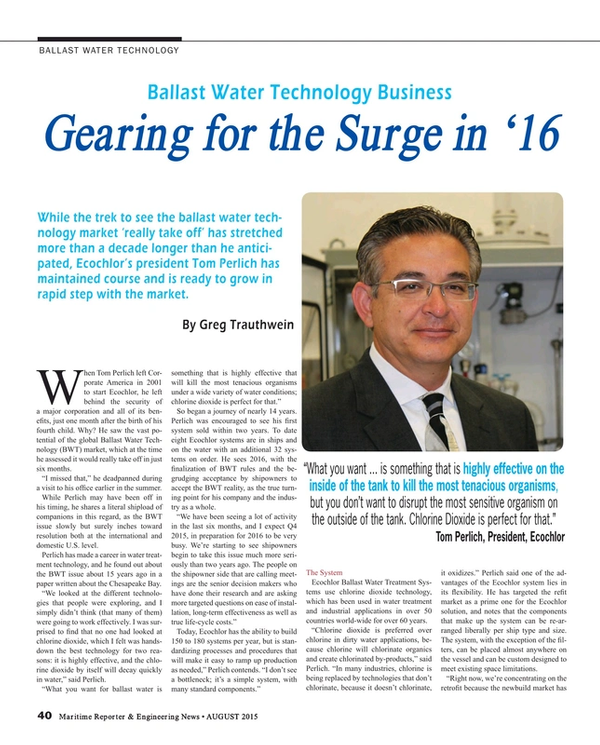 Read Ballast Water Tech Business Gearing for a Surge in ‘16 in Pdf, Flash or Html5 edition of August 2015 Maritime Reporter