The Care And Lubrication Of Marine Diesel Engines

New oceangoing ships in the American merchant marine fleet, now almost entirely steam driven, will likely be powered by diesel engines, according to experts at a marine technical symposium sponsored by Mobil Oil Corporation in New York. Shipowners were told of a recent study made for the U.S. government that shows diesels could save $300,000 to $600,000 a year per ship, mostly through reduced fuel consumption.

The two-day symposium, on the care and lubrication of marine diesel engines, was held at the St. Regis Hotel for more than 50 shipowners and their technical directors.

Jose Femenia, chairman of the Engineering Department at the State University of New York Maritime College, and guest speaker at the event, told the symposium that diesels are currently more economical for ships in the 10,000 to 25,000-horsepower range —the range in which most new ships are likely to be powered— and possibly up to 40,000 horsepower.

The higher ranges depend upon all of a ship's power and performance characteristics.

Mr. Femenia, who has completed several studies of marine powerplants for the U.S. Maritime Administration, pointed out that while ship designers for the past 30 years have been putting more power in engine rooms to speed up vessels on the open seas, this trend is not likely to continue.

"It's a well-known engineering principle that it takes eight times as much power—and eight times as much fuel—to double speed. When fuel cost about $2 a barrel, it made sense to put all the horsepower you could in an engine room to get a couple more knots from your propeller.

"In fact, many ships with large engines have slowed down to save fuel. Reducing power to about 60 percent of capacity in these ships slows the ship only a few knots but saves a great deal of fuel.

This reduction in power requirements will bring most new ships down to the 10,000 to 25,000- horsepower range where diesels work best.

"With today's fuel costs and ship operating conditions, diesel engines could provide more economical propulsion for all but the largest and fastest ships. However, total power requirements, including the need to heat oil tanks on a tanker, or for refrigeration on food-carrying vessels, or handling equipment on a containership, could change the fuel economics and make steam the better economic choice," he said.

The world's energy crisis has made marine powerplant design a very dynamic, fast-changing technology. Diesel designers are increasing engine operating pressures and temperatures. While this increases fuel efficiency substantially, it puts a greater burden on the thin film of oil between moving parts. Better lubricants and more reliable application are needed to match the fuel-saving designs of the engines." Besides the drive for greater fuel efficiency, a growing disparity between the demand for and cost of light, clean-burning fuels versus heavier fuel oils also put a greater burden on diesel engine lubricants, according to Mobil's fuel oil sales manager John Johannessen.

"Lighter fuels are in great demand by powerplants and other users in densely populated areas where a clean burning fuel is essential," he explained. "Heavy fuels, literally from the bottom of the crude oil barrel, sometimes cost less than the crude itself and certainly less than light products.

If shipowners can trust the lubricant to handle the undesirable components of heavier fuel—preventing sludge, deposits and wear —they can save a lot of money by burning the heavy stuff. In fact, the heavy residual fuels or "bunker" oil once used only for firing steam boilers is now increasingly used in diesel engines." Edward K. Arndt, manager of Mobil's U.S. marine sales and chairman of the meeting, said the company has sponsored similar symposiums in a dozen countries with large diesel-powered merchant fleets — including Greece, Norway, and the Soviet Union.

This is the first such symposium to be held in the United States.

The program included technical presentations by Mobil engineers and researchers on the care and testing of lubricants in use, analyses of samples of used oil to detect engine problems, trends in marine fuels, and a run-down of the lubrication requirements of various types of diesel engines.

Mobil is the world's leading supplier of lubricants for marine diesel engines. The company has facilities around the world for serving ships of all countries in most ports of call. 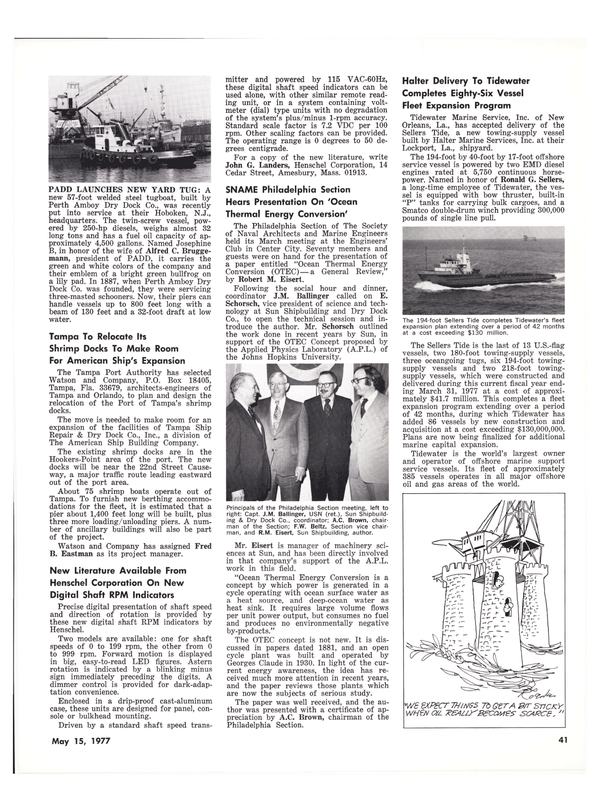 Read The Care And Lubrication Of Marine Diesel Engines in Pdf, Flash or Html5 edition of May 15, 1977 Maritime Reporter