Norfolk Shipbuilding and Drydock Corporation (Norshipco), Norfolk, Va., has announced two multimillion-dollar projects for the firm's Berkley plant: Norshipco has signed a contract in excess of 15 million dollars with the Brazilian shipyard Ishikawajima do Brasil-Estaleiros S.A. (Ishibras) for construction of a 58,000-ton steel floating drydock, to be among the largest and most modern in the world.

The floating drydock was designed by J.J. Henry Co., Inc., New York naval architects and marine engineers. Keel-laying for the drydock is scheduled for June 1977, and construction and outfitting will require approximately 15 months. Delivery to Norshipco is expected in late 1978. Towing the drydock from Ishibras's Rio de Janeiro shipyard will take about 45 days.

Roper 3rd said he expects the firm's annual sales, currently $54 million, to reach $100 million in the next 10 years, and to be $200 million within the next two decades, because of the new drydock.

"We recognized that with the larger ships entering Hampton Roads, and with those on the drawing boards and under construction, it was necessary for Norshipco to expand our facilities to remain competitive in the world market," he said.

Mr. Roper predicted that 45 to 60 additional ships each year will visit Norshipco to use the floating drydock. "The drydock will keep work from going elsewhere," he said.

The steel floating drydock will be 950 feet long, 160 feet between wingwalls and have a lifting capacity of 58,000 long tons. It will be among the largest and most modern in the world, and will be equipped with automatic sensing and deflection instrumentation to insure the ultimate in safe drydocking.

The drydock will have the latest automatic cleaning and painting equipment, assuring that high-quality work can be done very quickly. This equipment is designed to produce very little or no disturbance to the environment.

Norshipco currently has under construction a 1,030-foot-long concrete pier as part of the expansion of the Berkley plant. The new pier is being built by Tidewater Construction Corporation at a cost of approximately $5 million, and is scheduled for completion in June of this year.

The drydock will be moored adjacent to the new pier and parallel to the channel of the Southern Branch of the Elizabeth River, allowing ships up to 1,200 feet long with a beam of up to 160 feet to enter the drydock directly without turning.

Norshipco expects the project to expand the yard's payroll extensively.

"We look for our payroll, currently 2,200, to increase by 300 to 400 employees initially, and to exceed 4,000 persons by 1981," Mr. Roper said. Norshipco is currently the largest nongovernmental employer in South Hampton Roads.

According to Mr. Roper, the expansion of Norshipco's Berkley plant has been in active planning since 1970. "The contract with El Paso gave us the impetus to activate the drydock phase of our overall expansion plan. The impact of both our contract with El Paso and our expanded facilities should be significant in the City of Norfolk and in our neighboring cities, as well as in the Commonwealth of Virginia," he said.

The El Paso Marine ships will be used to carry LNG from Arzew, Algeria to terminals in Cove Point, Md., and Savannah, Ga. Norshipco anticipates that starting in the spring of 1979 each of the nine ships will be in the Berkley yard for annual repairs. 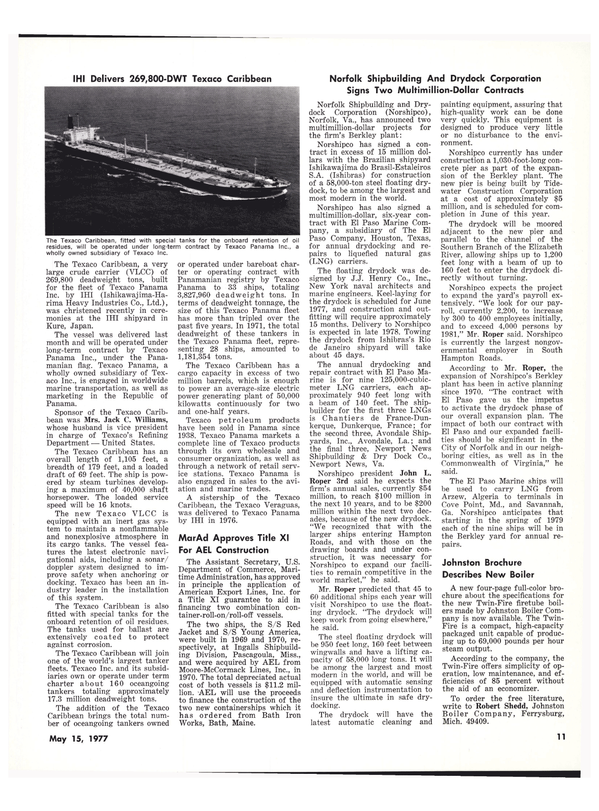