The Philadelphia Section of The Society of Naval Architects and Marine Engineers held its March meeting at the Engineers' Club in Center City. Seventy members and guests were on hand for the presentation of a paper entitled "Ocean Thermal Energy Conversion (OTEC) — a General Review," by Robert M. Eisert.

Schorsch, vice president of science and technology at Sun Shipbuilding and Dry Dock Co., to open the technical session and introduce the author. Mr. Schorsch outlined the work done in recent years by Sun, in support of the OTEC Concept proposed by the Applied Physics Laboratory (A.P.L.) of the Johns Hopkins University.

Mr. Eisert is manager of machinery sciences at Sun, and has been directly involved in that company's support of the A.P.L.

work in this field.

"Ocean Thermal Energy Conversion is a concept by which power is generated in a cycle operating with ocean surface water as a heat source, and deep-ocean water as heat sink. It requires large volume flows per unit power output, but consumes no fuel and produces no environmentally negative by-products." The OTEC concept is not new. It is discussed in papers dated 1881, and an open cycle plant was built and operated by Georges Claude in 1930. In light of the current energy awareness, the idea has received much more attention in recent years, and the paper reviews those plants which are now the subjects of serious study.

The paper was well received, and the author was presented with a certificate of appreciation by A.C. Brown, chairman of the Philadelphia Section. 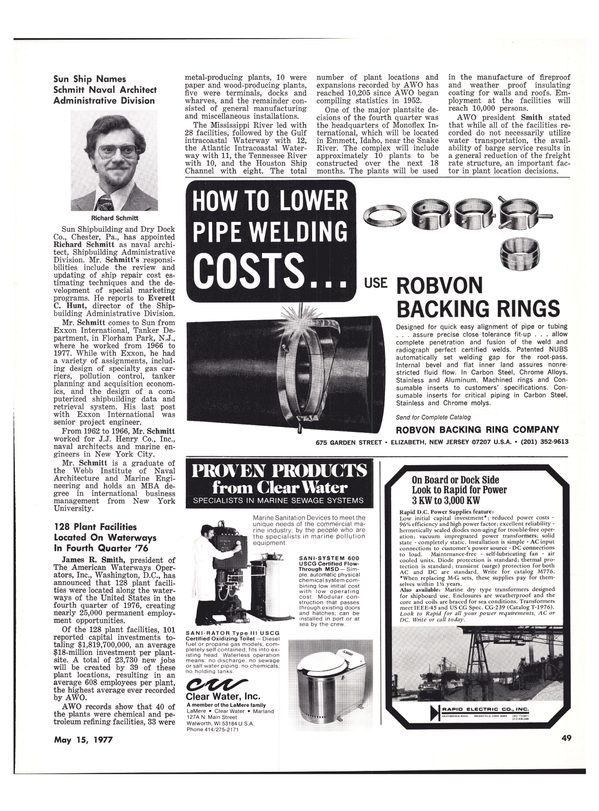