Besides requiring a highly effective oil recovery unit, Gulf also required a ship to patrol the waters near Whiddy Island, where the terminal is located, and periodically to patrol the full length of Bantry Bay, a round trip of about 50 miles.

The vessel, christened the Bay Skimmer, is a fully equipped, 68-foot, 100-ton ship designed to patrol at speeds up to 9 knots and to recover oil up to 3 knots.

The vessel, custom built for Gulf Oil use, is the prototype of a deepwater class of oil cleanup vessels that use a skimmer principal developed by JBF Scientific Corporation in Wilmington, Mass.

Built by Blount Marine Corporation, Warren, R.I., the Bay Skimmer was designed by Ralph A. Bianchi, president of JBF Scientific Corporation. Mr. Bianchi has designs for skimmer vessels up to 160 feet in length, and he believes that a skimmer that large could effectively clean up an Argo Merchant spill.

Because there are no drydocking or heavy-lift facilities within a convenient distance of the terminal, the hull of the vessel was designed so that it may be beached in the event that repair or maintenance work must be done below the waterline.

The Bay Skimmer utilizes the Dynamic Inclined Plane (DIP) Recovery System, collecting oil by forcing it under the surface of the water. Oil follows the surface of the moving inclined plane to a collection well underneath the unit. Buoyant forces cause the oil to naturally separate in the well, where it forms a deep oil pocket. Water-free oil is pumped from the top of the well to storage.

A double-chined displacement hull, powered with a twin propulsion system, provides high cruising speeds and excellent seakeeping characteristics. The bow is arranged to be opened during oil recovery operations and closed while transiting or operating as a workboat and supply vessel.

The first of this class vessel was launched in January of 1977. 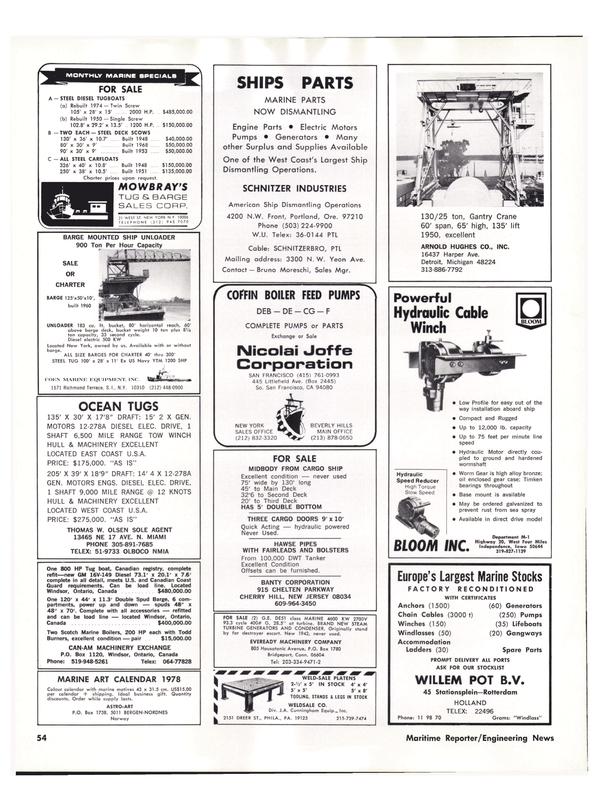