The direct-injection 3412 DITA version is said to offer some 8-10 percent increased fuel efficiency compared with the precombustion chamber 3412 model.

Higher torque rise, greater operating range, and reduced heat rejection are also features of this new configuration. Approved ratings include 520 bhp (388 kw) continuous and 625 bhp (466 kw) medium-duty commercial at 1,800 rpm. The matched Cat 7221 and 7231 marine transmissions are offered for the continuous rating, with the 7231 offered for the medium-duty commercial rating.

The second improved model announced by Caterpillar is the turbocharged 3208 T diesel, which is replacing the c u r r e n t v e r s i on 3208. Significant component improvements are said to be engineered into the compact, lightweight V8 diesel to extend its application to all levels of commercial propulsion service. Ratings for the 3208 T include 260 bhp at 2,800 rpm for light-duty commercial, 230 bhp at 2,400 rpm for medium-duty commercial, and 200 bhp at 2,400 rpm continuous.

Cat says the 3208 T provides the best power-to-weight ratio and largest displacement of any engine in its horsepower range.

The weight of the engine and Twin Disc MG507 transmission is only 2,320 pounds. Displacement of the compact, 90-degree, V8 f o u r - c y c l e diesel is 636 cubic inches (9.4 liters). The engine is equipped with a rear-mounted, water-cooled turbocharger with single exhaust outlet. Physical dimensions and connection points are the same as the current turbocharged 3208. 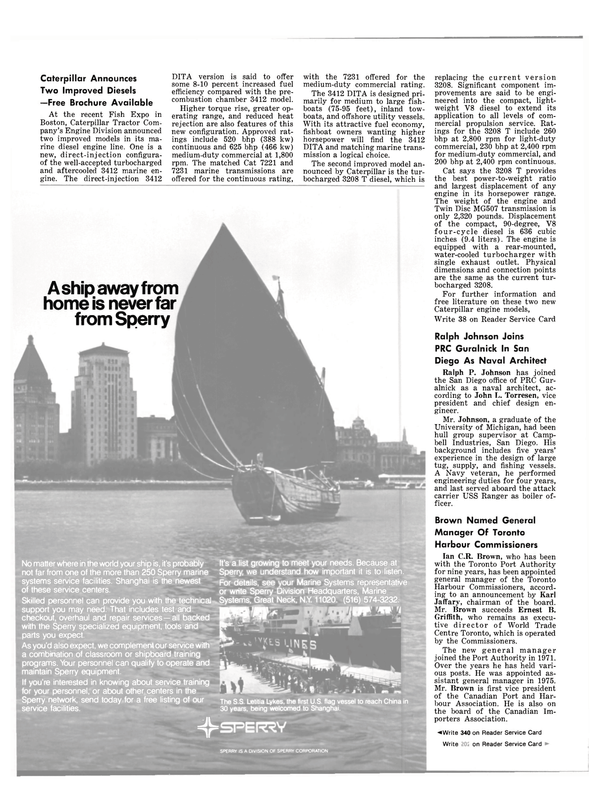