Steven Moodie To Retire As President And Director Of Interocean Shipping

The retirement, effective January 31, 1981, of Steven M. Moodie as president and director of Interocean Shipping Company and its subsidiaries, Venoil and Venpet, Inc., and Steamship Service Corporation has been announced by Thomas T. Church, vice president, Bethlehem Steel Corporation, transportation. The companies are wholly owned subsidiaries of Bethlehem Steel.

Mr. Moodie, who has also served as vice president of Bethlehem Steel's Marine Division and Great Lakes Steamship Division, is concluding 38 years of service with Bethlehem. He was graduated from the New York State Maritime College in 1942. He joined Calmar Steamship Corporation, a former subsidiary of Bethlehem, that year as a third mate and sailed on various Calmar vessels during World War II.

After the war, he sailed on ore carriers of the Ore Steamship Corporation, and in 1947 became master of the S/S Bethore. In 1951, he became port captain in the New York office of Bethlehem's steamship companies. In 1954, Mr. Moodie was promoted to marine superintendent and assumed responsibility for all shoreside operations of the deck department.

He has since served in various capacities in marine operations at Sparrows Point, Md., and New York. He was named manager of the Great Lakes Steamship Division with offices in Cleveland in 1968, and was appointed assistant v i c e p r e s i d e n t of the Water Transportation Subsidiary Companies in 1972. Mr. Moodie was elected president and director of the various steamship companies in 1975, and has been responsible since then for Bethlehem Steel's water transportation operations. 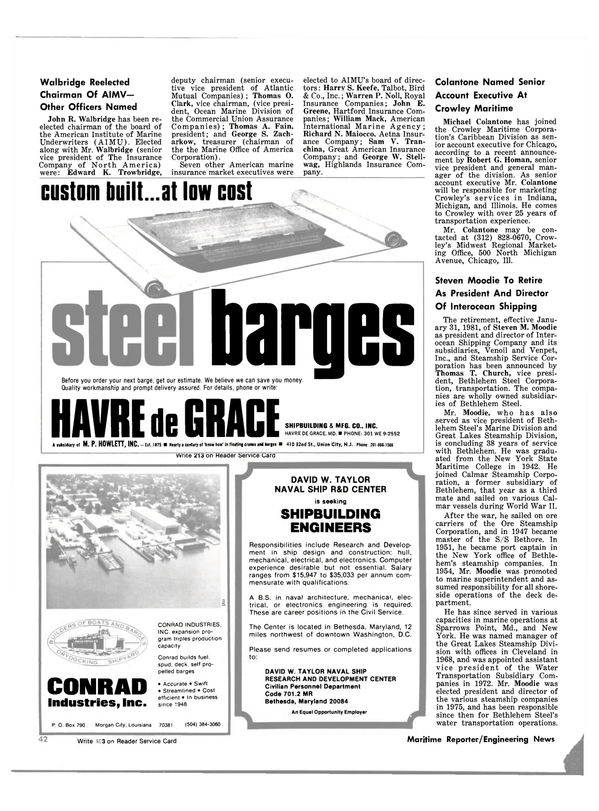 Read Steven Moodie To Retire As President And Director Of Interocean Shipping in Pdf, Flash or Html5 edition of January 1981 Maritime Reporter