A Survey Of 13 U.S. Shipyards And 16 Foreign Shipyards Identifies 16 Areas Where U.S. Shipyards Lag Behind Their Foreign Counterparts At the end of World War II, the United States had the largest and most productive shipbuilding industry in the world. During the past 30 years this country's shipbuilding industry has contracted to a fraction of its former size and has only in recent years made substantial investments in new facilities. On the other hand, foreign shipbuilders, notably the Japanese, have invested billions of dollars since WWII in new facilities and can now produce mer- chant ships in a much shorter time and with substantially fewer manhours than are required in the United States.

In an effort to improve the productivity of the U.S. shipbuilding industry the Maritime Administration (MarAcl) initiated the National Shipbuilding Research Program, which since 1971 has sponsored and jointly funded research and development (R&D) projects with a view toward improving the competitiveness of the industry.

However, there has not been a uniform evaluation of the technology being applied to all phases of shipbuilding with a view toward i d e n t i f y i n g industry-wide needs. The R&D programs to date have usually dealt with development of specific equipments and procedures where deficiencies have tended to be apparent.

In 1975 the British Government conducted a technology survey of all U.K. shipyards in connection with the nationalization of the industry. After seeing the procedure used, Mar Ad concluded that a similar survey of major U.S. shipyards would be useful.

In May 1978 MarAd contracted for an assessment of the level of technology now being employed by major U.S. shipyards, as compared with the best comparable foreign shipyards. The procedure used to make this assessment was the same as that used in the United Kingdom.

This report identifies U.S. ship construction operations and procedures that are lagging behind their foreign counterparts. It is hoped that this survey will provide guidance in two ways: 1. Encourage individual shipyards to examine in depth areas where they are using low-level technology, and 2. Serve as a baseline to the Government for determining what shipyard improvement programs it should support.

In considering the results of the survey, there are two important caveats: First, shipyard productivity depends upon a combination of many factors. The facilities, tools and procedures covered in this survey are most important, but they are only as good as the people who manage and operate them. This survey does not measure management, motivation or effort.

Second, this survey identifies only the levels of technology being used. The decision by a ship- yard to use more advanced technology would depend upon an economic feasibility analysis that takes into account the market and the characteristics of the individual shipyard.

The system for evaluating shipbuilding technology was first used in an extensive study prepared for the British Government. The purpose of the U.K. study was to obtain a commonly based, objective appreciation of the quality and quantity of the hardware and the associated methods and technology being used in each shipyard.

Since that time, the system has been formally applied in Canada, France, Egypt and India.

Information on the technology and methods employed in each shipyard is collected by way of a survey of these principal operational categories: A. Steelwork Production B. Outfit Production and Stores C. Other Pre-erection Activities D. Ship Construction and Outfit Installation E. Layout and Materials Handling F. Environment and Amenities G. Design, Drafting, Production Engineering and Lofting H. Organization and Operating Systems These categories in turn have been broken down into 70 elements.

Each of the 70 elements covers a discrete shipbuilding operation or procedure.

A descriptive set of standards for each of the 70 elements was prepared. These standards consist of examples of methods and practices which typify each of four levels of technology for each element. The surveyor is thereby able to assign a "level of technology" to each aspect of shipyard operation which is studied.

During the survey, the "closest" whole level number is marked and comments peculiar to the shipyard and element being studied are recorded.

The selection of the U.S. shipyards to be surveyed was based primarily on size, employment and product. Since the survey included foreign shipyards building primarily for deepsea commercial service with some naval construction, the largest of the U.S. shipyards building for this service were selected. These shipyards are now building over a broad span of complexity and ship size, from a nuclear-powered aircraft carrier and submarines to gas turbine-powered frigates and from commercial ships ranging from a 10,000-dwt tanker to 395,- 000-dwt ultralarge crude carriers (ULCCs) and liquefied natural gas (LNG) ships.

All surveyors, however, used the same standards and essentially the same survey techniques.

Several steps were taken to assure consistency of survey results.

First, during the week of June 5, 1978, two senior members of the APA staff conducted a workshop for the six MEL surveyors on survey content and procedure.

The workshop covered in detail what was included in each of the 70 elements and a discussion of the four technology levels for each element. This workshop and the ensuing exchange of views enabled the U.S. surveyors to be on the same "wavelength" as their British counterparts.

The second step taken by MEL to assure consistency and comparability of data was to design data sheets for collecting data.

The third step took place after the survey when all the surveyors met and exchanged annotated data sheets. Initially, each surveyor assigned a technology level to each element he surveyed. When the data sheets were exchanged with the counterpart surveyor on the other team, the level assignments were withheld and the counterpart surveyor read the notes and made his own level assignments.

Then, the two surveyors compared notes and reached agreement on the level assignments.

This was done between the three pairs of surveyors that made up the two teams. It turned out that the surveyors were in agreement at least 90 percent of the time.

The fourth and final step took place in England. During the process of comparing U.S. shipyards with foreign counterparts, each level assignment was reviewed using the surveyors' notes with the same staff engineers who conducted the workshop so as to assure consistency with the APA survey of the foreign shipyards.

The selection of foreign shipyards took into account all the information contained in the descriptions of the U.S. shipyards provided by MEL. For all the foreign shipyards, levels of technology have been assigned in accordance with the same standards by which the U.S. shipyards were judged. In half of the shipyards, APA had conducted a full survey of facilities, equipment, technology and methods. For the remaining shipyards, senior APA staff members had spent a minimum of two manweeks in each shipyard during the past three years. In selecting comparable foreign shipyards the following criteria were used: work experience past and present, maximum ship length, number of employees, physical size, and type of shipyard, that is, new or redeveloped.

Comparison and Analysis The approach was to go from the broad to the detail level, from the eight categories to the 70 elements. More specifically: 1. The average technology levels of the U.S. and foreign shipyards for each of the eight categories are presented in four different ways to provide a broad p e r s p e c t i v e of the differences found.

2. Certain of the 70 elements are identified as critical and are presented in some detail.

3. Areas in which the U.S. shipyards measure favorably are identified.

4. Some of the causes of technology level differences are identified.

The data developed during this t e c h n o l o g y survey provide a wealth of detail for comparison and analysis. Some of the information presented in this paper shows the following: The U.S. shipyards lead the foreign shipyards only in Category B, Outfit and Production Stores. Average technology levels are the same for Category H, Organization and Operating Systems.

For the remaining six categories, U.S. shipyard technology levels are lower on the average, the greatest disparities arising with Categories C and F, Other Preerection Activities and Environment and Amenities, respectively.

The first four categories (A-D) cover the technology employed in the "hands-on" manpower- intensive part of a shipbuilding project. Two of the remaining four categories primarily concentrate on the workplace and working conditions. The last two deal with the engineering and systems elements which direct and control the hands-on work.

In actual fact, these last four categories are supportive since their purpose is to make it possible for the workforce to complete the ship in as short a time period as possible with minimum expenditure of manpower.

The shortfalls in three of the first four categories stem from two broad causes. One concerns facilities and equipment, for example, covered workplaces, semitandem building berths, heavylift cranage. The other concerns items which are amenable to solution by thoughtful execution of the elements comprising the last four, and particularly, the last two categories. Examples include the adoption of extensive preoutfitting practices, construction of modules, and improved dimensional control. In a number of cases, management initiative alone is all that is needed.

Early in the assessment of the survey findings, it was noted that the technology levels of the larger shipyards were higher than those of the smaller shipyards. The major U.S. shipyards were divided into three size groups of two, six and five shipyards — large, medium and small, respectively — to test this observation.

The foreign shipyards were divided into comparable groups of four, ten and seven shipyards by keeping them with the specific U.S. shipyards with which they are compared throughout the survey.

This showed that mediumsized U.S. shipyards compared least favorably with their counterparts.

On the average, the U.S. shipyards were assigned high technology levels on those elements involving the coordination and control of shop and ship work.

The very nature of the task of meshing all of the actions, physical and otherwise, essential to building a complex ship, coupled with Department of Defense work management requirements, certainly has contributed to this good showing.

Summary The primary objective of this survey is to provide shipyard management and the Government with comprehensive information on which to base and evaluate plans for improving shipbuilding and technology.

U.S. shipyards on an average are using a lower level of technology than foreign shipyards in six of the eight major categories studied.

The survey shows that of the 70 elements examined, foreign shipyards, based on overall averages, employ a higher level of t e c h n o l o g y in 51 cases. When shipyard size is considered, the larger the shipyard, the higher the technology. This is true for both U.S. and foreign shipyards.

The smaller of the major U.S.

shipyards tend to be more on a par with their foreign counterparts.

The most marked differences in technology levels are found in the medium-sized shipyards that account for nearly half of the major U.S. shipyards. 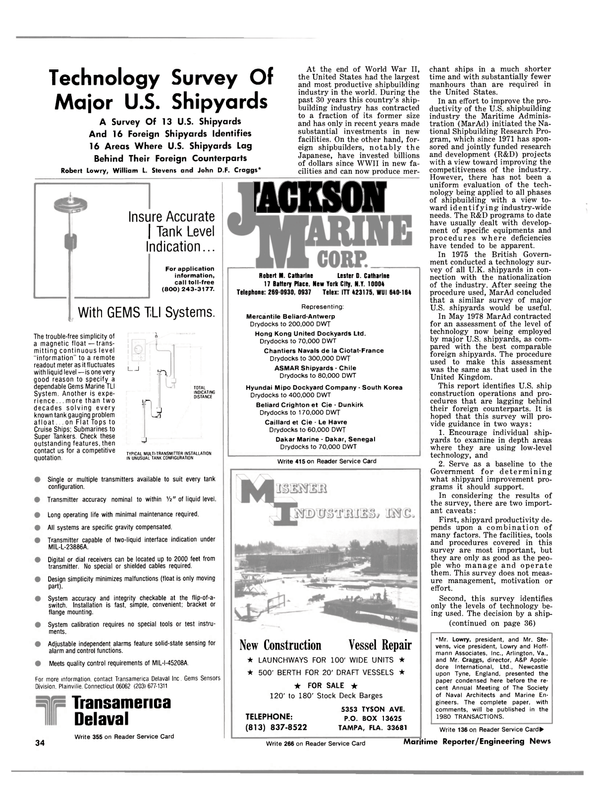