Three appointments have been made in Crowley Maritime Corporation's International Division, according to a recent announcement by Richard F. Andino, San Francisco, Crowley vice president and general manager of the division.

Tom Pickford has been appointed manager of marine operations, a newly created position with responsibility for coordinating the division's efforts in all facets of marine equipment evaluation and control. Mr. Pickford was previously i n s t r u m e n t a l in various Crowley joint venture operations, including a recent stint as managing director of a Tokyo-based joint venture service. He is based in San Francisco.

Bill Coleman has been named division area manager f o r Central America and is based in Mexico City. He is responsible for developing markets throughout Central America and r e p r e s e n t i ng Crowley's interest in TAB, a joint venture with the Mexican steamship company T r a n s p o r t a t i on Maritima Mexicana S.A. TAB provides equipment and services to the oil and marine construction industries in Mexico and Central America. Mr. Coleman brings over 15 years' maritime experience to the position, including service for Crowley in Indonesia and the Caribbean.

Cecil Payne has assumed responsibilities as project manager of a TAB rock-haulage contract at Dos Bocas, Mexico, the site of a new tanker terminal. Prior to this appointment, he served in a number of capacities for Crowley, most recently as director of special projects for Crowley's Caribbean Division, Jacksonville, Fla. 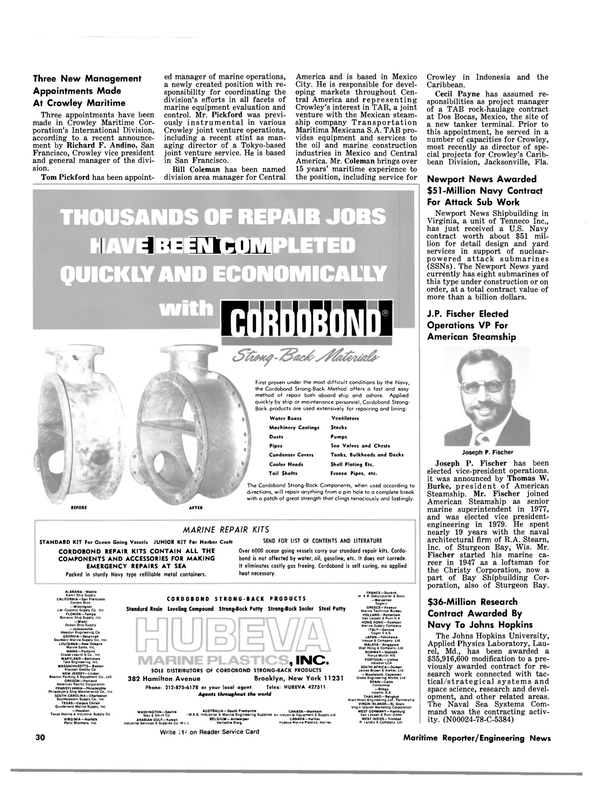