A joint meeting was held in November at the Fort Meyer Officers' Club by the Chesapeake Section of The Society of Naval Architects and Marine Engineers and the Washington, D.C. Section of the Marine Technology Society.

The presentation by Mr. Sherwood began with a brief history of the National Science Foundation's Deep Sea Drilling Program, which began in 1961 when the CUSS I drilling platform undertook nine days of drilling in 3,240 feet of water off LaJolla, Calif.

The program continued on using more capable platforms and culminated in the use of the drillship Glomar Challenger, which is now obtaining deep ocean sediment samples off the Southeast Coast of the United States.

During the past 19 years, the Deep Sea Drilling Project has added materially to our under- standing of the earth's crust, including data leading to the development of the plate tectonics model. In addition, s i g n i f i c a nt technical advances in offshore drilling, such as dynamic positioning, satellite navigation, sonar drill hole re-entry techniques, improved core bits and equipment, and improved coring techniques are now being used by the offshore oil drilling and mining industry. Other recent developments include the ability to run intermediate casings in deep water (18,000 feet or greater), successful fishing and recovery of a drill string in 18,000 feet of water, improved deepwater drill string designs, and the development of instruments capable of obtaining data from deep holes.

The limitations of the Glomar Challenger have led to the need for a more capable platform to support a major new initiative, the Ocean Margin Drilling Project, which entails drilling in 13,- 000 feet of water to depths of 20,000 feet below the subsea bottom.

This effort will be jointly funded by the U.S. Government and the oil industry, and primary emphasis will be placed on increasing basic scientific knowledge about the passive ocean margins where thick sediments exist and sophisticated well control techniques and blowout prevention are required.

It is intended to use the Government- owned Glomar Explorer for this program because of its seakeeping and stability characteristics, deadweight capacity, available volume for laboratories, and precise stationkeeping system.

To date, a baseline conceptual design has been completed and NSF intends to complete an updated Baseline Design, including trade-off studies, and to issue a request for proposals for a program systems integration contractor in Fiscal Year 1981. 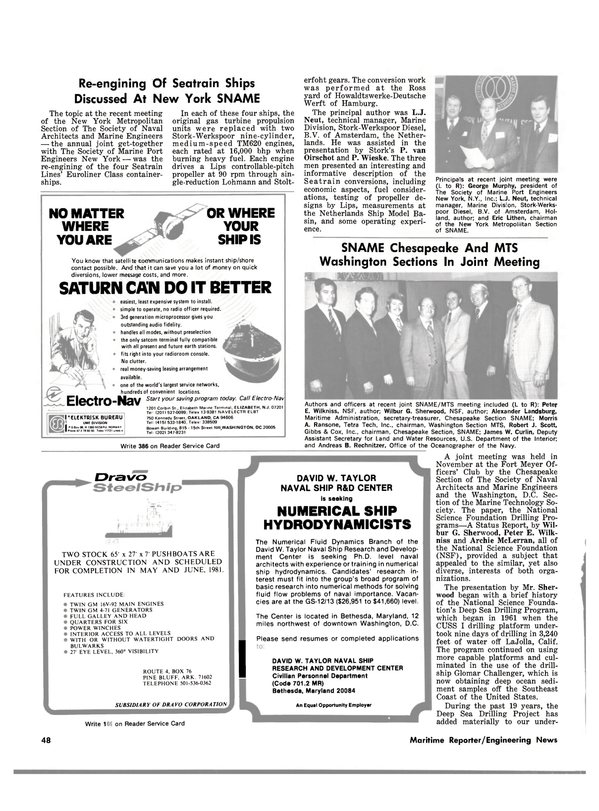