Promet Private Limited of Singapore, in collaboration with Baker Marine Corporation of Ingleside, Texas, has announced the signing of contracts with Sedco, Inc. of Dallas to construct two self-elevating, cantilever beam mobile drilling platforms. These repeat orders from Sedco follow a contract won by Promet early in 1980 to construct a 151 by 156 by 18-foot platform that is scheduled for delivery in March 1981.

Baker's responsibility lies in the design and engineering of the platforms, and furnishing to Promet all structural design drawings and system schematics required for construction according to the standards of the American Bureau of Shipping.

Construction has begun on the first rig and the second will be started in March 1981, with deliveries scheduled for the first half of 1982. Both rigs will measure 174 by 162.5 by 18 feet, and will have three independent truss legs 301.5 feet long. The units will be raised and lowered by means of Baker Marine rack and pinion electrohydraulic drives.

Both BMC 200 I.C. class jackups will operate in water depths up to 200 feet, and will have a jacking speed of 60 feet per hour.

Each rig will have 10,800 short tons of total holding capacity in drilling position. Designed with three-level quarters, each rig will provide accommodations for 70 personnel.

At the same time, Promet announced receipt of contracts from Sun Contractors for construction of two four-legged jackup barges — making a total of three units of that type and two three-legged barges ordered from Promet by Sun Contractors. The latest barges ordered will measure 130 by 69 by 10 feet, and are scheduled for delivery in September 1981 and January 1982. 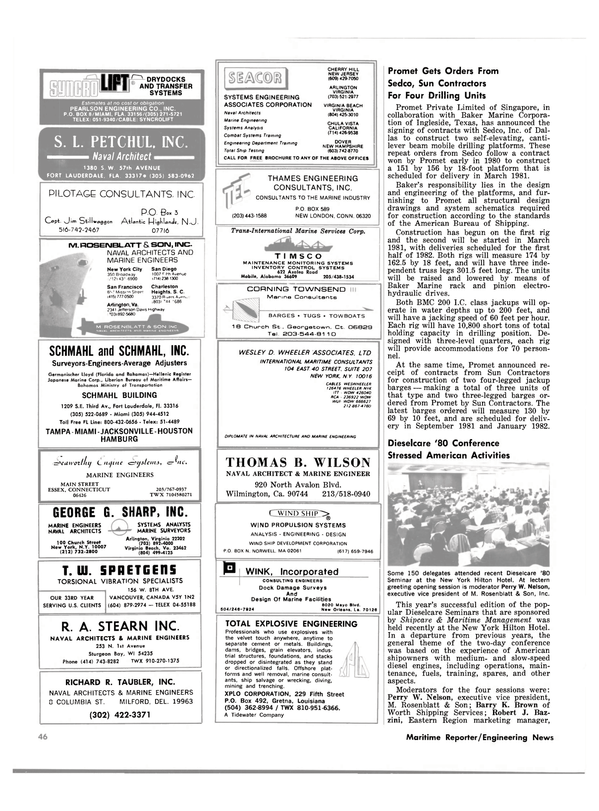