The Australian Department of Transport has improved its oil-spill response capability with the purchase of four Class I re- covery vessels from MARCO Seattle. The MARCO skimmers are the first self-propelled Filterbelt® skimmers ordered by Australia, and are part of a government program to improve that nation's response to major oil spills. A skimmer will be stationed at the strategic population/industrial centers of Brisbane, Melbourne, Perth, and Sydney, and can be deployed quickly from these centers to any spill site.

With a top speed of 18 knots, the Class I is ideal for rapid first response to oil spills on waterways, bays, and harbors. Once at the spill site, the Class I skims at approximately 2-3 knots and removes all oil and debris from its path, generally as fast as it is encountered. In addition, the aluminumhulled vessel is compact and lightweight for easier transfer to distant spill sites. It can be carried overland on its own towable trail- er, or to more remote locations by C-130 aircraft.

At the heart of the skimmer is the unique MARCO Filterbelt system, considered by many to be the most effective system for removal of all types of oil from the surface of water, including light distillates, heavy weathered crude, and Bunker C. The system operates as well under moderate sea conditions as in calm water.

The Class I's principal dimensions include a length of 28 feet (8.5m), a beam of 8 feet (2.44m), and a depth of 3 feet (0.9m). Standard equipment includes a diesel/hydraulic power system for the Filterbelt, a 500-gallon oil sump, an automatic decanting system, a debris collection basket, and twin 60-horsepower outboard engines.

MARCO is a leading designer and builder of skimming vessels, ranging from the 28- foot Class I to the 60-foot Class III. Since 1972, MARCO has delivered more than 70 skimmers worldwide to government agencies, oil-spill clean-up cooperatives, and major oil companies. 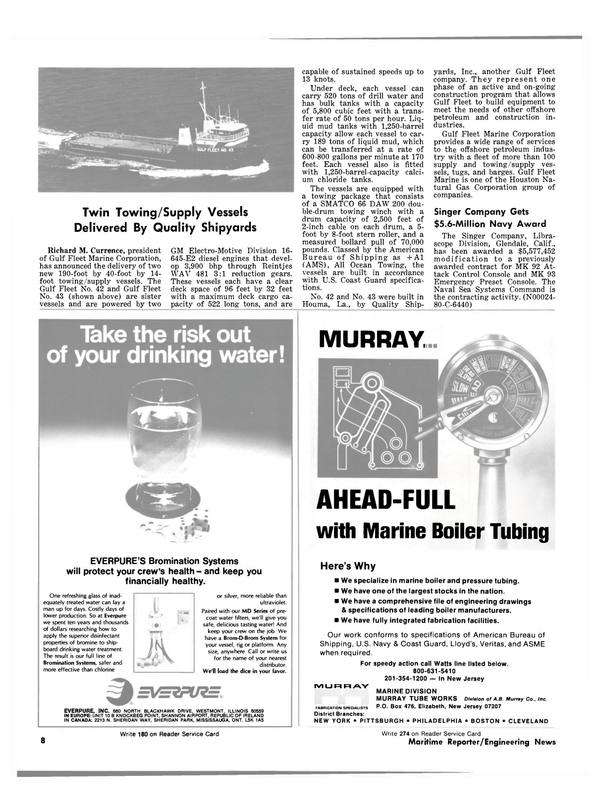