Electro-Nav To Furnish Electronics Parts And Service For Polish Ships

Electro-Nav president Robert E. Negron has announced that his company had reached agreement with the Marine Division of Unitra Unitech to furnish spare parts and services as required for the marine electronics of all Polish-flag vessels calling at U.S. ports.

Eugeniusz Kazimierczak, director of Unitra Unitech, explained that his organization is charged by the Polish Government with providing a wide range of technical services to industrial enterprises in his country, including shipyards and ships. "Vessels affected by this agreement," he said, "include cargoliners, passenger ships, and the fishing craft of DALMAR, the Polish State Fishing Organization." Jerzy Jacniacki, manager of Unitra Unitech's Marine Bureau, whose division is responsible for the technical needs of all Polish shipping at home and overseas, said that: "Some 400 Polish-flag vessels call at American ports each year. They may occasionally need spare parts and service for their communications and navigation equipment, and we are far away. We fully expect this arrangement with Electro-Nav to expedite service to our vessels, save time, speed turnaround, and cut servicing costs." Electro-Nav will service vessels in every major port in the continental U.S., and will assign its sub-agents to provide parts and repairs in more remote ports. The agreement goes into effect immediately. 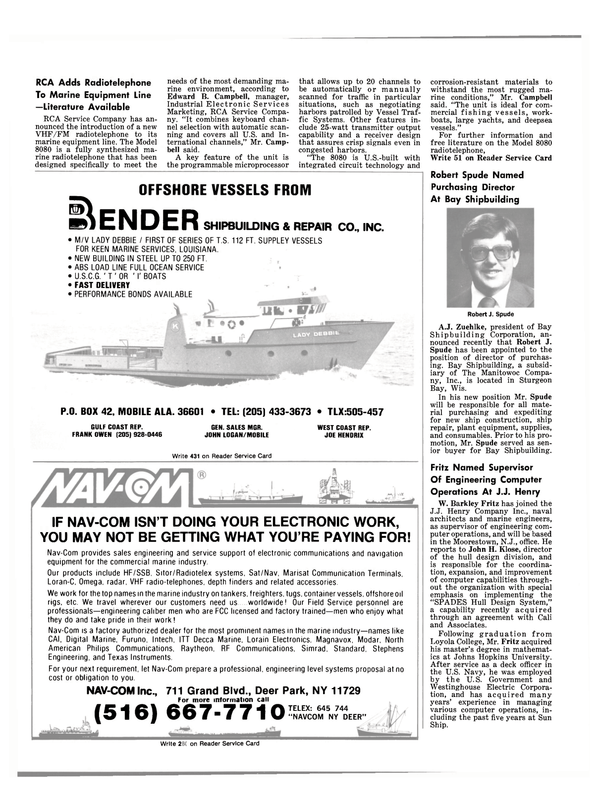