Bring together a highly experienced trawl skipper and one of the world's leading builders of fishing vessels and machinery and you have the makings for an impressive new boat. Such was the case when MARCO Seattle's new North Pacific fishing vessel Dona Genoveva was christened recently for Walter Kuhr.

Mr. Kuhr has been a fisherman for more than 30 years, starting at the age of 17 in his native Bremerhaven, Germany. He is known both for his substantial catches and for his trawl designs.

The world has been Mr. Ruhr's fishing ground, from the North Atlantic to the South Pacific to the Bering Sea. Success has likewise followed him from Greenland to Chile to Alaska.

The veteran skipper will now turn his attention again to the North Pacific with the Dona Genoveva.

He has worked these fisheries before, from Oregon to Alaska, with his former vessels Bold Lady (a 78-foot trawler), Pacific Surf (an 85-foot trawler), and the Sigried K, a 97-foot crabber presently under the command of his son, Walter Kuhr Jr., who is also a co-owner of the new vessel.

The Dona Genoveva was christened by Mrs. Marta Kuhr, who gave the vessel the name of her grandmother, Lady Genoveva.

Sharing in the occasion were coowners Robert F. Allen and Charles R. Hart, both officers of MARCO Seattle.

The design includes a doublebottom configuration that has been extended forward to include virtually the entire engine room area. The three-tank fish hold arrangement is insulated and employs a chilled sea water and spray brine refrigeration system.

The hydraulic system features a built-in protection system that automatically shuts down the hydraulic pumping equipment in the event of a potentially damaging situation, such as a drop in the oil tank level or engine overspeed.

A u x i l i a r y power is provided through Caterpillar diesel sets with KATO generators and MARCO HPD hydraulic pump drives.

A comprehensive array of electronics and navigational aids is aboard, including a complete Furuno fish-finding system, with net sounder for mid-water and bottom trawling, plus two radars, two Lorans, a weather facsimile recorder, and a variety of communications gear.

After the christening, the Dona Genoveva departed for Alaskan waters, and will then move on to trawling operations in the Bering Sea. 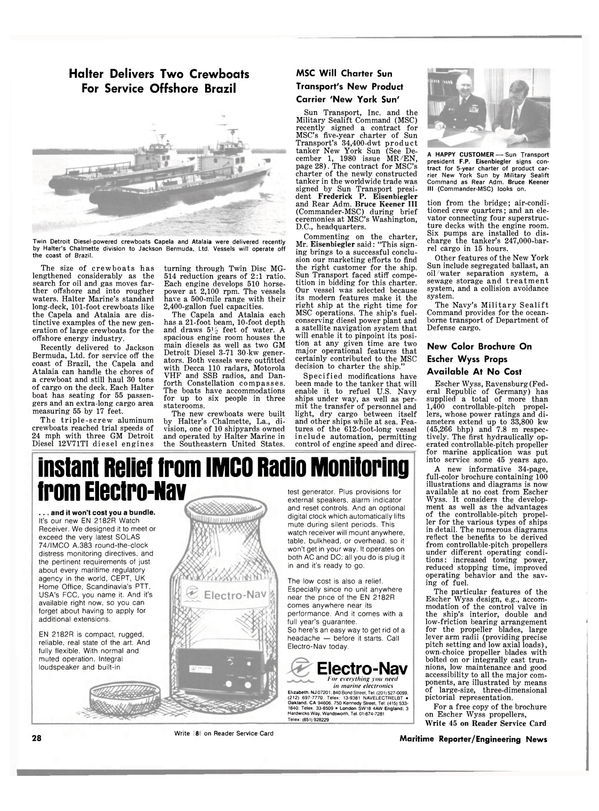