Christening ceremonies were held recently at Avondale Shipyards near New Orleans for the first of three integrated catug/ barge vessels currently under construction there for use by Occidental Petroleum Corporation.

The Oxy Trader is designed to carry phosphoric acid and other liquid chemicals in six stainlesssteel center tanks, and petroleum products in 10 wing tanks.

Mrs. Cynthia Dorgan, wife of John J. Dorgan, executive vice president-finance and administration of Occidental Petroleum, was the vessel's sponsor. Mrs. Barbara Culhane assisted as matron of honor; she is the wife of John H. Culhane, vice president-planning and business development for Occidental.

The Oxy Trader has an overall length of 677 feet 4 inches, beam of 99 feet, depth to main deck of 50 feet, and design draft of 36 feet. Deadweight at design draft is approximately 39,500 long tons. The catug is powered by twin Colt-Pielstick PC2.5V400 diesel engines built by Fairbanks Morse, each with a maximum continuous rating of 9,100 bhp, driving two 20-foot-diameter propellers.

The new vessel is one of 10 Catug units currently under construction in the United States.

Occidental Petroleum will use the Oxy Trader in its worldwide chemical and petroleum trade.

Only two Catug units, the Seabulk Challenger and the Seabulk Magnaches, built in 1974 and 1976, respectively, for Seabulk Corporation, an affiliate of Hvide Shipping, Inc., have been in operation, serving the U.S. Gulf Coast.

The Catug system, developed by Hvide Shipping, which holds a license to patent rights on the design, is an integrated catamaran type tug and barge combination designed for efficiency, allweather performance, and speed similar to conventional vessels.

However, the combination of twin-screw, dual propulsion units substantially reduces operating costs and is more maneuverable than conventional vessels.

and Mrs. Kenneth Stieffel, served as flower girl. The position of flower girl is traditionally given to the daughter of an Avondale employee. Miss Stieffel's father is employed in the Sheet Metal Shop at the Main Plant.

Avondale Shipyards, Inc. is a subsidiary of Ogden Corporation, which operates in the major markets of metals, transportation, and food. Although principally a shipbuilder, Avondale is a diversified company with f a c i l i t i es that include repair yards, a foundry, a special products division, steel sales, and a facility near the Gulf at Bayou Black, La., that builds offshore drilling rigs.

Occidental Petroleum is a major producer and distributor of chemicals for agricultural, consumer, and industrial markets.

The multinational company is under the leadership of board chairman Armand Hammer. 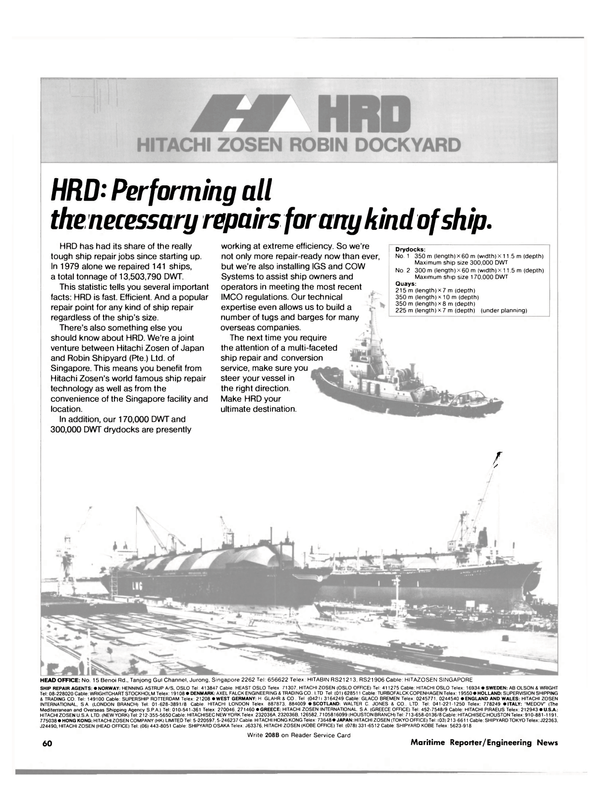