Although the recent commismissioning of the guided-missile frigate HMAS Adelaide appeared ordinary and publicity-shy at Todd Pacific Shipyards, it was a historic event.

First, it was learned Her Majesty's Australian Ship Adelaide is considered the newest and first Australian Navy ship built for Australia in 12 years. Next, the 445-foot computerized escort ship is the first of its class of Australian ships to be commissioned in a United States shipyard. Todd Pacific Seattle is Washington State's major shipyard, a wholly owned subsidiary of Todd Shipyards Corporation, the largest independent shipbuilder and repairer in the United States.

When Adelaide sails for Australia after extensive training and trials in the U.S. within a year, she will be the first gas-turbinepowered vessel in the Australian Navy. The Adelaide was turned over by Todd officials to the Australian Navy, and was commissioned into active service in formal ceremonies November 15 at Todd's facilities on Harbor Island, where Comdr. G.R. Lamperd of the Royal Australian Navy (RAN) of Canberra was given HMAS Adelaide's command.

The Lord Mavor of Adelaide, the Right Honorable J.V.S.

Bowen, was guest of honor at the ceremony, and on behalf of the City of Adelaide presented the ship with a sterling silver plate and a special trophy to commemorate the event and the tie between the city and the ship.

The Adelaide is the first of four General Electric gas-turbinepowered FFGs being built by Todd Pacific Seattle for the Australian Navy. The next three ships will be named for the cities of Canberra, Sydney, and Darwin.

Four of the 12 FFGs under Todd contract are being purchased by the Royal Australian Navy under a "foreign military sales" agreement with the United States Government.

The Adelaide is 445 feet long and displaces 3,600 tons. The ship is fitted with a 76-mm gun, missile launcher, torpedo tubes, and is capable of carrying two helicopters.

She has a complement of 183 officers and men. 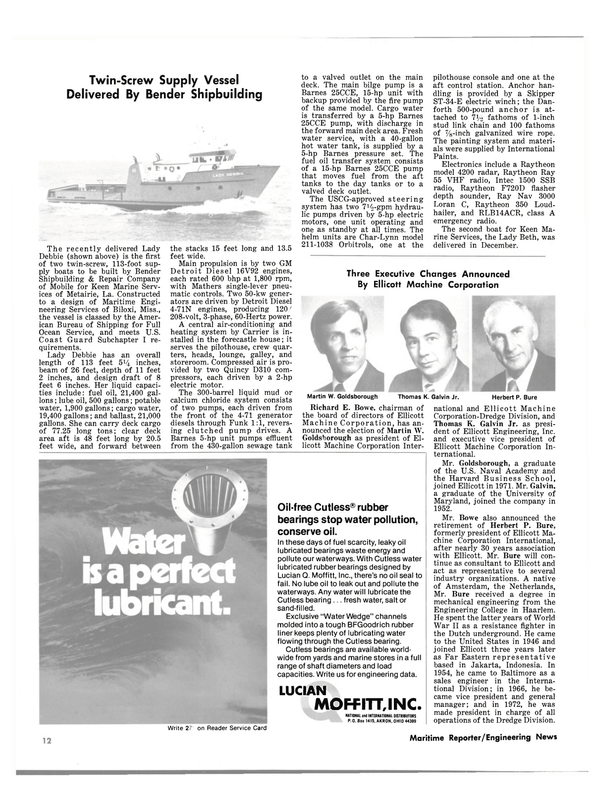