Upon delivery, the rig will work in the Gulf of Mexico for Gulf Oil.

The Comanche is a mat-supported jackup designed for deepwell drilling operations. It features a cantilevered substructure and offers the capability of being aide to position its drill floor over existing offshore production platforms in order to drill developmental wells or to rework existing wells.

The Comanche was designed and built to comply with current safety standards of the U.S. Coast Guard plus the American Bureau of Shipping standards for construction of o f f s h o r e drilling units.

The rig consists of a platform measuring 157 feet by 120 feet supported by three 9-foot-diameter columns fixed to a mat that is 197 feet by 160 feet. Outfitted with deep-well drilling equipment, the rig will operate in waters of up to 150 feet. The Comanche contains onboard, air-conditioned living accommodations for 52 persons, complete with sleeping quarters, galley, recreation area, and laundry rooms.

George L. Temple, president of Temple Drilling Company, earlier announced the signing of a contract with Bethlehem for construction of a 200-foot water depth rig, the Cheyenne, to be delivered in April 1982. The rig will be designed by Beaumont and built at Bethlehem's Sparrows Point, Md., shipyard. 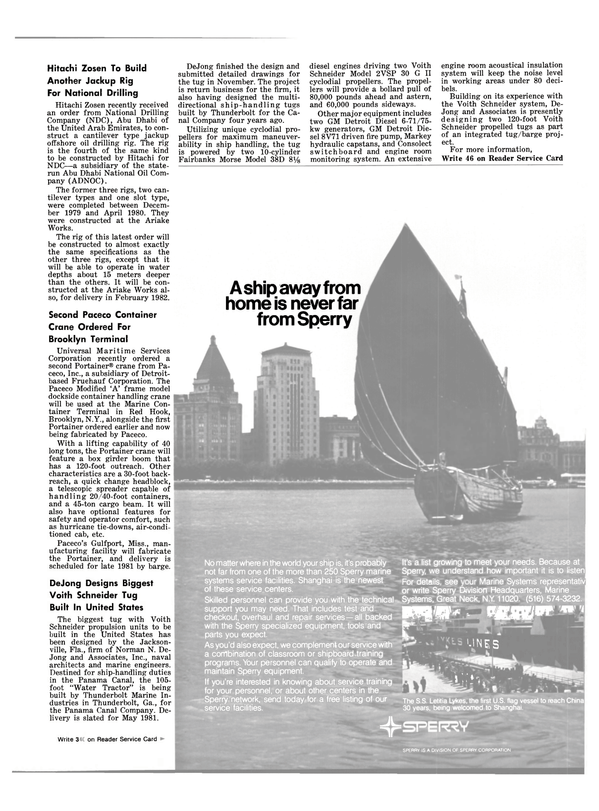