Shipbuilding and other maritime interests should get more involved with the U.S. Coast Guard, the International Maritime Organization (IMO), Congress, and other regulatory agencies to protect their own interests and avoid unnecessary laws and inappropriate regulations that could cost billions of dollars.

That was one of the messages delivered by Rear Adm. Clyde T. Lusk, commander of the Coast Guard's Eighth District, and Capt. W.A.

After telling OMSA members of the Coast Guard's expanding role in safety, environmental, and enforcement missions, Admiral Lusk urged his civilian audience to get involved because budgetary and manpower limitations of his service could cause the interests of some to be overlooked.

With respect to the IMO in London, Admiral Lusk said, "It is terribly, terribly important that someone look out for your interests over there. Somebody out there is getting involved in your knickers." IMO writes conventions and regulations that affect domestic trade as well as the worldwide marine community.

" . . . When you ask for people to come to Washington to give you an input and nobody shows up, and when you seek somebody from the private sector to go with you on your delegation and help you and nobody comes . . . then you get what you deserve," the admiral said. He added that the offshore marine service interests have " . . . been ably represented and I think you people have profited from it." Prior to the admiral's remarks, Capt. Mayberry told the OMSA members of proposed or pending regulations on certification of seamen, drug testing, physical examinations, firefighting examinations, and new license requirements for persons working on offshore drilling units.

He also discussed new Safety of Life at Sea (SOLAS) proposals on life rafts, new Coast Guard standards on exposure or immersion suits, additional manning requirements on vessels, new proposals regulating the use and operation of cranes on liftboats and offshore installations, and standing boat legislation. 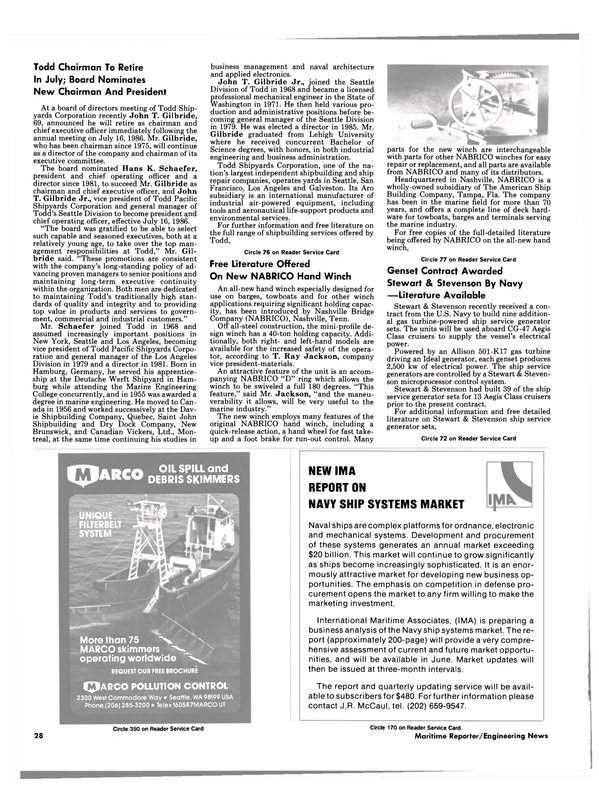