With the recent delivery of the 4,300-bhp tractor tug Brooks K.

McAllister (photo), McAllister Brothers Inc. of New York announced the formation of McAllister Towing of Florida Inc. to begin a ship docking service in the Port of Jacksonville.

Capt. F. Cecil Payne has been appointed general manager of McAllister Towing of Florida. A former tugboat captain, he was for many years general manager for Crowley Maritime in Jacksonville.

The McAllister organization has been active in the boatbuilding business in the Jacksonville area for years. The firm's shipyard, Offshore Shipbuilding on the St. Johns River, has owned and constructed some $30-million in equipment, the latest being the Brooks K.

Although McAllister vessels operate throughout the Caribbean, South America, and as far away as the Persian Gulf, the bulk of their activities are conducted on the major ports of the U.S. East Coast.

The new Brooks K. is fitted with two Schottel rudder-propeller drives (Monel SRP 1100/1001) driven by twin GM Electro-Motive Division 16-645EZ diesel engines. This propulsion design features two right-angle drive units located under the stern of the vessel. Each unit can rotate 360 degrees to provide virtually immediate and complete control of thrust and direction. The propellers are enclosed in nozzles to further enhance the bollard pull of the vessel.

The Schottel rudder-propeller system produces a high degree of maneuverability and power that provides substantially increased economy and safety for the new tugboat.

This advanced tractor tug design, though common in most of the modern European and Far East ports, is the first placed in service on the U.S. East Coast, according to company president Brian A.

The Schottel Rudderpropeller is the nucleus of the Schottel propulsion system. Developed more than 30 years ago, it created completely new possibilities in the design and maneuvering capabilities of modern harbor and seagoing tugboats.

The Schottel system transforms engine output into optimum thrust by use of specially designed gears and a proportional propeller. Full thrust is provided to move the tug almost instantly in any direction by rotating the lower gearbox, without power loss, and with maximum maneuvering capability at full power ahead, astern and laterally. Turning circles and stopping distances at full power can be executed in approximately one tug length.

Power is transmitted by the Schottel Rudderpropeller through silent-running, spiral-bevel gears; packing seals are fitted throughout.

Fixed or controllable-pitch propellers are of the push-type, designed to suit the individual vessel. For tugboat propulsion, most of the units are fitted with nozzles to increase thrust. Schottel Rudderpropellers are available in a power range from 27 to 6,000 horsepower.

The 4,300-bhp Brooks K. has been joined in the Florida port by two 2,400-bhp tugs, the Dee Dee McAllister and the Danielle McAllister, and additional boats are planned for the new service. 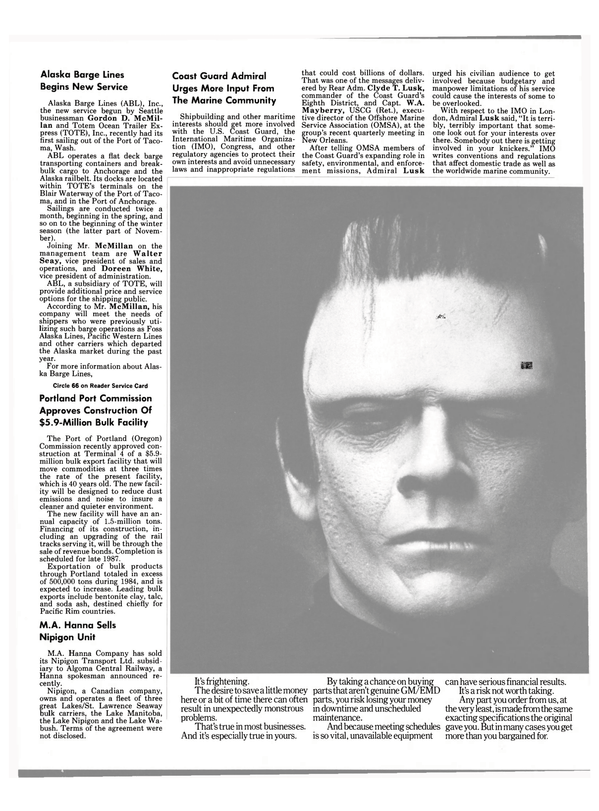