—A SUPPLEMENT— This year Newport News Shipbuilding and Dry Dock Company (NNS), Newport News, Va., is celebrating its first century of leadership in the shipbuilding and ship repair industry. More than 700 vessels— from small tugboats to giant, nuclear-powered aircraft carriers— have carried the words "Built by Newport News" to the oceans of the world.

The yard was founded by Collis P. Huntington, one of the builders of the first transcontinental railroad, as a repair facility for ships involved in the coal trade. Incorporated as the Chesapeake Dry Dock and Construction Company in January 1886, the first business for the fledgling yard was the repair of sailing schooners. Its first drydock, hailed as "a wonder of the age," began operation in April 1889 with the docking of the naval monitor Puritan. In February 1890 the name of the company was changed to Newport News Shipbuilding and Dry Dock Company.

In that same year the company received a contract for its first newbuilding, a 90-foot tugboat named Dorothy. The quality built into that first hull is demonstrated by the fact that she remained in active service for more than 60 years until she was extensively damaged in a collision.

In 1976 NNS retrieved her and brought her back home; now restored to her original appearance, she is on permanent display at the yard as a tribute to five generations of shipbuilders.

Long Association With Navy The company's first U.S. Navy contract in 1893 was for the construction of three gunboats, the Nashville, Wilmington, and Helena, and marked the beginning of a long association between NNS and the Navy that continues today. Soon after she entered service, the Nashville became famous by firing the first shot of the Spanish-American War.

In December 1907, President Theodore Roosevelt's Creat White Fleet set sail from Hampton Roads for its round-the-world voyage to demonstrate that the United States had come of age and was a naval power to be reckoned with. The Newport News yard had built seven of the 16 battleships in that fleet— the Kearsarge, Kentucky, Illinois, Missouri, Louisiana, Minnesota, and Virginia.

From 1904 until the start of the war in Europe in 1914, the shipyard's reputation grew. Contracts were received for 15 naval vessels and 84 commercial ships, including ferries, tankers, freighters, and passenger liners. By the time the U.S.

Navy had been constructed by NNS.

The recession of the early 1920s brought hard times to the U.S. For the shipyard, a combination of circumstances, including an unprecedented 10-year Naval shipbuilding "holiday," made the years 1921 and 1922 among the most difficult in the yard's history. Work ceased on contracts worth $70 million, and in a single year the company's work force dropped from 10,000 to 4,000.

With no ships to build, the shipyard under the leadership of Homer L. Ferguson began to diversify, manufacturing railroad cars, traffic signal lights, and various types of industrial equipment. This period also marked the company's entry into the water power field, the only divergent field of the 1920s that continued in volume beyond the Depression.

NNS has built some 250 hydro turbines for many power projects, including the Grand Coulee, Chief Joseph, and Hoover (Boulder) Dams.

World War II Since the contract in 1930 for the Ranger, the first ship designed and built from the keel up as an aircraft carrier, the name Newport News has become synonymous with the carrier.

With only one exception, NNS has been the lead yard in designing and construction every class of carrier built by the Navy. Under the National (Industrial) Recovery Act of 1933, NNS received contracts for the aircraft carriers Yorktown, Enterprise, and Hornet. All three ships played decisive roles in the Pacific carrier battles during World War II.

When Pearl Harbor was attacked in 1941, the shipyard's already heavy activity in Naval construction was accelerated again. Forty-six ships were delivered to the Navy during WWII; altogether, 185 NNSbuilt ships participated in the war.

The yard's efforts during wartime were devoted almost exclusively to the production of eight Essex Class carriers, with a delivery schedule of one every three months. No other shipyard approached this record.

Such renowned ships as the Randolph, Franklin, and Ticonderoga belong to this group of NNS-de- ^igned carriers.

Newport News reached its peak employment in April 1943 when more than 31,000 employees were in the work force.

Other construction at the yard during WWII included an ambitious program to build tank landing ships (LSTs). These ships were mass-produced, built six at a time in one of the big graving docks; a total of 18 were constructed in the high-priority year of 1942. Also during the war, the company pioneered the development of "baby flattops." The first conversion of these cargo ship hulls was completed in just 77 days. Used as escort carriers, they were intended primarily for antisubmarine and convoy duties.

Another WWII achievement was the construction of an entirely new shipyard at Wilmington, N.C., in 1941. Five years later, 21,000 shipbuilders had delivered 243 merchant vessels totaling more than 2 V2 million dwt.

Delivery of the 990-foot passenger liner United States highlighted the early 1950s. The largest passenger ship ever built in the U.S. and still the fastest ship of her size afloat, she still holds the Blue Riband for the fastest crossing of the Atlantic in both directions, averaging almost 36.5 knots (42 mph) on a full day's run.

Enter The Nuclear Age The 1950s also marked the yard's transformation into a nuclear facility.

The company's activities in the field of nuclear power have grown over the past 30 years at a pace that has established the yard as the world's largest builder of nuclearpowered ships. In 1959, the yard launched the Robert E. Lee (SSBN- 601), its first Polaris submarine.

The following year, its first attack submarine, the Shark (SSN-591), and the world's first nuclear-powered aircraft carrier, the Enterprise (CVN-65), slid down the ways.

Since then, the company has built or is building all six Nimitz Class carriers and more than 30 nuclearpowered submarines.

In 1968, Newport News Shipbuilding was acquired by Tenneco Inc., a diversified international company based in Houston. The benefits of the acquisition appeared quickly. One improvement involved the largest physical change in the company's history, begun in 1972 with the construction of a new North Yard on 150 acres of landfill.

This yard features a 900-ton gantry crane towering 23 stories over a 1,600-foot drydock, the most extensive such facility in the Western Hemisphere, and an 11-acre, allenclosed steel production facility.

Many operations in this new complex are automated, from steel handling and fabrication to the erection and transportation of huge subassemblies.

The first ships to be built in the North Yard were two LNG carriers. These were followed by the largest tankers ever built in the U.S., two 390,000-dwt ultra large crude carriers.

Advance Technology-Savings The three Nimitz Class aircraft carriers currently under construction in the North Yard are being built using state-of-the-art modular construction. Previous carriers had been built using small subassemblies and then outfitting after launching, a painstaking process that requried thousands of tons of material to be brought aboard the ship and custom-fitted. The modular construction being used now involves the joining together of huge subassemblies weighing as much as 900 tons, each of which is completely outfitted before installation. This technology is being used in the con- struction of the Theodore Roosevelt (CVN-71), the Abraham Lincoln (CVN-72), and the George Washington (CVN-73).

At her launching, the Roosevelt was then 17 months ahead of schedule and $42.1 million under budget.

The yard got off to a fast start with CVN-71 by completing in 23 months what had taken 40 months to complete with the previous Nimitz Class carrier, the Carl Vinson (CVN-70).

The advanced technology has enabled progress to be accelerated since the Roosevelt's keel was laid in late 1981. For the first time, the yard used structural Computer Aided Design/Computer Aided Manufacturing (CAD/CAM) to cut the steel for the carrier, helping speed fabrication dramatically.

Once the units come out of Steel Fabrication, they are joined with other assemblies into modules and preoutfitted with much of the piping, ventilation, and electrical equipment they need.

Advanced technology is also paying off on the construction of the fifth and sixth Nimitz Class carriers.

At mid-1985, construction of the Abraham Lincoln and the George Washington was reported by the Navy to represent $450 million in savings.

These techniques are being applied at the yard to an even greater challenge—the building of nuclearpowered submarines. The company has committed $300 million to the construction of the most modern and efficient submarine construction facility ever conceived. Computerized manufacturing technology, including robots and lasers, is being used to design and build the vessels, affirming NNS's role as the leading innovator in the U.S. shipbuilding industry.

Following months of prodding by the Navy, Newport News recently indicated that it may be willing to bid on Trident submarines, a program thus far awarded entirely to General Dynamics, whose Electric Boat division has to date been given contracts for 13 of the 20 Tridents that are planned. The Navy orders only one Trident a year, at a price of about $1.5 billion.

If the Virginia shipyard becomes a second source for tbe Trident, it will represent a breakthrough for the Navy in its efforts to secure competitive bidding on its biggest procurements. Further negotiations are required, however, to decide how much the Navy will pay Newport News to help in gearing up to participate in the Trident program, and to set the ground rules for the competition with General Dynamics.

Newport News also competes with General Dynamics in the construction of Los Angeles Class attack submarines, four of which are awarded in eacb fiscal year. The Virginia yard currently has contracts for eight attack subs at a total cost of more than $2 billion. Also on order are three aircraft carriers of the Nimitz Class at a total price of $4.4 billion. With the future of aircraft carrier construction uncertain, however, the next decade may be the years of the submarine at the Newport News yard.

"The decision that has to be made in the next few years is where do we go besides shipbuilding," said Edward J. Campbell, president and chief executive officer. With the advance in building man-made islands, he speculates on the modular construction of a chemical plant and towing it to a site somewhere in the Third World, and a fleet of towed submarine tankers carrying oil underseas.

Today, Newport News Shipbuilding is a huge manufacturing complex employing some 30,000 highly skilled people, with state-of-the-art facilities encompassing almost 500 acres along 2.2 miles of the James River—the culmination of 100 years of shipbuilding. The shipyard enters its second century well prepared for the challenges ahead.

For further information on Newport News Shipbuilding's facilities and capabilities. 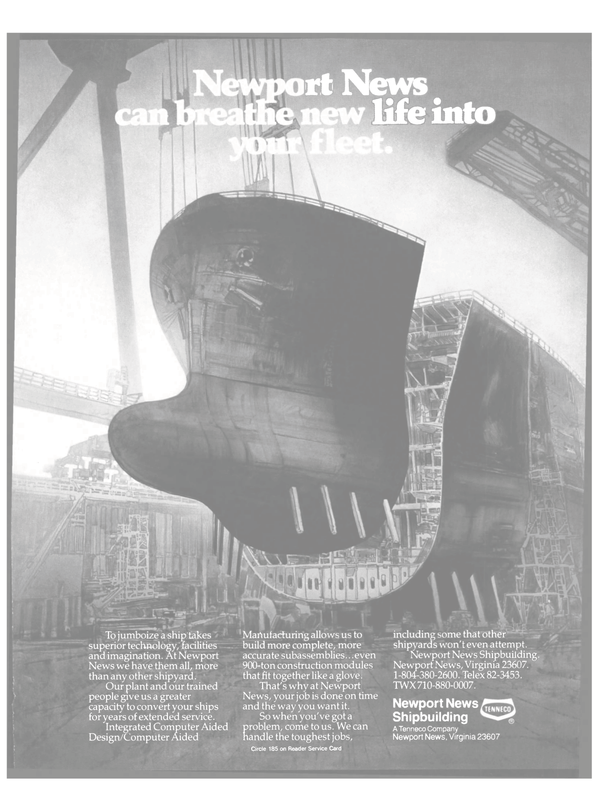