The 3.Maj Shipyard in Rijeka, Yugoslavia, recently launched the aft hull part of newbuilding No. 643 down sliding Slipway No. 1, a new technology for the use of inclined ways.

The decision to build Hull No.

The hull was designed with an overall length of 728.7 feet, and the slipway is serviced by cranes to the length of about 640 feet.

By use of steel wire ropes the aft hull was secured to the Goliath Gantry Crane that spans two slipways.

By employing constant force from the gantry, tbe aft part was guided down the sliding ways at a constant speed of just under 2 feet per minute for the total distance of 114.8 feet. The aft hull was stopped by effecting increased force from the gantry. After having been stopped, the aft hull was accurately positioned longitudinally and transversely by means of hydraulic presses, and then lowered by letting the sand flow out of the supporting blocks.

The complete operation, including sliding down, accurate positioning, and lowering of the hull part was carried out during two working days. A section containing Holds No. 5 and 6 was then inserted between the aft hull and the bow part.

For further information on the 3.Maj Shipyard, Circle 6 on Reader Service Card 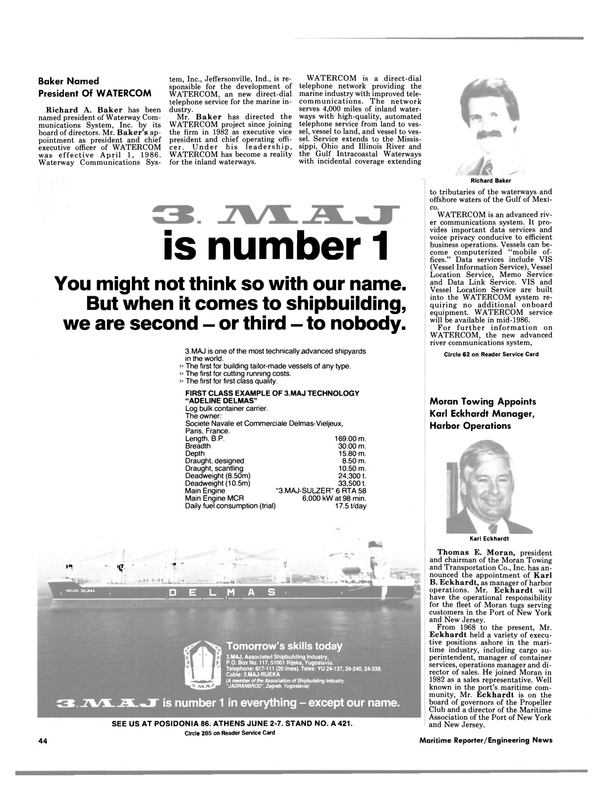 Read Unique Slipway Launch Of Aft Part Of Hull Performed At 3.Maj Yard in Pdf, Flash or Html5 edition of May 1986 Maritime Reporter