The 616-foot cruise ship was christened earlier at ceremonies at the Papenburg yard by Irene Panagopoulos Tsangridis, daughter of the chairman of the board of Royal Cruise Line, P.S. Panagopoulos.

Other principals at the ceremony included: Evangelos Giannopoulos, the Greek Minister of Mercantile Marine; Nicholas Skoulas, the Greek Undersecretary of State for National Economy; and Walter Remmers, the German Minister of Justice of Lower Saxony.

The Crown Odyssey also has 199 crew cabins and a complement of 443.

The luxury cruise ship is powered by a "father and son" four-engine plant consisting of two Krupp MaK 8M601 "father" engines with an output of 10,880 hp at 400 rpm each and two Krupp MaK 6M35 "son" engines, each developing 3,604 hp at 720 rpm. The plant produces a total of about 29,000 hp and a service speed of about 22 knots. The engine output is being transmitted via double reduction gears with integrated lamella couplings to the controllable pitch propeller system. The main and auxiliary engines are designed to operate on heavy fuel oil IFO 600.

Electrical power is provided by four diesel generating sets with a total generator capacity of 12,500 kva as well as one emergency generator with a capacity of 760 kva.

Two semi-spade rudders directly fitted behind the controllable pitch propeller and two bowthrusters ensure good maneuverability of the Crown Odyssey. Additionally, she is fitted with stabilizers which reduce her roll motion by 90 percent at a speed of 17.5 knots.

On board the Crown Odyssey there are a total of 11 public rooms including the "Seven Continents Restaurant" on deck 6 which seats 640 persons. The other public spaces are situated on the Odyssey, Lido and Horizon decks (7th, 8th and 11th decks). The Monte Carlo Court, which is located on the Odyssey Deck, includes a casino, bar and several boutiques. Forward of this area there is the Odyssey Show Lounge with submergible stage and seating accommodation for 500 persons.

Aft of the Court there is the Yacht Club, which has a 280-person capacity with an illuminated dance floor and an ample buffet.

The Crown Odyssey has a swimming pool on her 1st deck, as well as a fitness center, two saunas, two massage rooms, ample sun deck space and a beauty palour. She also has two whirlpools located on the Penthouse Deck (10th deck).

The Crown Odyssey will first undertake routes between England and the Baltic Sea and then will be put into worldwide service.

For free literature on the shipbuilding services offered by Meyer Werft, Circle 56 on Reader Service Card 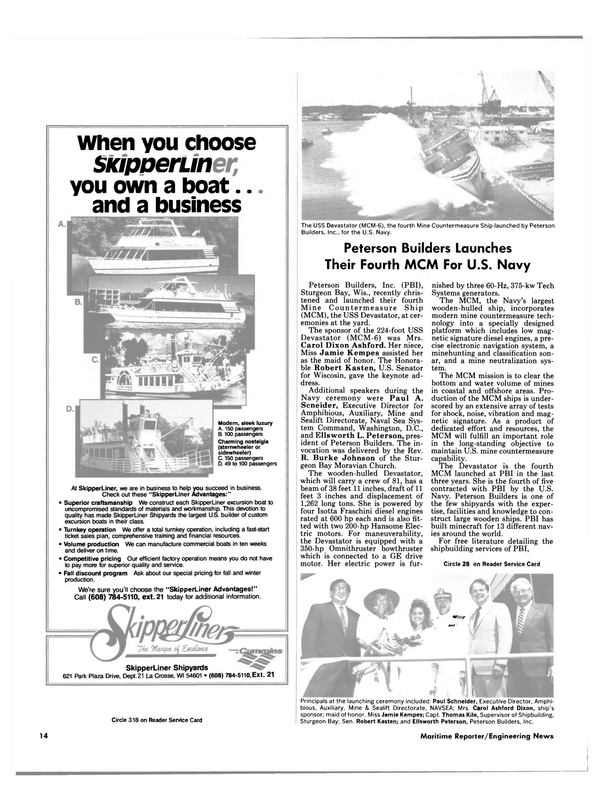