With U.S. shipyards busy building and converting a number of passenger vessels, cruise boats and ferries, the editors of MR/EN have put together a feature on 10 of the most notable shallow-draft passenger vessels delivered in the past year, which include nine newbuildings and one conversion.

The M/V Annabel Lee, which will cruise on the James River out of Richmond, Va., is 108 feet long, has a beam of 34 feet, draft of 3 feet 9 inches and hull depth of 7 feet. She is powered by a pair of rebuilt GM8V-92 diesel engines rated at 310 hp each at 1,800 rpm furnished by Johnson's Diesel Service. Electrical power is provided by two 99-kw KATO generators driven by rebuilt GM6-71 diesel engines.

The Annabel Lee is carpeted and will feature live bands, dancing and full bar service, as well as be able to seat over 400 passengers for dinner.

Tom Hensley, owner and president of Service Marine Industries, Inc., called the Annabel Lee "a 90- day miracle," since that's how long the vessel took to construct.

The Catalina Flyer, which replaces the Catalina Holiday on the Newport-to-Catalina route for Catalina Passenger Service, is powered by two specially lightened 2,000-hp Caterpillar 3516 TA diesel engines coupled to Reintjes WVS-1023 2.538:1 reduction gears and fitted with Lips three-bladed Cunialbronze propellers. The Catalina Flyer's auxiliary power is supplied by two 40-kw generators driven by two John Deere engines. She has a beam of 40 feet and a draft of 8 feet.

According to Bob Black, manager of Catalina Passenger Service, an increasing demand for speed on the Catalina route prompted the order for the catamaran and he expected that, at her speed of 27 knots, the Catalina Flyer would cut travel time in half.

The 3,000-horsepower, twinscrew vessel, named the Eagle, is 233 feet long, with a 60-foot beam, loaded draft of 9 feet 9 inches and depth of 16 feet. She is also designed to also carry 70 automobiles or 37 automobiles and six 18-wheel trucks and has a displacement of 1,778 long tons. The ferry will provide service between Hyannis and the offshore islands of Martha's Vineyard and Nantucket.

The Eagle is propelled by two 1,500-hp GM 12-645E6A diesel engines and equipped with a Harbormaster bowthruster. She has a loaded speed of 12 knots. The Eagle is equipped with two Reintjes WAV 1830 reduction gears and two Coolidge propellers. Three 185-kw Caterpillar 3406BT diesel power generators supply the vessel's electrical power along with a 135-kw emergency generator, Caterpillar D- 3306BT.

The 85-foot excursion boat, with a beam of 26 feet, offers sightseeing luncheon or dinner tours on the Cape Fear River near Wilmington.

Decorated inside and out to resemble a vintage paddlewheeler, the Henrietta II's propulsion system is a pair of Cummins 6BT5.9 diesel engines, supplied by Cummins Mid- South, Jackson, Miss., which power hydraulic pumps that boost hydraulic pressure sufficiently to drive two hydraulic motors that turn a 16- foot-diameter split paddlewheel.

Each diesel engine develops 134 hp at 1,800 rpm. A pair of Newage 35- kw generators are also powered by the pair of Cummins engines. Both are keel cooled using Fernstrum equipment.

The hydraulic system was de- signed and installed by Skipper Hydraulic, Gretna, La.

The Henrietta II features an enclosed main deck cabin and a covered second deck. The pilothouse is elevated a few feet above the second deck to provide the pilot with excellent visibility.

The 101-foot-long Island Countess has a beam of 27 feet, a full load draft of 5 feet and a passenger capacity of 523. She is propelled by two 300-hp Detroit Diesel 8V92 diesel engines fitted to Michigan Wheel four-bladed bronze 34-inch-diameter propellers via Allison model MH reduction gears and has a speed of 12 knots.

In speaking about the Island Countess, Paul Quackenbush, president and owner of Empire Boat Tours, said, "We are very pleased with it and our customers are very pleased with it. Our luncheon and dinner cruise operations are soaring." The Island Countess, sister vessel of the Island Dutchess, was designed by Mr. Quackenbush and Jim Murray, president of Freeport Shipbuilding. She was custombuilt by Freeport Shipbuilding, which entered the boatbuilding business in April 1981.

Built by Gulf Craft, Inc., Patterson, La., the M/V Massachusetts has an overall length of 95 feet, beam of 28 feet and draft of 6 feet.

She is powered by four Detroit Diesel 12V71TI main engines and is fitted with Twin Disc reduction gears and four Columbian Bronze propellers and will cruise at speeds of about 22 knots. Her auxiliary power is provided by two Detroit Diesel 371 diesel engines and two KATO 30-kw generators.

According to Massachusetts Bay Lines president William Spence, the vessel is expected to provide water transportation service to hundreds of commuters from Hingham to Boston on a daily basis.

The "new generation" Massachusetts, which is constructed of aluminum, is fully heated and air conditioned on all her decks by Carrier air conditioning and heating systems.

She has a partially open upper deck forward and aft and is equipped with spacious booth seats and full handicapped access.

Besides commuter service, the Massachusetts, which is the sixth boat in the Massachusetts Bay Lines fleet, will be available for sightseeing and excursion cruises, as well as business meetings.

The conversion of the 149-passenger Maui Princess by Aluminum Boats involved the extension of the passenger compartment by 50 feet aft, the addition of all new seats, 7- 1/2 tons of air conditioning equipment and an open promendae deck for 100 passengers above the passenger cabin. She was converted from the 110-foot crewboat Sabine Pass. To provide easier access, sliding port and starboard cabin doors were installed. Also a total of 7 feet was added to the stern for a combination dive/swim and loading platform.

Because the converted boat has the multipurpose role of cruise vessel, ferry and freighter, airline-type seats were chosen and mounted on tracks for quick removal and conversion of the passenger cabin into a cargo bay. When carrying both passengers and cargo, the vessel can haul up to 10 tons of cargo. When in her all-cargo mode, the Maui Princess can haul up to 60 tons of cargo.

The 192-foot Spirit of Chicago, with a beam of 36 feet and loaded draft of 7 feet, is powered by a pair of Detroit Diesel 12V71TI diesel engines.

The vessel is operating on Lake Michigan from the Navy Pier and has three fully enclosed, carpeted, climate-controlled decks.

Circle 121 on Reader Service Card In addition, Richard D. O'Leary, president of Cruise International, recently announced plans to construct five more dinner/excursion vessels over the next two years. Contracts for the first two of these vessels have been awarded to Blount Marine.

The Yukon Queen, with an overall length of 64 feet, a beam of 17 feet and draft of 2 feet 9 inches, is designed to comfortably carry 49 passengers. Six-cylinder, four-cycle, turbocharged, aftercooled Triple Lugger L6140As, manufactured by Alaska Diesel Electric, rated for 550 hp at 2,100 rpm, and coupled to three Hamilton 1031 jets, power her to speeds of 30 knots. Aside from the main propulsion system, the engine compartment holds two auxiliary 8-kw Northern Lights diesel generators, six 8-D batteries for the 24-volt electrical system, and one battery for the 12-volt emergency electrical system. She will have a range of about 450 miles.

Designed to carry up to 300 cubic feet of luggage, the Yukon Queen operates on the Yukon River, from Dawson City to Eagle in Alaska. 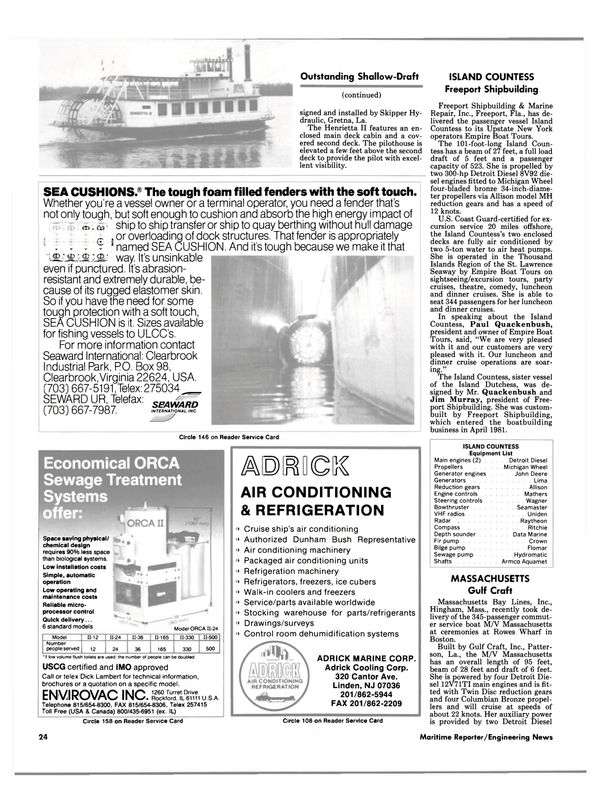