The Tennessee River Valley Association and Tennessee-Cumberland Waterways Council will hold their annual meetings at the same time.

As its convention theme, NWC announced that its program would focus on, "After Turbulent Times, Calmer Waters—Rebuilding River Valley Economies in a More Receptive Public Climate." NWC chairman Sheldon L.

Morgan, senior vice president of First Alabama Bank, said the program would include two luncheons and six panel discussions. Subjects will range from waterborne commerce trends and regional economic opportunities to the impacts of climatic changes on navigation and of "user-say" on Federal investment policy.

A dinner cruise aboard the M/V General Jackson, the Opryland Hotel's showboard, is also planned.

The Nashville meetings will begin on Wednesday afternoon, September 21, with registration.

The Tennessee River Valley Association will hold a general membership meeting, followed later in the afternoon by a board of directors' meeting. Presiding will be association president J. Richard Hommrich, president of Volunteer Barge & Transport, Inc.

Inland Rivers, Ports & Terminals, Inc., will hold a board meeting during the afternoon and a membership meeting the next morning. IRPT's chairman, C.W. Mitchener, executive director of the Yellow Creek State Inland Port Authority, will preside.

In the evening, there will be an opening reception in the Opryland Hotel.

The U.S. section of the Permanent International Association of Navigation Congresses (PIANC) will sponsor a breakfast session. The main speaker at the session will be Dr. Anatoly Hochstein, director of LSU's Ports and Waterways Institute.

He will discuss the modernization of the Chinese inland waterways system, which totals some 100,000 miles in length.

At 9 a.m., Mr. Morgan will gavel the NWC annual meeting into session, and Mr. Cook will deliver his annual report on the state of waterways industry.

Two panel discussions are scheduled during the morning, followed by the opening luncheon, which will be attended by the Tennessee River Valley Association and Tennessee- Cumberland Waterways Council members. This will be the final event on their portion of the annual meeting program.

During the afternoon, two additional panel discussions will be held.

An evening reception, dinner and entertainment will take place aboard the M/V General Jackson, which will leave the Opryland Hotel dock for a cruise down the Cumberland River to downtown Nashville before returning to the hotel. During the cruise, the National Rivers Hall of Fame, which is located in Dubuque, Iowa, will induct John Hartford, widely known songwriter and performer.

On Friday morning, September 23, the Arkansas Waterways Commission has scheduled a breakfast meeting, which will be presided over by commission chairman Ralph McDonald Jr.

Brig. Gen. Patrick J. Kelly, recently named as Director of Civil Works for the Army Corps of Engineers, will open the Friday morning program with a report on the current status of port and waterway programs and plans for future construction.

Following his presentation, there will be two additional panel discussion programs. A luncheon will be the final event on the meeting program.

Co-hosting the luncheon will be the Propeller Club of the Port of Nashville, the president of which is Glenn A. Hendon, vice president of Hunter Marine Transport, Inc. 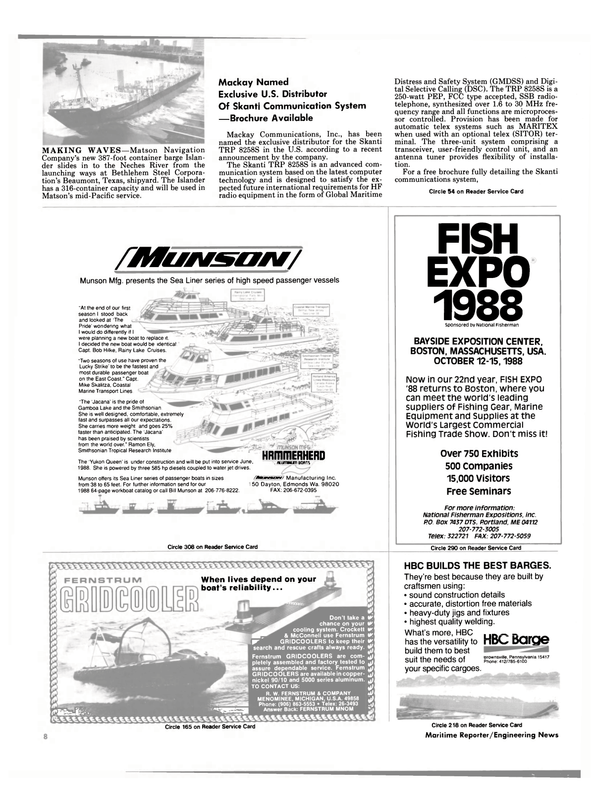