The Trinity Marine Group, New Orleans, La., has been awarded a contract to build a 110-foot harbor docking tug for Chevron U.S.A., Inc.

The new vessel will be a twinscrew, double rudder, diesel-powered tug, with Kort backing nozzles, but with the capability of ocean towing service.

They will drive two, four-bladed, 98-inch diameter stainless steel propellers through Reinjtes reverse/ reduction gears with a ratio of approximately 4.0:1. The propellers will be placed in two 99-inch diameter model 37 Kort nozzles recessed into the hull to minimize tending below the baseline.

The vessel will be equipped with a hydraulic steering system supplied by Engine Monitor, Inc., Harahan, La., and there will be two control stations, one in the pilothouse, and one aft on the second deck.

Electrical power will be provided by two 99-kw generators driven by two Detroit Dieel 6-71 engines. One of the generators will also serve a 1,000-gpm Elkhart fire monitor mounted atop the pilothouse. It will be supplied by two 1,500-gallon storage tanks. A USCG-approved Halon flooding system will protect the engine room and four fire stations will be located throughout the boat.

Towing will be provided by 23,000-pound pull and 18,000- pound pull McElroy capstans mounted forward and aft.

The main deck will have living quarters for six, a galley and mess facilities.

The tug, which will be under 200 gross registered tons, will be built at one of six Trinity Marine Group yards—Halter Marine, Inc., at Moss Point, Miss, and Lockport, La.; Moss Point Marine, Escatawpa, Miss.; Equitable Shipyards, Inc., at New Orleans, La. and Madisonville, La.; and Gretna Machine and Iron Works, Inc., Harvey, La. The Trinity Marine Group is owned by Dallas- based Trinity Industries. 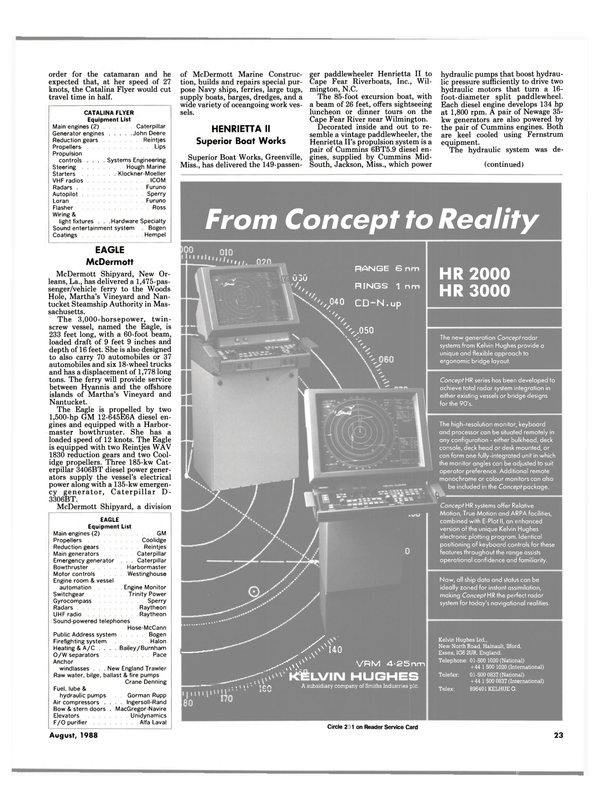