Additionally, KHD has also supplied engines for army and air forces. Some of the company's most recent success is built around two engine series—TBD 234 and TBD 604B.

The compact TBD 234 diesel engine series, which has an exceptional low weight to power ratio of 4.4 pounds/bhp, is available in six-, eight-, 12- and 16-cylinder " V " configurations, rated at up to 1,224 hp at 2,300 rpm. Each of a series of seven Spanish Customs Service patrol craft were fitted with a pair of TBD 234 V-12 diesel engines. Rated at 1,000 hp each, the engines directly drive Riva Calzoni waterjets to propel the 47-foot craft at speeds of about 54 knots. The engines' extremely low fuel consumption allows the vessels to operate for long periods of time and in a greater sea radius. The design of the engines also allows for simple servicing.

Deutz MWM also has begun the delivery of 24 self-contained generating sets of 850 kw each to the Canadian Navy for their new patrol frigates. Deutz MWM sold 32 sets of an almost identical configuration to the German Navy for use aboard their F-122 Bremen Class frigates.

The sets are installed with a doubleelastic mounting in soundproof containers.

The modules are arranged to allow easy transfer from the ship to base for overhaul. Deutz MWM designed the units to be shock-resistant, allowing the generator sets to continue to operate in extremely severe conditions.

The incorporated TBD 602 V-16 K engines are available in a second development stage as the 604B Series diesel engine. The engines cover a power range of up to 2,624 hp at 1,800 rpm for main propulsion. The engine features easy service accessibility to all running parts, even to the crankshaft and conrod assembly through the crankcase ports.

Both of these Deutz MWM engine series feature low fuel consumption— with ratios as low as .315 pounds/bhphr. This low fuel consumption allows for a substantial increase in a vessel's range while reducing its operating costs. Deutz MWM diesels have relatively high compression ratios for excellent low-load performance and are equipped with special low-load features to reduce smoke and other emissions.

Deutz MWM also offers the popular 628 Series engine, which has been selected to power several Canadian Coast Guard vessels and similar ships. The power range of these diesels covers up to 4,460 hp at 1,000 rpm. Larger engines rated at 9,860 hp at 600 rpm are available.

Deutz MWM engines have been used aboard several types of vessels, ranging from catamarans to frigates, patrol boats to high-performance passenger vessels. 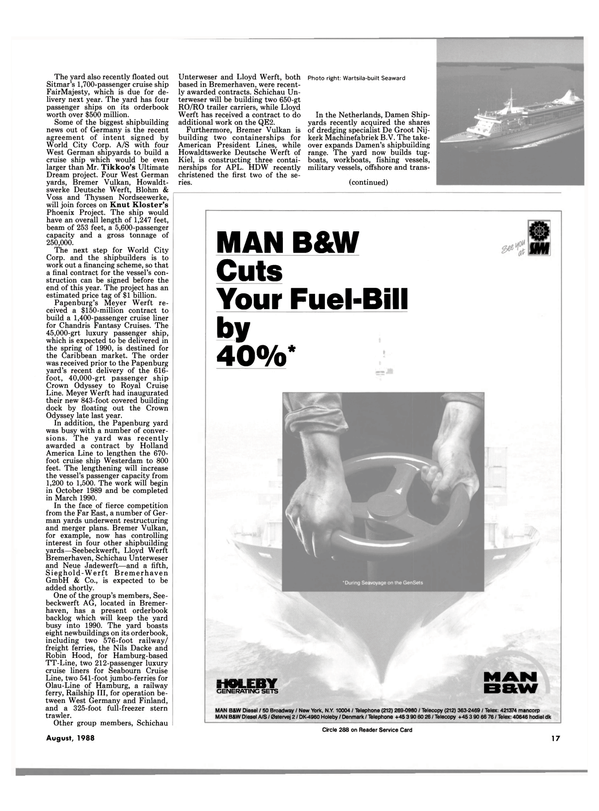