Signs Of Improvement As Passenger Ship Orders Rise Despite battling what the European Community termed "aggressive, irregular and unfair international competition" from the Far East, European shipyards showed signs of improvement during late 1987 and early 1988. A large part of Europe's improved showing can be traced to an increase in cruise ship orders, the resurgence of Spanish yards in the international market and Yugoslavia's continuing rise as a shipbuilding power in the world market.

Furthermore, several optimistic signs have raised the hopes of European shipbuilders. For example, freight rates soared during the past year, only about 3 percent of the world merchant fleet is idle and a large percentage of the aging world fleet will have to be replaced shortl y .

Estimates by Oslo-based shipbroker Fearnleys show that world shipbuilding orders will rise to between 25 million and 35 million tons over the next 10 years.

The Yards Spanish shipbuilding has shown a remarkable resurgence on the world market. For example, the Andalucia yards of the Spanish state-owned shipbuilder Astilleros Espanoles S.A. (AESA) are assured of work orders well into 1989, according to the company.

AESA's Sestao shipyard in Bilbao is constructing a 112,000-ton crude oil tanker for Knutsen OAS Shipping of Norway under a $32-million contract. A second vessel, a 12,000- ton product/chemical tanker, ordered by Knutsen from AESA will be built at the group's Juliana shipyard in Gijon. Both vessels are expected to be delivered in the second of 1989.

AESA has also signed a threeyear pact with two Cuban shipping companies to repair their fleets.

On top of the shipbuilding news in the U.K., is the possible construction of what would be the largest cruise ship in the world. The proposed 1,130-foot, 3,000-passenger luxury cruise ship would be built by Belfast-based Harland & Wolff.

The state-owned yard has signed a "heads of agreement" with Tikkoo Cruise Line for the construction of the 160,000-grt vessel, known as the Ultimate Dream. The deal rests upon a number of details, including the amount of British Government subsidies.

In the meantime, the British Government is hoping to sell Harland & Wolff. One of the parties interested in possibly purchasing the yard is Ravi Tikkoo, the man behind the Ultimate Dream project.

State-run British Shipbuilders recently sold its Glasgow-based Govan yard, which faced possible closure for lack of orders, to Kvaerner Industrier A/S of Norway for about $10.2 million. The new owners, who plan to restructure the yard, already have two LPG ship orders and an option for two more from the same owner.

British Shipbuilders' largest subsidiary at Sunderland, North East Shipbuilders Ltd., is busy with the construction of a series of 25 Superflex RO/RO passenger/vehicle ferries for Vognmands-Rudten (VR) Shipping of Denmark. The first two ferries of the series, the Superflex Alfa and the Superflex Bravo, are now in service. Construction of one of the ferries was subcontracted to the North Devon yard of Appledore Ferguson Shipbuilders.

In St. Nazaire, France, Alsthom's Chantiers de l'Atlantique yard received a $150-million order from Gotaas-Larsen's subsidiary Admiral Holdings Inc. for a 44,300-grt cruise ship. The vessel, which is expected to be delivered in the first half of 1990, will have a 2,000-passenger capacity.

The yard also recently floated out Sitmar's 1,700-passenger cruise ship FairMajesty, which is due for delivery next year. The yard has four passenger ships on its orderbook worth over $500 million.

Some of the biggest shipbuilding news out of Germany is the recent agreement of intent signed by World City Corp. A/S with four West German shipyards to build a cruise ship which would be even larger than Mr. Tikkoo's Ultimate Dream project. Four West German yards, Bremer Vulkan, Howaldtswerke Deutsche Werft, Blohm & Voss and Thyssen Nordseewerke, will join forces on Knut Kloster's Phoenix Project. The ship would have an overall length of 1,247 feet, beam of 253 feet, a 5,600-passenger capacity and a gross tonnage of 250,000.

The next step for World City Corp. and the shipbuilders is to work out a financing scheme, so that a final contract for the vessel's construction can be signed before the end of this year. The project has an estimated price tag of $1 billion.

Papenburg's Meyer Werft received a $150-million contract to build a 1,400-passenger cruise liner for Chandris Fantasy Cruises. The 45,000-grt luxury passenger ship, which is expected to be delivered in the spring of 1990, is destined for the Caribbean market. The order was received prior to the Papenburg yard's recent delivery of the 616- foot, 40,000-grt passenger ship Crown Odyssey to Royal Cruise Line. Meyer Werft had inaugurated their new 843-foot covered building dock by floating out the Crown Odyssey late last year.

In addition, the Papenburg yard was busy with a number of conversions.

The yard was recently awarded a contract by Holland America Line to lengthen the 670- foot cruise ship Westerdam to 800 feet. The lengthening will increase the vessel's passenger capacity from 1,200 to 1,500. The work will begin in October 1989 and be completed in March 1990.

One of the group's members, Seebeckwerft AG, located in Bremerhaven, has a present orderbook backlog which will keep the yard busy into 1990. The yard boasts eight newbuildings on its orderbook, including two 576-foot railway/ freight ferries, the Nils Dacke and Robin Hood, for Hamburg-based TT-Line, two 212-passenger luxury cruise liners for Seabourn Cruise Line, two 541-foot jumbo-ferries for Olau-Line of Hamburg, a railway ferry, Railship III, for operation between West Germany and Finland, and a 325-foot full-freezer stern trawler.

The yard recently delivered a CPT 54E advanced product tanker, the K/S Margretheholm and christened the the M/T Fredholm, which is being built for the Danish partnership K/S Frederiksholm. She is one of two product tankers on order at the yard.

Denmark's Lindoe Shipyard is busy with the construction of a series of nine containerships for Maersk Line. The yard has already delivered the first 3,500-TEU containership.

The Norwegian shipyard Mjellem & Karlsen received an order at the end of 1987 for the $15-million conversion of the U.S. ship Magnus Sea, which was used in the oil exploration market. The order called for the lengthening of the Magnus Sea by 40 feet and conversion into a fish processing vessel.

In addition, Ulstein Hatloe and Mjellem & Karlsen have teamed up with Brodrene Aa A/S to collaborate on a building program for the Royal Norwegian Navy. The three shipbuilding groups will construct 10 new catamaran-type minesweepers.

Finnish shipbuilder Wartsila Marine Industries Inc., which was formed by the merger of Wartsila's and Valmet's shipbuilding divisions, with yards at Turku and Helsinki, has one of the largest orderbooks in Europe. As of June 1,1988, Wartsila Marine had 30 vessels on order with deliveries scheduled into 1991.

Among the orders were three 70,000-grt, 2,500-passenger cruise ships for Carnival Cruise Lines; three passenger ships from the owners of Viking Line (two from Rederi AB Slite of Sweden and one from SF Line Ab of Aland; and two 50,000- grt luxury cruise ferries from Effoa and Johnson Line.

The Turku yard of Wartsila recently delivered the 709-foot Seaward to Norwegian Cruise Line, a unit of Kloster Cruise Ltd. The 1,800-passenger ship was christened in special ceremonies in Manhattan.

Wartsila has established itself as one of the world's leading designers and builders of luxury cruise ships.

Another Finnish builder, Rauma- Repola recently received an order for a 354-1/4-foot luxury liner for use in the Baltic, Mediterranean and Caribbean Seas. The luxury ship will carry about 300 passengers.

Rauma-Repola is also constructing the second of a series of three 588- foot fish factory ships for V/O Sudoimport.

In southern Europe, spurred by its low labor costs, advanced facilities and ability to build sophisticated vessels, Yugoslavia is now Europe's leading shipbuilder based on both output and order backlog. Dur- ing 1987, Yugoslavian yards had an output of 16 ships totaling 350,000 grt. This represented an increase of 117,000 grt over the 1986 deliveries.

According to the latest figures from Lloyd's Register Shipbuilding Returns, Yugoslavia has orders totaling 564,590 gross tons under construction and 601,000 gt not yet commenced, for a total orderbook of 1,165,590 gt—third in the world behind South Korea and Japan.

One of the major Yugoslavian yards, Brodosplit shipyard in Split, has received a contract from C.Y.

Tung for two 140,000-dwt tankers, which would be reportedly the largest ships ever built in the country.

The yard has four other tankers on order for a Norwegian owner. The Split yard also received an order from SF Line of Finland for two 37,500-grt superferries. The first of the new generation Baltic cruise ferries, the Amorella, has completed her final sea trials and is expected to be in service shortly. Her sister vessel should be delivered next spring.

The order represents an important step for Split in the passenger shipbuilding sector.

Last year, 3. Maj Shipyard, located at Rijeka, delivered the 83,000-dwt oil tanker/chemical carrier Panda to the East Asiatic Company of Denmark. The yard has orders for two more tankers of this type. Additionally, Teekay Shipping of Liberia has ordered two 111,000-dwt crude tankers, which are expected to be delivered at the end of 1988 and beginning of 1989.

In Italy, the Montefalcone yard of Fincantieri Cantieri Navali Italiani has begun the construction of the first of two cruise ships ordered by Sitmar Cruises. Each of the vessels will be designed to accommodate 1,950 passengers.

Last year, Fincantieri yards completed 10 merchant vessels (a total of 208,600 gt). Among the vessels completed was the Micoperi 7000, reportedly the largest and most powerful heavylift semisubmersible ship in the world. The Micoperi 7000 is a semisubmersible crane barge with two hulls, each with a length of 541 feet and beam of 108 feet, supporting a 574-foot by 285- foot platform. The ship has two swivel cranes that can lift 7,000 tons each.

The Genoa yard of Officine Mariotti has received a $118.8-million contract from Costa Cruises to convert a container vessel into a luxury cruise liner. Under the contract, the 15,932-grt containership Italia would be converted for use in the Mediterranean market. Upon delivery in April 1990, she will be renamed the Costa Marina.

Greece's two largest shipyards, Hellenic Shipyards at Scaramanga, and Eleusis Shipyards have been kept busy with a number of domestic naval orders. In addition, Hellenic is involved in discussions with the Soviet Union to build a series of six reefer vessels. Hellenic recently launched the third in a series of four reefer vessels it is building for the USSR. 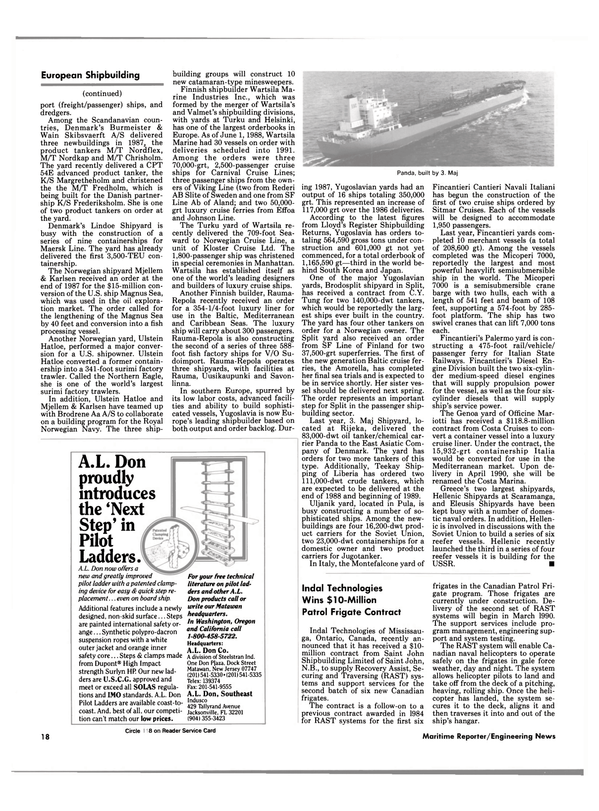