—Technical Paper A v a i l a b l e— Editor's Note: This article is based on a technical paper, "Reliable Economic Propulsion Systems With High Passenger Comfort," co-authored by R. Hafner, R. Gruhn and E. Gunther Kroos of Krupp MaK. The paper details the development of a flexible multi-engined propulsion system and the methods adopted to reduce structure-borne noise from the propulsion and auxiliary engines for the recently delivered Crown Odyssey.

The cruise ship's propulsion system features two controllable pitch propellers. Each CP propeller is driven by two engines, a primary and a secondary, which are termed "father and son," according to their size. The "sons" have one generator tailored to their capacity and are similar in output to the two auxiliary engines in the electrical system.

Additionally, they can be reduced through gearing to slow speed and can operate the CP propeller for silent running by themselves. There are two "fathers" (Krupp MaK 8M 601s) each with a capacity of 8,000 kw (10,728 hp), two "sons" (Krupp MaK 6 M35s) with a propulsion capacity of 2,650 kw (3,554 hp), and two generator engines (6 M35s) which are independent of the propulsion engine with a a capacity of 2,830 kw (3,795 hp). The gearing has two speed steps for the small engine, from 720 rpm to 90 rpm for silent running, and from 720 rpm to 130 rpm for maximum speed, together with the "father." The "son" has two clutches for the respective gear steps, and another to disengage and engage the "father" with the gearing system.

At slow speed, the "son" slowly drives the revolving CP propeller through the gear transmission.

In addition to a clear arrangement, the control of the system is simplified because no load is shifted from one engine to the other, except in the cruising mode.

Either the "father" engine or the "son" engine has all the capacity or the capacity is distributed between the engines in proportion to their nominal capacity.

The speed step of the "son" is necessary to enable it to drive the heavy propeller alone, in spite of its low capacity and this also benefits the speed requirements mentioned earlier.

Resilient Mounting Of Engines Passenger vessels, such as the Crown Odyssey, require a high level of comfort. Therefore, the structure- borne noise of propulsion engines has to be isolated from the ship's hull. Elastic mounting of the engines offers an excellent solution to the problem of structure-borne noise.

Resilient mounting of ship diesel engines is not a new technique.

However, there is a difference between the direct elastic installation of main propulsion engines and the mounting of aggregates where engine and generator are placed on a common frame and the spring elements are arranged beneath the base frame. Aggregates have an advantage in that they do not reflect the torque, relative to the elastic mounting, to the outside. The engine transmits its torque through the shaft connection to the generator.

Engine and generator support themselves on the same frame and generate an opposed reaction momentum which arrives at the frame as torsion and closes the circle of torsional momentum. The base frame therefore receives a certain torsion in the area between engine and generator.

With rigid design and prevention of resonances, this can be well controlled and negligible reactions will be generated at the ship's foundation beneath the spring elements.

Furthermore, aggregates generally run at a constant speed, which makes the design considerably easier. Finally, the higher spring-supported weight around the base frame, in contrast to direct mounting, is of considerable advantage.

The elastic mountings used aboard the Crown Odyssey were specially developed by Krupp MaK for the 140-ton 8 M601 engine. The mountings provide excellent vibration and structure-borne noise insulation for the ship, while maintaining safe vibration levels for the engines and propulsion system. In addition, the elastic mountings reduce strain on the engine frame and bed plate; limit engine motion due to heavy seas; and provide relatively easy cost-effective installation and maintenance.

It can be concluded that reliable engines can be adapted to meet the special requirements of passenger ships. The installation of several medium-speed engines, together with reduction gears and controllable pitch propellers, as in the case of the Crown Odyssey, provide for high efficiency, high reliability and quiet operation.

For a free copy of the complete technical paper, "Reliable Econom Economic Propulsion Systems With High Passenger Comfort," along with brochures and literature detailing the full line of diesel engines offered by Krupp MaK, Circle 47 on Reader Service Card 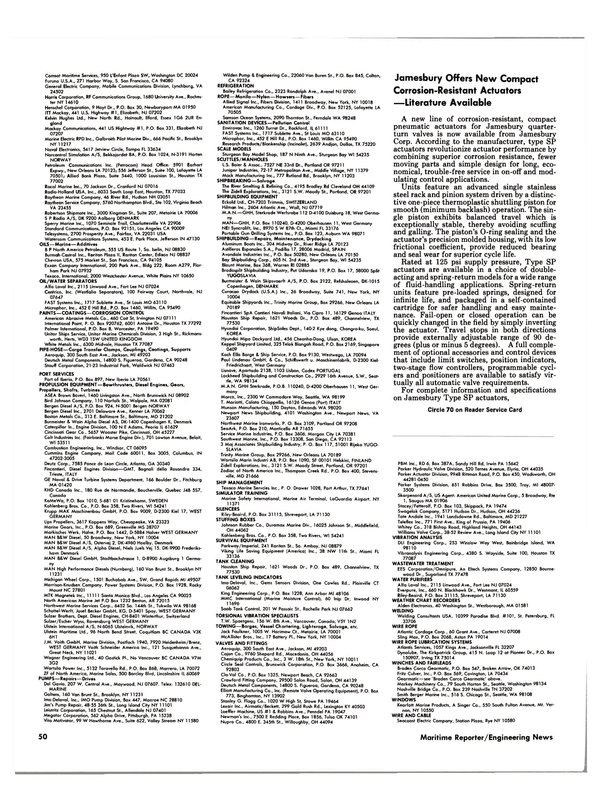