*Editor's Note: A veteran of more than 25 years' experience in sales, marketing and general management in both the consumer packaged goods and transportation industries, Mr. Godsman has been president of CLIA since October 1985. He has been instrumental in increasing the visibility of both CLIA and the cruise product.

The cruise industry is one of the fastest growing sectors of the travel industry. Since 1970, when an estimated 500,000 people took cruises, cruise passenger travel has increased 600 percent, with more than 3 million people taking a cruise in 1987.

This growth has led to the cruise industry contributing over $1.2 billion annually to the U.S. economy in direct purchase of goods and services.

In addition, the North American cruise industry's growth is also reflected in the significant increase in capacity and passenger berths, with about 35-40 new ships having been built or planned during this decade.

Estimates project that cruise lines will spend more than $3 billion on shipbuilding before 1990.

The New York-headquartered Cruise Lines International Association (CLIA), a marketing-promotional trade organization comprised of 35 of the major cruise lines serving North America, believes that the 1980s "will go down in history as the most prolific in a generation—and perhaps of this century—for new passenger ship introductions." In 1988, 10 new cruise ships with a total of more than 8,000 berths will have been launched. This year should see at least a half dozen new launchings with an additional 7,600 berths.

CLIA reports that 1988 should see a 1 percent increase in passenger totals from 3 million in 1987 to 3.5 million in 1988. The association estimates that passenger travel has been growing at a rate of 11 to 14 percent per year throughout the 1980s.

Although there has been a significant increase in cruise passenger travel during 1980s, recent research indicates that there is still substantial room for growth. The research indicates that because of lingering misconceptions about the cost of cruise travel and old travel habits, potential consumers still might be wary of taking their first cruise.

While roughly 5 percent of the population has taken a cruise, CLIA has targeted its promotional efforts at the enormous body of potential first-time cruisers.

According to a study conducted by the research firm Market Scope Inc. for CLIA, almost 75 percent of the 35 million people identified as "cruise prospects" are favorably disposed toward taking a cruise vacation but simply have not gotten around to it.

The research indicates that only one of eight has a specific concern or "hasn't considered a cruise vacation seriously enough to take a position." Over 50 percent of the prospects rated a cruise vacation higher than other vacations because of its particular advantages.

The Market Scope study showed that the cruise industry has done an excellent job of promoting most of the primary benefits of cruise vacationing and has certainly overcome the traditional barriers to trying a cruise vacation.

This has been accomplished by such means as heavy advertising, public relations, direct marketing and the support of CLIA. But there are still several areas that need further emphasis.

According to research, the major obstacles to attracting the first-time cruiser are the (1) misconception that cruise vacations are too expensive and (2) vacation inertia.

The important factor is that the price includes all meals, entertainment, a wide choice of activities and free or sharply reduced airfare.

When one takes all these into account, it demonstrates the great value of a cruise vacation.

As for the problem of inertia—the reluctance to try a cruise vacation— the cruise industry should be heartened by the law of physics.

Once inertia is overcome, a body in motion tends to remain in motion.

Similarly, once a person tries a cruise vacation, he or she tends to take another one.

The study disclosed that those most likely to take a cruise are slightly more affluent (a median income of $45,000) and younger (a mean of 36.9 years) than other groups. About 45 percent are single, and 16 percent are single parents.

Most cruise lines offer fares tailored for singles who travel by themselves or with friends. Some cruise lines also offer special plans for single parents.

Aggressive marketing efforts will bring some 10 million first-time cruisers into the marketplace by 1993, and with the heavy traditional repeat factor for cruises, this indicates a bright future for the cruise shipping industry. 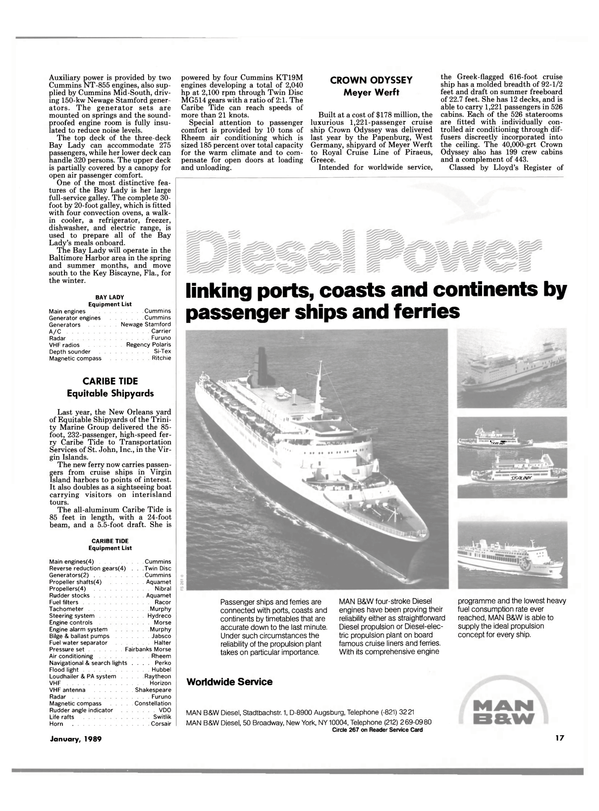