Rope, one of the oldest tools known to man, is also one of the most versatile tools available to man, but only in the hands of a professional user. In the hands of a novice, rope becomes a single purpose item, misused more often than used effectively. The objective of this article is to address the causes behind the misuse of rope by the professional—misuse that in many instances results in serious accidents— misuse that is all too frequent to be purely accidental—misuse that is all too common to be ignored.

As a salesman of rope for close to 40 years, I"m convinced that the misuse of rope by the professional can be traced in large measure to confusion in the interpretation of information provided by the manufacturer on breaking strength, tensile strength and work load for individual ropes. Comparing information published by two reputable rope manufacturers can be like comparing apples to oranges unless identical test procedures are used, which is not always the case.

Three-strand tests are performed with eye splices made with a specified number of tucks (a method of splicing) in the specimen being tested, with predetermined variables including lengths and the specific rate of load or strain level to be applied.

The eye-spliced ends are placed over a drum or bollard head on the testing machine. The rope specimen is then subjected to an even strain as the drums or bollard heads are separated by mechanical means.

Ropes that cannot be eye-spliced, such as braids, are covered by Federal Test Method Standard 191, Method 6016. In this test, the rope is wrapped around a drum and held by clamps as mechanical strain is applied. It is at this point that a manufacturer's published data on breaking/tensile strength can become confusing or misleading.

Rope, in use, must be tied, fastened or spliced in some manner, and in every case the knot, splice or bend then becomes the weakest place in the rope—the point where the breaking/tensile strength is at its lowest. Therefore, if the "test" used does not employ a "weak point," i.e.—jointure, knot or splice, the published result is not a true example of how the rope will perform in service.

Listed below are some of the more common variables, as well as mention of factors that may cause wide variation in test results.

1. A manufacturer may conduct numerous tests, but publish only the test that shows the highest strength. Reputable companies will conduct multiple tests, and their advertised strength will be an average of the highest and lowest break or tensile strength.

2. Some manufacturers, in an effort to straddle issues of strength, will distort data with a variance to the published strength, i.e.—+ /- 5 percent or +/-10 percent.

3. Another variable the consumer must be aware of is the actual point testing from which a determination is made as to rope failure, i.e—the point where the rope breaks in two, or one-strand breaks. The company with high integrity will established rope failure at the point where one strand breaks, which is also the point that the rope ceases to be a safe, usable tool. It is possible to continue test procedure with two remaining strands intact to obtain higher readings.

4. Factors such as conditioning of rope before testing, i.e.—temperature and humidity control, whether the rope is wet, or dry, are variables that can influence test results.

5. The consumer should always be aware that all nylons, polyesters and polypropylenes are not the same.

One major synthetic fiber producer markets over 40 grades of nylon and 75 grades of polyester. The qualities or raw material vary from manufacturer to manufacturer, application to application.

6. A sixth variable is rope construction.

Normal stated figures are on regular or standard construction.

Ropes with a loose twist or softer construction will be lighter and stronger than ropes with harder twists, but will not wear as well and resist abrasion as well. When in doubt as to the construction qualities of the rope he is buying, the consumer should determine the exact requirements needed for the rope he will use and then make sure that the manufacturers published specifications meet that need.

7. A final variable is that the buyer should understand that a manufacturer published breaking strengths/tensile strengths are based on new rope specimens only.

Once a rope is used those strengths are not reliable.

Working loads are stated, in a majority of cases as a percentage of breaking/tensile strength, i.e.—5 to 1 or 20 percent, 10 to 1 or 10 percent.

More and more often in today's markets, the manufacturer will not publish working load figures and percentages unless he knows and understands the exact requirements of the job to be done. Without all the facts, working load estimates are often an exercise in futility.

In closing, I would like to caution the buyer and user of ropes to know his supplier, or his supplier's source.

I'm proud to be able to state that my company, Columbian Rope Company, had never resorted to distorted or questionable specifications. I believe the same can be said about the majority of U.S. rope manufacturers, large and small.

But let the buyer beware, there are manufacturers who do not test their ropes, and simply use competitors data for their own purposes. It boils down to one simple fact. When purchasing rope, a reputation for quality, a history of product integrity and a record of standing behind its products and the dealers who sell them are the buyer's main safeguard against false statistics and shoddy merchandise. 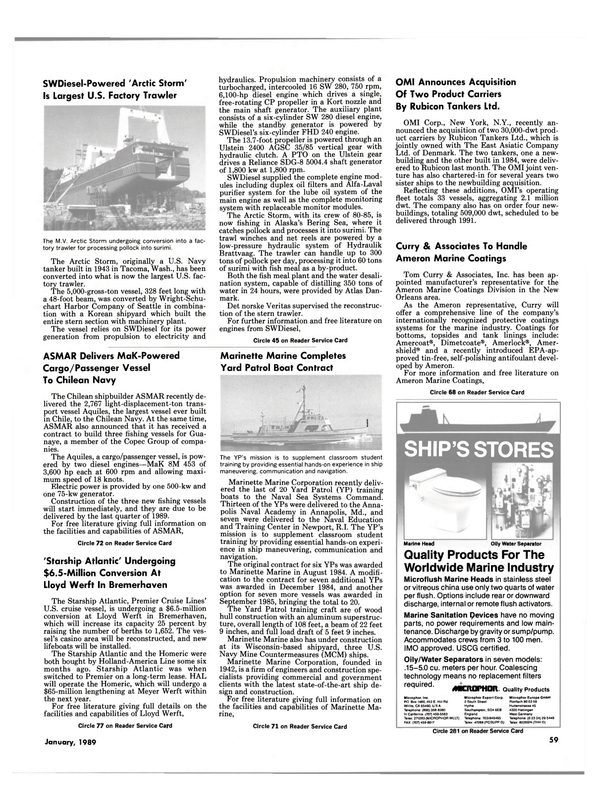