The U.S. Navy's "Cruiser Modernization" program will extend the service life and enhance the combat capability of 22 of the Navy's 27 multimission AEGIS cruisers (CG-52 through CG-73).

The program extends the service life of each ship to 35 years. Combat systems will be upgraded while crew size and maintenance requirements will be reduced.

The program ensures the availability of air defense cruisers to support fleet operations until the new CG (X) cruiser joins the fleet in 2018.

surface fires support and littoral undersea warfare capabilities. "We protect the force. We provide assured access anywhere, anytime. And we project power over land," said Rear Adm. Harry Ulrich, the Director of Surface Warfare. "To do this, we must focus on readiness, recapitalization and revolutionary systems." "The various upgrades to the cruisers will ensure increased combat power throughout their service lives. Our analysis was modeled to pace the threat through 2025," said Cmdr. Dave Matawitz. branch head for Current Ships in the Navy's Surface Warfare directorate.

Cruiser modernization will provide both a computing technology and force structure bridge to future ships.

George (CG-71), with the work commencing in FY 06. The final ship will begin modernization in FY 14.

The first five ships in the class, known as Baseline 1. did not receive the vertical launch system upgrade and will not receive the modernization. The lead ship of the class, USS Ticonderoga, is now 20 years old, and will be decommissioned next year. USS Thomas S.

The remaining baseline 2, 3 and 4 cruisers have varying capabilities. The cruiser modernization program will result in all remaining 22 ships having a common warfighting baseline.

With the new gun, these cruisers will possess a longrange land-attack capability. The rocket assisted ERGM rounds can reach targets up to 60 nautical miles away with precision accuracy.

These modifications will enhance the ship's relevance in the areas of air dominance, land attack, and anti-submarine warfare and will improve force protection in the littoral warfare mission.

"This program will allow us to work smarter and to incorporate advances in systems technology as well as to reduce future manning requirements," Matawitz said.

Cruiser Modernization will enhance the operational survivability of the class and will decrease maintenance costs by incorporating a number of HM&E ship alterations and type commander proposals.

"There will be significant weight reduction to improve ship stability and to enable growth for the ships additional service life," said Lt. Cmdr. Eric Weilenman, a requirements officer in the Current Ships branch. "Hull and deckhouse strengthening modifications will address emerging problems associated with cracks caused by metal fatigue." In all. the Cruiser Modernization program is critical to sustain surface combatant force structure and will provide a cost effective bridge to the introduction of our future family of ships - including CG(X) in 2018. Modernization of the 22 ships will be completed by the year 2015.

A key component in the codernization effort will be the adoption of "commercial- off-the-shelf" computer systems.

"The introduction of a COTS based computing environment, moving away from baseline legacy systems and toward Open Architecture," Matawitz said.

Cruiser codernization is necessary to maintain force structure until such time as the CG(X) is introduced. Navy policy currently sets the effective service life (ESL) of cruisers at 35 years for force structure planning purposes and ship design specifications. In actuality, the historical service life (HSL) of cruisers has been less as threat advances in technology while the ship's warfighting capability and hull, mechanical and electrical (HM&E) systems degrade.

Consequently, the cost to operate and maintain the ship increases as its ability to meet the future threat decreases.

"The decision to extend or accelerate the decommissioning of a ship class is thus based on the affordability of the platform in relation to the warfighting capabilities that platform brings to the fleet," Weilenman said. Without cruiser codernization, the Navy would likely be forced to decommission the class before it could introduce sufficient numbers of new ships to meet the developing threat.

Navy's future fleet of surface combatants will be a family of ships that will include the multi-mission DD(X) destroyer and the follow-on CG(X) cruiser, as well as the focused-mission Littoral Combat Ship (LCS). The Navy's Arleigh Burke-class (DDG-51) AEGIS guided-missile destroyers will also be undergoing a mid-life upgrade and are also a vital part of this future fleet. "Cruiser codernization will extend the life of the remaining cruisers well into the 21st century, and provide the capability bridge to our future family of surface combatants," said Captain Ray Spicer, director of surface ships for the Surface Warfare branch of the Navy Staff.

Lundquist is Communications Director, Center for Security Strategies and Operations, Anteon Corporation. He is a retired U.S. Navy captain.

This article was originally published in and is reprinted with permission of National Defense. 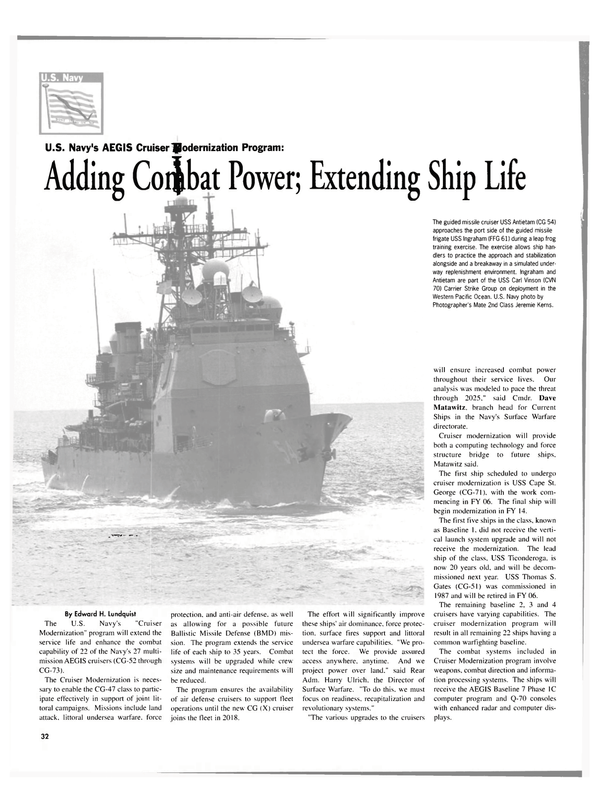