Novatug completed trials of a winchbased Carrousel system and launched a new Compact Carrousel tug design. The Carrousel system is designed to enable the towing wire to rotate 360 degrees around the tug, improving braking and steering power while reducing costs.

The winch-based system introduces further flexibility, allowing tow lines up to 60m in length to be handled with proto- type, and greater lengths with a larger winch in production models.

"The new tug design and the ability to use the Carrousel system with a towing winch now open up the possibility of substantially reducing operating costs of harbor tugs while enhancing safety and efficiency," said Novatug's commercial manager Walter Jacquet. "We have had fantastic results using the winch version of the Carrousel on our test tug, Multratug 12, which has completed over 30 live operations with the winch, and over 300 with the hook version. We are already getting commitments to build the new tug." Novatug's Compact Carrousel Tug design is a 27 m harbor tug with bollard pull up to 100 tons, equipped with twin nozzled propellers and flapped rudders.

According to Jacquet, conversion of existing tugs to take the Carrousel system is straight forward, and Novatug is offering a larger 35 m 120 ton bollard pull escort tug design in addition to its new compact design. "We have already had a commitment from two major North European tug operators to build one of the escort tugs, and one of the compact vessels," he said. 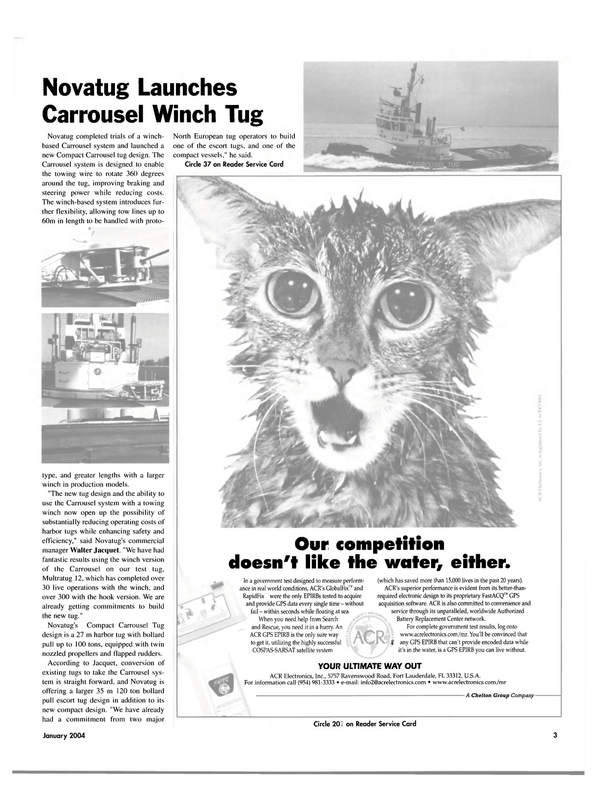