The marine electronics world lost a pioneer with the passing of Willy Simonsen on December 4, 2003.

Simonsen, who was 90 years old, was the co-founder and driving force behind Simrad, a company that is today part of the Kongsberg Group, the world's largest manufacturer of marine electronics.

It was in 1947 in postwar Norway that Simonsen joined with John Mustad (of Mustad fishhook fame) to form Simonsen Radio AS in Oslo, Norway.

In the beginning, the partners focused on manufacturing high quality radio telephones.

Within a few years, the company expanded into development and production of echo sounders and sonars for commercial and military use, gaining a worldwide reputation for quality and superior technology.

Ground Broken on "World's Largest" Shipyard China State Shipbuilding Corp. has broken ground on what it says will be the world's biggest shipyard, a high-tech facility capable of producing cruise ships and natural gas tankers. The yard, being built on an island at the mouth of the Yangtze river, will reportedly eature seven construction docks along a fivemile stretch of coastline, the Shanghai Daily reported. Due for completion in 2015, the yard will be designed to produce a total of 12 million dwt of ships per year. The new yard is being built by the China State Shipbuilding Corp., which incorporates 25 large- and medium- sized shipyards.

Van Solingen will be responsible for both GE's marine and stationary power products.

Farstad Wins 5-Year Deals for PSVs Farstad Shipping has been awarded two five year contracts by Esso In 1957, the company opened an office in Horten, Norway and officially changed its name to Simrad, a combination of Simonsen and Radio. Simonsen headed the company he helped form for 21 years, leaving in 1968. He had grown his company from a handful of men into a world-leading manufacturer with 500 people (today the Kongsberg Group employs more than 4,000 worldwide).

Looking back at Simonsen's life, it is interesting to see how his talents - and unfolding world events — combined to make him a seminal figure in marine electronics.As a scientist in Bergen when World War II came to Norway, Simonsen became actively involved in the underground resistance. He spearheaded a project to eavesdrop on German telephone communications between Oslo and Bergen and provide Australia for the provision of two dynamic positioning platform supply vessels (Far Scandia and Lady Kari- Ann) to support Esso's production operations in Bass Strait, Australia. The contract turnover is approx. NOK350 million and is scheduled to start in mid January upon the delivery of the Far Scandia to Esso's Barry Beach Marine Terminal.

He was arrested by the Gestapo in 1941, and was later moved to a hospital after intentionally swallowing a "sickness pill." Simonsen was rescued from the hospital by Norwegians wearing German military uniforms, and after escaping to England he worked in the Radio Production Unit of the British War Office. It was here that Simonsen developed a tiny shortwave radio receiver - dubbed the "Sweetheart" - of which 50,000 were built and distributed to resistance forces around the world.By providing a communications link between scattered international resistance forces, Simonsen helped win the information war and turn the tide in favor of the allies.

"Willy Simonsen was more than a delivery in 2006 and 2007 respectively.

The vessels will have capacity to carry some 6,100 cars and Seven similar vessels are now ordered from Daewoo. The first five vessels are scheduled for delivery in 2004 and 2005. The contract includes options for further vessels Brostrom Sells Chem Tankers Brostrom sold the three 5,750-dwt chemical tankers - Bro Nadja, Bro Nelly and Bro Nora - to Wonsild & Son of Copenhagen, Denmark. The three sister vessels were built in 1996 and 1997 with stainless steel tanks primarily designed marine electronics legend, he was a hero who used his communications skills to protect others at great risk to himself," said John Caballero, Vice President of U.S. subsidiary Simrad, Inc. "He will be missed by the entire industry." for transporting chemicals. The sale gives Brostrom a profit of about SEK 30 million and a cash surplus of about SEK 80 million.

Historic Milestone for MAN B&W MAN B&W Diesel A/S engine orders reached the historical output figure of 100,000,000 kW with the company's range of low speed two-stroke MC engines. About 8,000 MC engines have been ordered or delivered to customers all over the world since the first MC engine, a 6L35MC, was built in Japan by Makita (a sub-licensee of Mitsui) in 1982. Executive Vice President, MAN B&W Diesel A/S, Peter Sunn Pedersen, said: "Our MC range of engines has again underlined its powerful position as the most successful two-stroke low speed engine series ever produced. An unsurpassed engineering success proved by the accumulated output of more than 100,000,000 kW. It is indeed a milestone. We are very grateful for the support of our customers who made this achievement possible." Today, the engines are built in Denmark and by the family of MAN B&W licensees worldwide. The design of the MC range has been continually developed and refined to meet the needs of the market and strict environmental regulations. These engines power all types of vessels, from large oceangoing container ships to smaller local coastal vessels. The MC engine range encompasses 26 marine engines, ranging from the 4S26MC through to the world's most powerful diesel engine, the 14K98MC. with an output of 80,080 kW.

Denmark, for installation in four 3.700 TEU L-class container ships building there for the Danish group A.P. M0ller - Maersk. Safmarine and Deutsche Afrika Linien. The ships are due for delivery in 2004 and 2()05The first Sulzer RT-flex96C engines were ordered in April 2003. The eight-cylinder engines will each develop 45.760 kW (62.240 bhp) at 102 rpm. The engines will be built under license from Wartsila Corporation by HSD Engine Co. Ltd. in Korea. This is the second series of Sulzer RT-flex engines contracted by A.P. M0ller - Maersk group companies. The largest RT-flex engines have proved to be most popular, with 29 RT-tlex96C engines currently on order, in seven-, eight-. 10- and 12-cylinder configurations. In addition, there are 15 Sulzer RT-flex60C engines and nine Sulzer RT-flex58T-B engines, bringing the grand total of RT-flex engines as confirmed orders or already delivered to 53 with a aggregate power of 2.0 million kW (2.7 million bhp).

Circle 7 on Reader Service Card Firefighting Technology in Demand Required by SOLAS and for all existing and new build ships, the PFA -95 Portable Foam Applicator is connected to any shipboard fire hose and provides instant A-FFF foam for duration of 5.5 minutes. The fire fighter can switch from salt water to foam anytime thereby, cooling bulkheads before entering confined spaces or areas to extinguish Class A & B fire. IMSSCO Inc. has received multitude awards, not only from the commercial ship owners and operators but also US Navy. 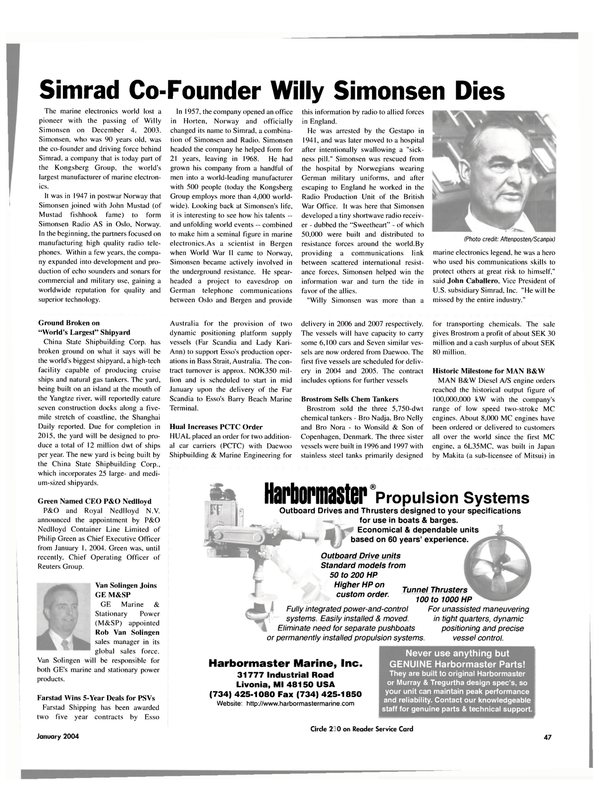