Although it has diversified into other vessel types in recent years. Western Australian based shipbuilding group Austal still counts fast ferries as a core market.

The last year has been no exception.

with the biggest news being the June announcement of an order for what will be the world's largest high-speed multi- hull vessel. Even more significant than the vessel's 126.7 m length overall is the fact that the cargo-vehicle-passenger ferry will be based on slender stabilized monohull hullform (more commonly referred to as a trimaran).

While the experienced high-speed builder from down under touts the commercial value of the project, ramifications for its military aspirations, particularly with the U.S. armed forces, are clear.

"We expect this breakthrough project to generate considerable interest among ferry operators and it clearly demonstrates Austal's ability to produce highspeed ships of the size currently being sought by the U.S. military," said Austal's Managing Director. Bob McKinnon.

The reference relates in particular to Austal's involvement in the USN's Littoral Combat Ship (LCS). Austal is providing its expertise in the design and construction of aluminium ships to the Bath Iron Works (General Dynamics) team that was awarded one of three design contracts for the LCS project.

With power provided by four MTU 20V 8000 diesel engines driving three Kamewa waterjets, the Auto Express 126 trimaran will be able to maintain a service speed in excess of 40 knots and provides the capacity to carry 1,350 passengers, over 340 cars and a substantial number of trucks. At the same time, the seakeeping performance of the trimaran is designed to provide passengers with a high comfort level.

"The characteristics of this new vessel, with a length of 126.7 m and beam of 30 m, will improve overall efficiency in terms of passenger capacity, deadweight and freight lane metres by more than 35%. At the same time passenger comfort will increase by 25% to 40% depending on the routes we operate." said Fred Olsen Jr., the company's Executive Chairman.

The Spanish company took delivery of its first Austal-built fast ferry last September in the form of the 66 m catamaran Bocayna Express.

Austal's next vehicle ferry deliveries include a 56 m catamaran for Tahiti that is configured to carry 700 passengers and 30 cars and the company's seventh Auto Express 86 catamaran. This vessel is particularly significant for Austal Ships as it is the company's first sale into the North American market. Built for U.S. company Canadian American Transportation Systems (CATS), the ferry will operate across Lake Ontario at well over 40 knots, linking Rochester.

With two passenger decks housing 774 passengers and space for some 238 cars.

Spirit of Ontario will enter the Great Lakes system as soon as the St.

Lawrence Seaway re-opens. It will not be the only Austal ferry passing through during the course of 2004. as Austal USA, the company's Mobile, AL shipyard, is currently building a 58 m vehicle- passenger catamaran for Lake Express LLC. This is scheduled to begin operations across Lake Michigan by this summer.

With capacity for 253 passengers and 46 cars, the Auto Express 58 is designed for a speed of 34 knots, and is the largest vessel built at Austal USA to date. The yard has previously completed two passenger- only high speed catamarans, two dinner cruise vessels and a pair of fast crew/supply boats.

Interestingly, there is already an Austal vehicle-passenger catamaran flagged to the United States registry — the Theatre Support Vessel WestPac Express.

Having already completed over two years of service supporting the operations of the U.S. Marine Corps' Third Marine Expeditionary Force (III MEF) in the Western Pacific theatre, during 2003 the 101 m catamaran achieved the distinction of becoming the first large high speed vessel to be registered and flagged as a commercial ship in the U.S.

Capable of sustaining loaded speeds of 36 knots, the diesel-powered ship can deploy a complete battalion of 970 Marines and up to 550 tons of vehicles and equipment in a single lift. WestPac Express has covered 150,000 nautical miles in two years, many of them open sea passages in challenging sea conditions, and yet lost only four hours operation to technical delays.

Austal Ships is also currently involved in other defence related projects, including the construction of three 22 m Coast Guard vessels for Kuwait and a fleet of ten 37.5 m naval patrol boats for another Middle East nation. 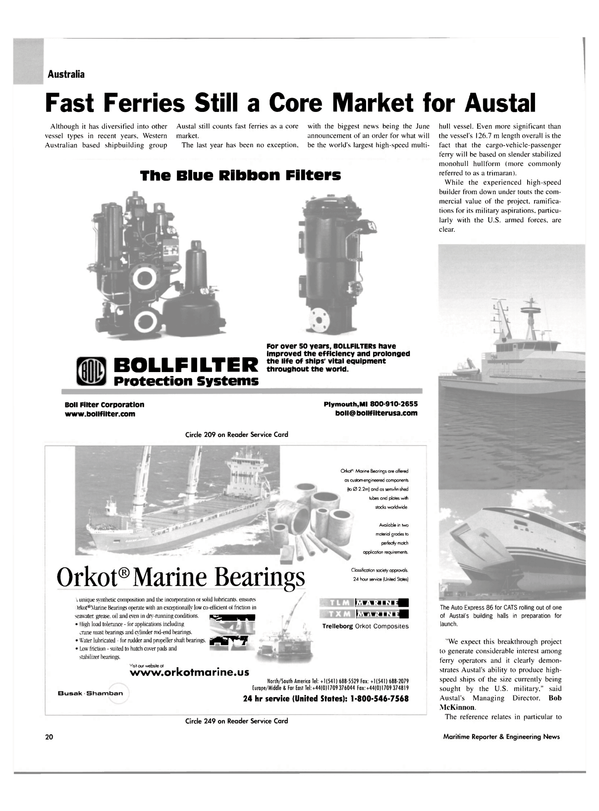