Although not one of the original goals, a result of the conversion was a vessel that can maintain station for at least 30 minutes during a complete blackout.

With the self-reliant thrusters used in this upgrade, said Keith Hebert. DP group operations supervisor, the Titan 2 will not drift during a 30-minute blackout.

The Titan 2 was self-propelled with two main Zdrives of 2,200 hp each, and two tunnel thrusters at 200 hp each. The Thrustmaster conversion added eight 1,000 hp hydraulic azimuthing thrusters and eight self contained Hydraulic Power Units (HPU's) to the heavy lift vessel. The conversion of the Titan 2 to a DNV class AUTR DP vessel began in mid 2001. Minimal modifications to the hull and existing shipboard systems reduced time to the February 2002 delivery. "We didn't have the added expense of dry docking and cutting into the hull to add the thrusters," Hebert said.

Since its delivery, the vessel has worked in the Bay of Campeche for Pemex, and in its first year of operation it logged over 6.000 hours with 100 percent availability.

The Bollinger Calcesieu Shipyard in Louisiana installed all of the DP equipment, Thrustmaster thrusters and deck-mounted Hydraulic Power Units.

Each thruster unit has a dedicated diesel engine powered Hydraulic Power Unit for propulsion and azimuthing. Although the DP system is sometimes considered as just the computer, the entire vessel should be considered a system. Most DP systems rely on the vessel power plant for power to the thrusters, so anything connected to the power plant can affect the system.

The Conversion Global Industries installed eight Thrustmaster Hydraulic Azimuthing units - six at the bow and two at the stern. The existing vessel controls were modified so the new DP system could control the original thrusters without affecting the original controls.

Although the existing tunnel thrusters interface to the DP system, the company anticipates using them only in extreme environmental or job conditions.

Bollinger installed a Kongsberg-Simrad SDP21 and a Kongsberg Norcontrol Monitoring and Alarm System on the vessel. The DP system provides inputs for two survey-supplied DGPS inputs and the existing ship's gyro. The system also includes two 3 KVA uninterruptible power supply (UPS) units, which provide up to 30 min. of battery-supplied power to the DP hardware.

The shipyard installed the containerized HPU's on the main deck near the associated thruster units. The HPU units, supplied by Thrustmaster, were complete and only needed to be secured to the main deck. Running the hydraulics from the containers to the thrusters by hose instead of stainless pipe shortened the delivery time by several weeks and saved 80'/r. Although not one of the major design goals, one of the biggest benefits of each thruster having its own self-contained power unit was the fact that the vessel could continue to maintain station after a total blackout of the ship's electrical plant. Except needing pressure to fill the fuel tanks occasionally, the new thrusters do not require the main power plant to operate.

Station-keeping during a blackout is limited to a half-hour because that is the capacity of the DP system UPS units with the current load. Additional power could be supplied to the UPS batteries to extend station-keeping capability indefinitely during a blackout. The Thruster package design avoids the need for accurate rpm control or coordination between multiple engines. Individual diesels take care of individual thrusters. Controls are simplified compared to a bussed diesel-electrical power plant.

A failure in a diesel engine or associated hydraulics cannot cause the loss of more than one thruster. 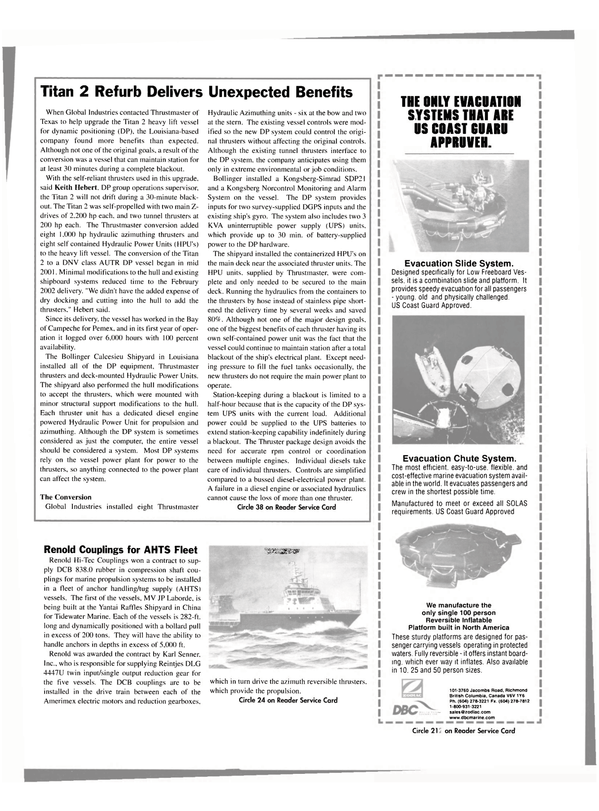