According to the USCG, oil spills have been reduced by roughly 90 percent since OPA90 was passed some 12 years ago. Encouraging, but statistics are often misleading. It would be a reasonable assumption that the oil that was spilled was a result of human error or equipment failure; not spilled intentionally.

On September 10, 2001 you could base the potential for spills on past incidents.

All that changed when we got our wake-up call the next morning. "9/11 showed us...the terrorists used our own infrastructure against us," says Admiral Vivien S. Crea. First Coast Guard District, Boston. We realize now that there are those who would benefit from intentionally spilling oil...and the more the better. OPA90 was not designed for this scenario. It's been over two years since 9/11 and domestically it's been quiet. The peaceful passing of time has an unfortunate way of lulling one back to sleep. But has the threat really gone away? They say 9/11 was planned as long as five years before it was carried out. "What happened with airplanes can also happen with ships, when you talk about passenger ships with over 2,000 people or a gas tanker, which is a floating bomb. It could destroy a whole city.

It is the same with oil tankers," warns Henri van Berlo of Bureau Veritas, Dubai. The new ISPS Code goes a long way in assessing and preventing terrorist incidents but does not address marine casualty response. The results of a terrorist incident would be the same as those OPA90 was created to avert: another catastrophic, environmental disaster...

in addition to the lives that would also be lost. Admiral Crea acknowledges that disruptions to our rigid waterways system are harder to overcome than the airlines. Protecting all 360 ports and the inland system at all times will be a daunting task. All it would take is one ship to sneak through.

There were more than 270 piracy attacks worldwide over the last 12 months; six in our very own Gulf area.

"While there is always room for improvement in the management and operation of ships, no amount of fresh regulatory action will eradicate the potential for another Prestige. The obvious counter, therefore, is to reinforce salvage cover in areas of the world that are heavily trafficked and environmentally sensitive," said Joop Timmermans. President, International Salvage Union. OPA90 accomplished the mission of its time but in this post- 9/11 era it has become inadequate. But there is new legislation on our drawing boards that would go a long way towards closing the gaps in OPA90. This new proposed rule, known as the Salvage and Marine Firefighting Requirements, will require pre-positioned salvage assets and the capability to quickly respond and contain worstcase maritime disasters. USCG has delayed the rule, and it's now more than a year since they closed the public comment period, citing the need for time to evaluate the enormous amount of comments.

The rule is good but difficult to accept by those who would end up footing the enormous bill. If protecting critical energy infrastructures is vital to Homeland Security, then sooner is better than later to pass this much needed reg- ulation. The time is right. 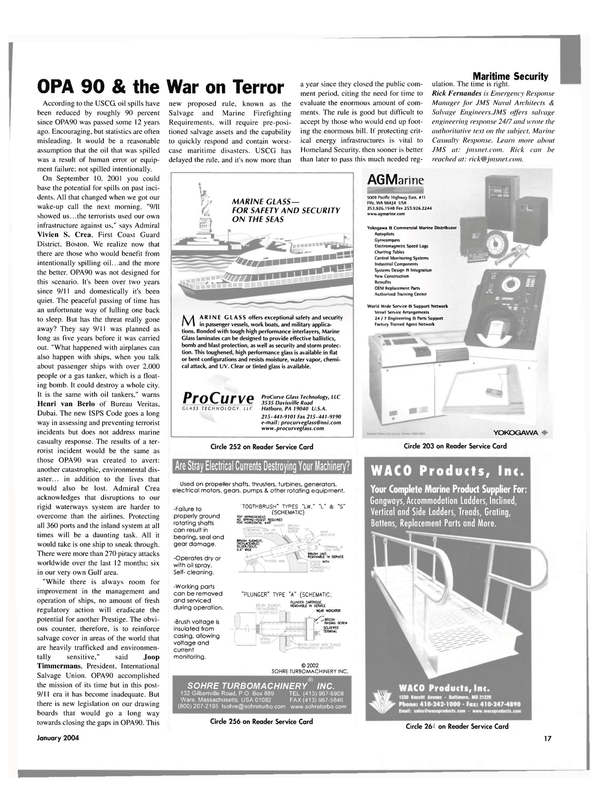 Read OPA 90 & the War on Terror in Pdf, Flash or Html5 edition of January 2004 Maritime Reporter